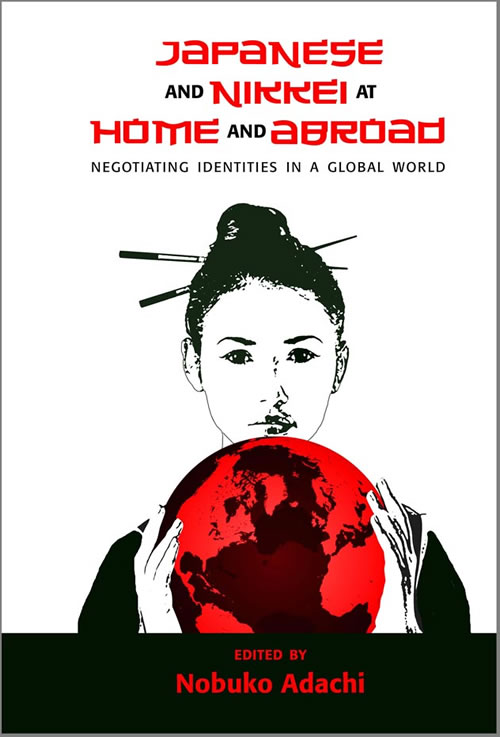 Japanese and Nikkei at Home and Abroad: Negotiating Identities in a Global World by Nobuko Adachi

While previous studies have focused on a few specific and well-known cases, this book examines Japanese transnationalism from a broader perspective, including Japanese nationals living overseas permanently or temporarily, and Europeans of Japanese ancestry who have recently rediscovered their Japanese roots. Specialists from many areas will be drawn to this work on the Nikkei experience and transnational culture and economy.

This book is an interdisciplinary collection of essays on the society and cultures of twenty-first century Japanese transnationals: first-generation migrants (Issei), and their descendants who were born and grew up outside Japan (Nikkei); and Japanese nationals who today find themselves living overseas. The authors—international specialists from anthropology, sociology, history, and education—explore how individual and community cultural identities are deeply integrated in ethnic and economic structures, and how cultural heritage is manifested in various Japanese transnational communities. These essays use individual cases to tackle the bigger issues of personal identity, ethnic community, and economic survival in an internationalized global world. This book, then, offers new perspectives on the anthropology, sociology, history, and economics of an important, though largely under-reported, transnational community.

By looking at the social, cultural, and economic daily activities of Issei, Nikkei, and overseas Japanese individuals and communities within in the larger global context, several questions arise: How do transnational Japanese communities reconstruct their ethnic identities when they relocate themselves in far-flung regions of the world? When do Issei and Nikkei people use or abandon their ethnic identity? How have they constructed their ethnic identity in order to foster the acquisition of social networks in their adopted nations? How have they reformed their ethnic identity in order to protect themselves from the psychological problems of facing discrimination at home and abroad? How do Nikkei people use the cultural connections between Japan and local communities to foster social, economic, and/or political strength? How do transnational migrants of Japanese descent—whether Nikkei in Japan or Japanese nationals abroad—develop individual strategies for personal survival? The essays in this volume explore these issues through the stories of individuals’ struggles to crave out new lives for themselves, both at “home”—however that might be defined—and abroad.

While previous studies have focused on a few specific and well-known cases—for example, the World War II internment of Japanese Americans and their attempts at redress, Japanese agriculture workers in Brazil, or temporary “returnee” dekasegi workers—this book examines Japanese transnationalism from a broader perspective, including Japanese nationals living overseas permanently or temporarily, and Europeans of Japanese ancestry who have recently rediscovered their Japanese roots. Besides looking at Japanese and Nikkei migrants in North and South America, this volume examines some little-explored venues such as Indonesia, Spain, and Germany. The connections among all these Japanese transnational communities—real or imagined are explored ethnographically and historically. And instead of simply focusing on social problems resulting from racial discrimination—and the political actions involved in implementing or fighting it—this volume offers more nuanced dialogue about the issues involved with Japanese transnationalism, in particular how ethnic identity is formed and how Japanese transnational communities have been created, and re-created, all over the world. Also, while until now less attention has been paid to fitting the Japanese case into a larger theoretical framework of globalization and migration studies, the essays presented here—along with a detailed theoretical introduction—attempt to rectify this.

Specialists from many areas will be drawn to this work on the Nikkei experience and transnational culture and economy. These include scholars from Asian studies, Asian-American studies, Japanese studies, ethnic studies, migration, globalization, anthropology, geography, and sociology. This book will also provide a solid resource for graduate and advanced undergraduate courses in any of these disciplines as a supplementary reader. It is likely to attract a strong general readership as well, particularly among those interested in the larger issues of transnationalism, globalization, and the worldwide migrations of people and in the Japanese diaspora.

"Much to commend. In addition to its contribution to the literature on immigration and transnationalism, its highly accessible style and detailed bibliography make it an ideal introduction to the subject, for both undergraduates and the generally interested layperson." - The Journal of American-East Asian Relations

Nobuko Adachi is an assistant professor in the Department of Sociology and Anthropology at Illinois State University and is coeditor of Pan-Japan: The International Journal of the Japanese Diaspora. She received her PhD in anthropology from the University of Toronto. She edited a previous volume of essays on overseas Japanese in 2006 (Japanese Diasporas: Unsung Pasts, Conflicting Presents, and Uncertain Futures) which was also translated into Japanese in 2008. She translated, edited, and annotated “Oh, No! I’m Married to the Company!: Japanese Society as Viewed by its Women by Masako Itoh with James Stanlaw in 2007.


Chapter 3: We Are Children of Nature: Reforming Japanese Cultural Values in a Brazilian Forest (Nobuko Adachi)


Chapter 4: Multicultural Identity in a Global Society: Locality and Nationality of Contemporary Children of the Japanese Diaspora in Germany (Kayko Okamura)


Chapter 5: The Japón Lineage in Spain: Voices from the Unsung Past in the Creation of Identity through Tourism Today (Traci Abraham and Dan Serradilla-Avery)


Chapter 6: Metaphors of Japanese-ness and Negotiations of Nikkei Identity: The Transnational Networking of People of Japanese Descent (Millie Creighton)


Chapter 11: The “Invisible” Japanese in the Heart of the Heartland: Ethnicity as Local Phenomena (James Stanlaw)