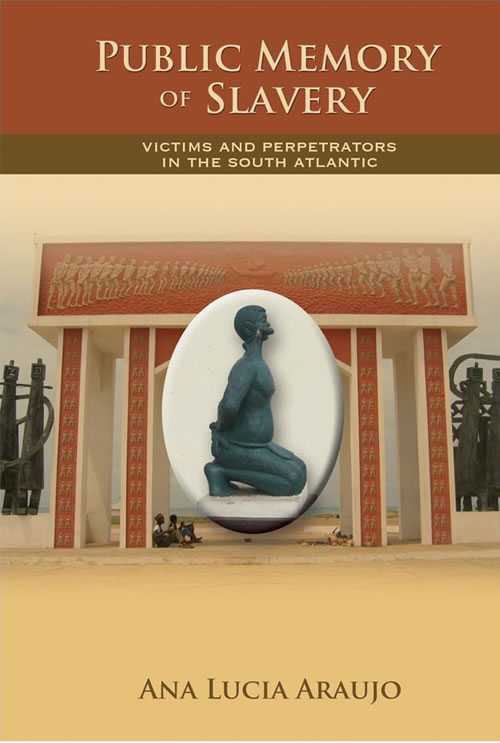 Public Memory of Slavery: Victims and Perpetrators in the South Atlantic by Ana Lucia Araujo

"An important and provocative work. No other study so thoroughly chronicles the fraught and ambiguous history of memorializing slavery in the South Atlantic. Araujo’s ability to ‘read’ multiple sources – both discursive and non-discursive – makes the book truly interdisciplinary in scope. It will be a crucial starting point for all future studies of slavery and memory in Benin and Brazil." – James H. Sweet, Journal of African History

This book examines the public memory of the Atlantic slave trade and slavery encompassing what is modern-day Brazil and the Republic of Benin––two countries connected through more than three centuries of Atlantic slave trade. Brazil imported more than 5 million enslaved Africans (the largest number in all the Americas) and was the latest to abolish slavery in 1888.

Over the last twenty years, Brazil and Benin witnessed the development of official and unofficial projects promoting the memory of slavery and cultural tourism, most of these supported by UNESCO. Official projects largely relied on the promotion of African arts, culture, and religions. Both the Brazilian and the Beninese governments encouraged the restoration and the conservation of historical sites, as well as the construction of new monuments, museums and memorials that would contribute to the reinvention of “Africa” in Brazil and of “Brazil” in Africa.

In Southern Benin, descendants of slaves and descendants of slave merchants––most of them seeking political prestige––appropriated the official discourses that insisted on the duty of memory. Although historically slave ancestry was associated with a sentiment of shame, some prosperous families of descendants of former slave returnees have become more candid and open about their heritage. These elites actively participated in the creation of monuments and memorials, and they also helped in the development of festivals and other commemoration activities to celebrate the Atlantic slave trade and African cultures.

In Brazil, the public memory of slavery is expressed through the fight of Afro-Brazilians to redress the past wrongs and the social inequalities of the present. At the same time, Afro-Brazilian cultural assertion movements are based on the reinvented and reconstructed links with Africa. However, until very recently, the public memory of slavery remained confined to very specific dates and places, such as the Carnival and the Afro-Brazilian religious festivals. Though some public monuments and commemoration activities related to the slave past were created in the last years, the absence of permanent public places in remembrance of slavery, however, indicates that Brazil’s slave past is still difficult to deal with.

If recent scholarship has focused on the memory of slavery in the United States, few works have dealt with the public memory of slavery from a transnational perspective. When examining the role of the African Diaspora in the reconstructions of the slave past, most authors have limited their analysis to the African American community and have overlooked the importance of the South Atlantic region, in which Africa and South America play a crucial role.

In this book, Ana Lucia Araujo argues that despite the rupture provoked by the Atlantic slave trade, the Atlantic Ocean was never a physical barrier that prevented the exchanges between the two sides; it was instead a corridor that allowed the production of continuous relations. Araujo shows that the memorialization of slavery in Brazil and Benin was not only the result of survivals from the period of the Atlantic slave trade but also the outcome of a transnational movement that was accompanied by the continuous intervention of institutions and individuals who promoted the relations between Brazil and Benin. Araujo insists that the circulation of images was, and still is, crucial to the development of reciprocal cultural, religious, and economic exchanges and to defining what is African in Brazil and what is Brazilian in Africa. In this context, the South Atlantic is conceived as a large zone in which the populations of African descent undertake exchanges and modulate identities, a zone where the European and the Amerindian identities were also appropriated in order to build its own nature.

This book shows that the public memory of slavery and the Atlantic slave trade in the South Atlantic is plural; it is conveyed not only by the descendants of the victims but also by the descendants of perpetrators. Although the slave past is a critical issue in societies that largely relied on slave labor and where the heritage of slavery is still present, the memories of this past remain very often restricted to the private space. This book shows how in Brazil and Benin social actors appropriated the slave past to build new identities, fight against social injustice, and in some cases obtain political prestige. The book illuminates how the public memory of slavery in Brazil and Benin contributes to the rise of the South Atlantic as an autonomous zone of claim for recognition for those peoples and cultures that were cruelly broken, dispersed, and depreciated by the Atlantic slave trade.

"An important and provocative work. No other study so thoroughly chronicles the fraught and ambiguous history of memorializing slavery in the South Atlantic. Araujo’s ability to ‘read’ multiple sources – both discursive and non-discursive – makes the book truly interdisciplinary in scope. It will be a crucial starting point for all future studies of slavery and memory in Benin and Brazil." – James H. Sweet, Journal of African History

"A path-breaking work of original research in which Ana Lucia Araujo illuminates the processes, politics, and economics of forgetting and remembering slavery in the South Atlantic ... Enriched by fluency in Portuguese, Spanish, French, and English, Araujo’s multidisciplinary research methodologies include archival digging, close textual reading, onsite analyses, and extensive interviews ... She offers many useful case studies of the complex vexations and rewards of the struggle for meaningful public memorials ... an important book for public historians." – The Public Historian

“Araujo sheds light on the paradoxical understandings of the slave trade in southern Benin and the unintended results of some international efforts to recognise the history of slavery and the slave trade. [This book] makes a useful addition to the literature because the reader is only reminded how much Africans and descendants of Africans have shaped this vast Atlantic world territory through divergent processes of exchange and recreation, occurring both within and beyond the gaze of Western discourse." – Itinerario

"One of the most important contributions of the text is the constant confrontation between the knowledge consolidated by the historiography and the processes of memory disputes, which are object of research ... Public Memory of Slavery has the virtue of pioneer works. It makes a large inventory of transnational movement of memorialization in relation to slavery which is currently underway. Prioritizing the South Atlantic and the case of Benin in particular, the book records without concessions the multiplicity of identities and political interests at stake in conflicts around the memory of slavery." – Afro-Asia

"Araujo’s work is important, as witnessed by what it does and what it evokes." – The Americas

Ana Lucia Araujo is an assistant professor of history at Howard University.

Chapter 1: Impacts of Atlantic Slavery and the Slave Trade

Chapter 2: Plural Memories of Slavery and the Atlantic Slave Trade

Chapter 3: Between Brazil and Dahomey

Chapter 4: Contested Memories of the Slave Trade in Southern Benin

Chapter 7: Forgetting and Remembering the Slave Past