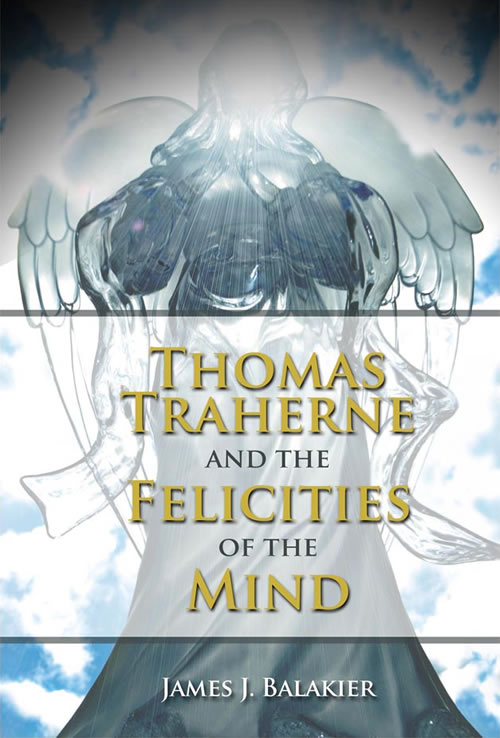 Thomas Traherne and the Felicities of the Mind by James Balakier

The discovery of Thomas Traherne's lost manuscripts at the beginning of the twentieth century aroused an intense interest among poetry lovers and scholars of seventeenth-century literature, which has continued to this day. Praised by CHOICE for being "an accessible study," this is the first book-length study to concentrate on the multiple roles played by Felicity in Traherne's canon, including his far-reaching repudiation of the materialist ideas of Thomas Hobbes.

Thomas Traherne (1637–1674) was one of the most original writers of the early modern period. The exciting discovery of his lost manuscripts at the beginning of the twentieth century aroused an intense interest among poetry lovers and scholars of seventeenth-century literature, which has continued to this day. The finding of other challenging Traherne manuscripts over the course of the century has furthered the study of this remarkable “radically optimistic” figure.

Traherne has been the subject of numerous articles and several books since his manuscripts began to appear, often under remarkable circumstances, over a century ago. Yet while much valuable work has been done and continues to be done on Traherne, he is, in the words of John R. Richards, an “enigmatic” figure about whom there is no consensus. This study seeks to shed light on Traherne’s significance in the cultural/intellectual tradition through a close examination of his favorite subject, Felicity, the secret of gaining which he aims to share with his reader. Thomas Traherne and the Felicities of the Mind is the first book-length study to concentrate on the multiple roles played by Felicity in his canon, including Traherne’s far-reaching repudiation of the materialist ideas of Thomas Hobbes.

The most important contribution of this book is to demonstrate that Felicity is not a simplistic or sentimental notion but is grounded in a cognitive experience, which has been the subject of considerable research in recent decades. The book is framed by an introductory chapter that shows Traherne’s position in the early modern history of a science of cognition and a concluding chapter that relates his discovery of a holistic state of consciousness to twentieth-century theoretical and experimental developments.

The second and third chapters concentrate on what are recognized to be Traherne’s core texts on Felicity, the Centuries and the Dobell folio poem sequence. The analysis of these two works uncovers the deep structures of Traherne’s thought and sets the stage for the examination of other texts relevant to his foremost subject, Felicity. The fourth chapter investigates the seminal part played by Felicity in other poetry and prose, including Traherne’s Felicity-based ethical treatise Christian Ethicks and the encyclopedic Commentaries of Heaven, which combines poetry with prose. Also included in this investigation are poems which, in effect, constitute another sequence––albeit a sequence badly edited by Traherne’s brother Philip after Traherne’s death. The subsequent chapter explores the presence of Felicity in texts contained in the Lambeth manuscript, discovered at the end of the twentieth century. These texts confirm the intellectual depth and sublime artistry with which Traherne communicated his cognitive breakthrough.

Thomas Traherne and the Felicities of the Mind is an important, timely addition to all literature and British cultural collections.

"Balakier offers an accessible study ... [with] his careful explication of the poetry and prose. Recommended." - CHOICE

"Balakier’s analysis admirably contemporizes Traherne’s work with an audacity that, with a few notable exceptions, remains too rare among critics." - Seventeenth-Century News

James Balakier is an associate professor of English literature at the University of South Dakota. He holds a PhD and an MA from Ohio University and a BA from St. Vincent College. Dr. Balakier’s previous publications include The Competing Epistemologies of Thomas Traherne and Thomas Hobbes: The Grounds of Felicity; Traherne, Husserl, and a Unitary Act of Consciousness; James Thornhill’s The Glorification of William and Mary: A Newtonian Spatial Allegory, which was coauthored with Dr. Ann Stewart Balakier; and The Spatial Infinite at Greenwich in Works by Christopher Wren, James Thornhill and James Thomson: The Newton Connection, which was also coauthored by Dr. Ann Stewart Balakier.

Chapter 4: The Role of Felicity in the Non-Dobell Burney Poems, Christian Ethicks, and Commentaries of Heaven