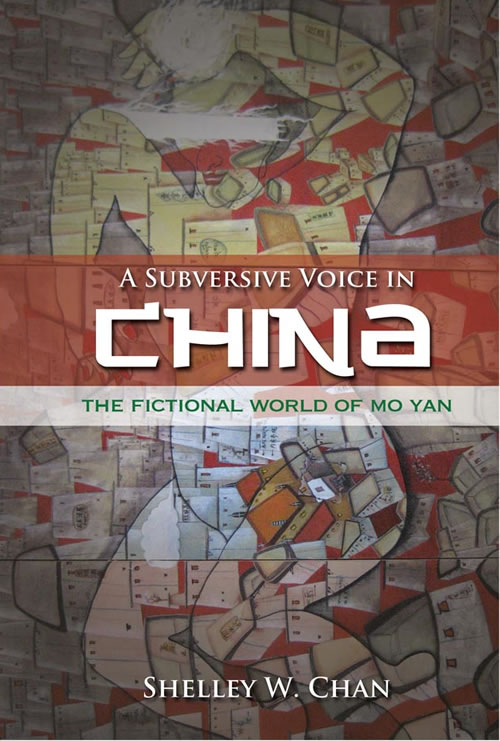 A Subversive Voice in China: The Fictional World of Mo Yan by Shelley W. Chan

"I recommend this first full-length study in English to anyone who wants the perfect complement to their reading of Mo Yan’s novels." — Howard Goldblatt, University of Notre Dame

Mo Yan, winner of the 2012 Nobel Prize in literature, the most prolific writer in present-day China as well as one of its most prominent avant-gardists, is an author whose literary works have enjoyed an enormous readership and have caught much critical attention not only in mainland China, Hong Kong, and Taiwan but also in many other countries around the world.

Mo Yan has published eleven novels to date: Honggaoliang jiazu [The Red Sorghum Family] (1987), Tiantang suantai zhi ge [The Garlic Ballads] (1988), Shisan bu [Thirteen Steps] (1989), Jiuguo [The Republic of Wine] (1992), Shicao jiazu [The Herbivorous Family] (1994), Fengru feitun [Big Breasts and Wide Hips] (1996), Hong shulin [Red Grove] (1999), Tanxiang xing [Sandalwood Punishment] (2001), Sishiyi pao [Forty-One Bombs] (2003), Shengsi pilao [Life and Death Are Wearing Me Out] (2006), and Wa [Frog] (2009). In addition to these novels, he is the author of a large corpus of novellas and short stories. Thus far, five of Mo Yan’s novels and a considerable number of his novellas, short stories, and essays have been translated into English. Furthermore, his works have also been translated into many other languages, including French, German, Italian, Spanish, Japanese, Korean, and Vietnamese.

One of his most acclaimed novels, The Red Sorghum Family, was selected by the magazine World Literature Today as one of the “Top 40” in its first 75 years of publication and as the best of 1987. This novel was also adapted for film by the internationally known director Zhang Yimou, and the film won the Golden Bear Award at the 1987 Berlin International Film Festival––the first major international prize awarded to a post-Mao Chinese film. Zhang Yimou also adapted Mo Yan’s “Shifu, You’ll Do Anything for a Laugh” for the silver screen as a film entitled Happy Times, for which the director won the Fipresci Prize and the Silver Spike at the Valladolid International Film Festival in 2000.

Another movie Nuan, adapted from Mo Yan’s novella “White Dog and the Swings,” received the grand prize for best film––the Tokyo Grand Prix––at the Tokyo International Film Festival in 2003. Mo Yan himself is the winner of various prestigious awards, including the inaugural Newman Prize for Chinese Literature in 2009, the first major American award for Chinese literature. Emerging in the mid-1980s as a young experimental writer, Mo Yan has since become a veteran and one of the most celebrated Chinese writers today––recognized for his diligence and artistic achievements. As the most successful fiction writer in China, his talent, rich with creative enthusiasm, continues to flourish. While other writers gradually stop writing or switch to other professions, Mo Yan continues his writing career, surprising readers and critics with a new masterpiece every two to three years. Categorized by critics as a root searcher, a modernist, an expressionist, and a magic realistic writer, Mo Yan, however, is a multifaceted novelist whose works cannot be easily pigeonholed.

This book provides the most comprehensive exposition of Mo Yan’s fiction in any language. Author Shelley Chan delves into Mo Yan’s entire collection of literary works, considering novels as well as short stories and novellas. In this analysis, Mo Yan’s works are dealt with in a diachronic fashion––Chan discusses the development of Mo Yan’s style throughout his career by considering themes that he has addressed in a variety of narratives over time. This provides the reader with valuable insight into understanding how individual narratives fit into the entire collection of Mo Yan’s body of literary work. Scholars will also welcome the book’s extensive reference to secondary scholarship and theory, which not only skillfully deals with the Chinese scholarship on Mo Yan but also thoroughly covers the English-language sources.

This book on one of the most important figures in contemporary Chinese literary history will be a landmark resource for scholars in Asian studies, cultural studies, and literary criticism, as well as an enticing read for people interested in Chinese literature and historical fiction.

“I recommend this first full-length study in English to anyone who wants the perfect complement to their reading of Mo Yan’s novels.” — Howard Goldblatt, University of Notre Dame

Shelley Wing Chan is an associate professor of Chinese language and cultural studies at Wittenberg University. She teaches courses in Chinese language, literature, and culture. A graduate of Hong Kong Baptist University, she earned her PhD in comparative literature and humanities from the University of Colorado–Boulder and her Master’s degree in East Asian languages and literature from the University of Wisconsin–Madison. She has taught Mandarin Chinese and Chinese literature at Stanford University, the University of Colorado-Boulder, Beloit College, and Kalamazoo College. She specializes in modern and contemporary Chinese literature, culture, and language pedagogy. Dr. Chan has also carried out research on Tang poetry and popular literature of the Ming Dynasty and has studied and written about gender issues from a cross-cultural perspective. Her articles and translations have appeared in both the U.S. and Hong Kong. Dr. Chan has also presented scholarly papers at professional conferences for the Association for Asian Studies, the Modern Language Association, the American Comparative Literature Association, and the American Oriental Society.

Chapter 3: There Is No End of Violence

Chapter 4: “It Is Hard Not to Write Satire”: In a World of Vice and Folly