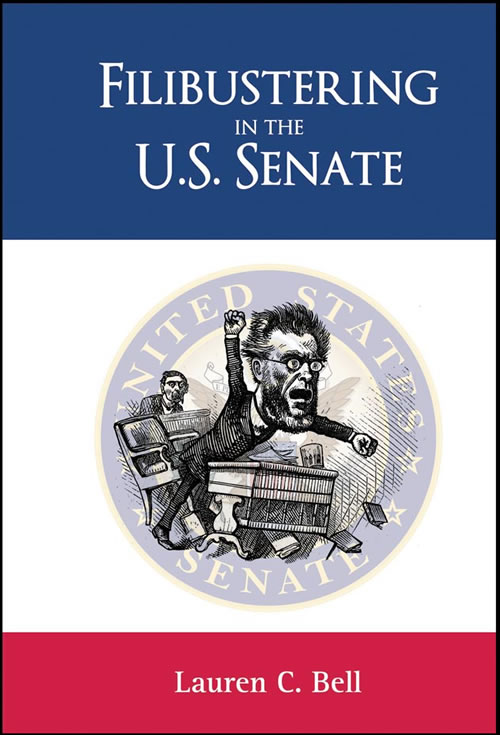 Filibustering in the U.S. Senate by Lauren C. Bell

"Bell’s exhaustive identification of all filibusters in Senate history, who led them, and the substantive issues they involved represents an invaluable contribution to our understanding of this particular form of legislative obstruction. This book is well-written and accessible, it provides new data that will be of great value to future researchers, and it provides the first analysis of the predictors of individual-level decisions to filibuster across all issue areas over an extended time period." - Congress and the Presidency

The filibuster—an intentional obstruction of the United States Senate leadership’s ability to move legislation through the chamber’s legislative process—is one of the Senate’s most defining institutional features. Throughout history, filibusters have been waged on many significant public questions, including the expansion of civil and political rights, nominations to the executive and judicial branches, and even whether or not to go to war. The filibuster has been romanticized on film in Mr. Smith Goes to Washington (1939) and vilified as a threat to American democracy by pundits and political observers. In the first decade of the twenty-first century, Senate leaders even threatened their colleagues with “nuclear” attacks on the filibuster designed to fully reshape the Senate’s legislative procedure.

And yet, the filibuster is neither as romantic as its defenders have suggested nor as problematic as its detractors would make it seem. In reality, filibusters are rare; from the beginning of the republic through the middle part of the twentieth century, filibusters occurred, on average, less than once per two-year Congress. And, while the number of filibusters has increased markedly in the last quarter century, the Senate still prosecutes the overwhelming majority of its agenda with relative dispatch.

Filibusters capture the public’s attention because they are dramatic, they deviate from the principle of majority-rule, and they are often led by very colorful individuals. Still, relatively little is known about the filibuster, and even less is known about the factors that affect whether a measure will be subject to a filibuster, or the factors that lead some senators to filibuster frequently while many senators never engage in such dilatory tactics. Filibusters today do not have nearly the dramatic cache of the earlier filibusters captured by Jimmy Stewart in Mr. Smith Goes to Washington, but they do provide important insights into senators’ representative behavior.

The dearth of scholarship on the filibuster results from the fact that not only are filibusters rare, but in addition, until now there has not been a comprehensive list of filibusters available to scholars to enable the individual-level analysis of senators’ filibuster decisions that is so crucial to understanding filibustering in the U.S. Senate.

This book remedies the near-complete lack of individual senator-level data available to scholars. Moreover, the dataset that Bell compiles represents a much more comprehensive list of Senate filibusters than any that has previously been compiled. Data are available for the entirety of the period from 1790 to 2008. The text provides a fully current (through the end of the 110th Congress) list of Senate filibusters from the first recorded instance in 1790. This new list undergirds a comprehensive historical analysis of filibusters and a full exploration of both micro-level (individual senator) determinants of filibustering and macro-level (institutional) factors that affect filibustering and its consequences.

Beyond compiling and sharing the raw data on who filibusters what, Bell demonstrates that senators’ filibustering behavior is frequently an extension of senators’ legislative behavior more generally. The book makes it clear that filibustering is simply one strategy among many that senators employ as they try to advance their sometimes competing goals of representing their constituents, serving their political parties, and crafting good legislation. Building on work by Franklin L. Burdette (1940), Richard S. Beth (1994), and Gregory Wawro and Eric Schickler (2006). Filibustering in the US Senate offers a readable, accessible analysis that clarifies the meaning of important terms and offers practical insights into the uses—and abuses—of Senate legislative procedures.

The timeliness of Filibustering in the US Senate, its interesting subject matter, and the accessible nature of the analysis will appeal to general and professional readers of political studies, as well as to practitioners in government.

"Bell’s exhaustive identification of all filibusters in Senate history, who led them, and the substantive issues they involved represents an invaluable contribution to our understanding of this particular form of legislative obstruction. This book is well-written and accessible, it provides new data that will be of great value to future researchers, and it provides the first analysis of the predictors of individual-level decisions to filibuster across all issue areas over an extended time period." - Congress and the Presidency

"The author’s historical analysis of the filibuster is important, ... [it] clearly demonstrates how institutional factors, such as party control of government and publicity of the Senate’s actions, have influenced filibustering in the post-cloture era. These findings are further supported by quantitative models employing data from the 80th-110th Congresses ... The power of Bell’s book is its ability to seamlessly weave historical and quantitative evidence in an effort to build a theory of filibustering. Furthermore, Bell’s use of qualitative and quantitative evidence significantly strengthens her causal arguments. Overall, this book produces a nuanced picture of filibustering in the Senate, and helps us to better understand some of the myths surrounding this contentious legislative practice." – APSA Legislative Studies Section

Lauren Cohen Bell is professor of political science and associate dean of the College at Randolph-Macon College. She holds a PhD and an MA from the Carl Albert Congressional Research and Studies Center at the University of Oklahoma and a BA from The College of Wooster. Dr. Bell is the author of Warring Factions: Interest Groups, Money, and the New Politics of Senate Confirmation and The U.S. Congress, A Simulation for Students, as well as co-author of Perspectives on Political Communication: A Case Approach. Her work has appeared in several journals, including Journal of Politics, Political Research Quarterly, The Journal of Legislative Studies, The Journal of Public Administration Research and Theory, and Judicature. Dr. Bell served as an American Political Science Association Congressional Fellow on the United States Senate Committee on the Judiciary during the 1997– 1998 academic year and was the United States Supreme Court Fellow at the United States Sentencing Commission in Washington, DC in 2006–2007.