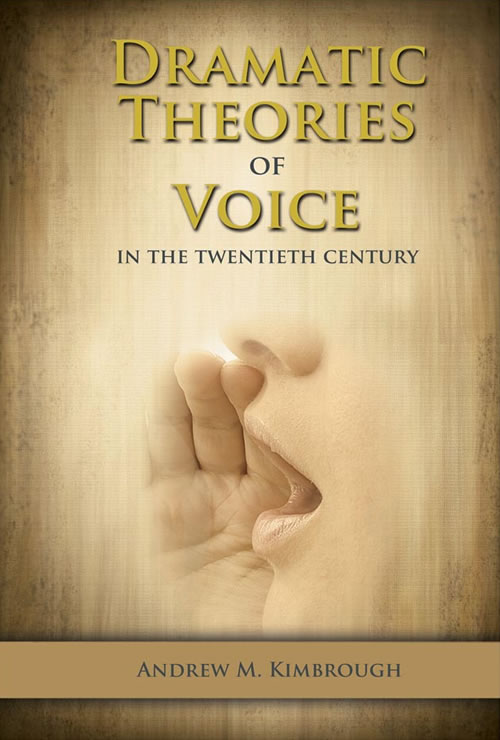 Dramatic Theories of Voice in the Twentieth Century by Andrew Kimbrough

“An exceptional book, presenting philosophical and scientific theories of voice in an approach that is both accessible to young scholars and useful to those already familiar with its source texts. Kimbrough … reveals critical insights into the topic … a useful resource for theatre scholars and eminently suitable for assignments in graduate and undergraduate courses in performance theory.” – Theatre Journal

The problem of language constituted the most contentious subject of the philosophies and human sciences in the twentieth-century and drove what came to be known as the “linguistic turn” to Western thought. Phenomenology, linguistics, analytic philosophy, speech act theory, anthropology, psychology, poststructuralism, media studies, and ordinary language philosophy—all addressed language as the primary vehicle of human thought and communication, and queried whether any accurate linguistic representation of reality were possible. The sound of the human voice lay at the center of the debate. The central question raised by Husserl’s phenomenology and de Saussure’s linguistics, and discussed throughout the century, concerned whether the sounds of the voice were intrinsic to meaning or were simply relative. In a related phenomenon, vocal experimentation marked the twentieth-century avant garde, which included the nonsense verbal texts of Dada; the electronic mediations of Samuel Beckett and Peter Handke; and the playful, ironic, and confrontational performances of Laurie Anderson, Karen Finley, and the Wooster Group. The experiments mirrored the fixation with voice and language as expressed in the philosophies and sciences.

Yet despite the centrality of the voice for the philosophy of language, linguistic study, and performance, no book-length study before now has focused solely on vocal expression. The voice ranks with gesture as one of two media of communication available to every fully able-bodied human being, and yet theatre studies tends to take a visual approach to its objects of critique: the body, the dramatic text, and the mise-en-scène. Because the voice registers as a crucial media of expression in the theatre, theatre studies also can provide valuable contributions to the discussion of voice and language undertaken in other disciplines. The theatre as a social and public art form reveals a great deal about what we think and feel in regards to our communications with each other.

Dramatic Theories of Voice in the Twentieth Century is the first book of theatre studies to identify and articulate theories of voice as expressed in the philosophies, human sciences, and physical sciences of the twentieth century. It also identifies parallels between the theories and the vocal practices of twentieth-century performances that shared similar concerns with issues of language and mediation. This book adopts as a central premise that the introduction and proliferation of electronic forms of communication stimulated the interest in voice and language in the scholarly discourses of the twentieth century and stimulated as well the fascination with the sounds of the voice as expressed in the twentieth-century avant garde.

Dramatic Theories of Voice in the Twentieth Century is the only book of theatre and performance studies to address the sounds of the human voice and as such ranks as an invaluable addition to all theatre, philosophy, performance studies, communications, and cultural studies collections.

“An exceptional book, presenting philosophical and scientific theories of voice in an approach that is both accessible to young scholars and useful to those already familiar with its source texts. Kimbrough … reveals critical insights into the topic … a useful resource for theatre scholars and eminently suitable for assignments in graduate and undergraduate courses in performance theory.” – Theatre Journal

Andrew Kimbrough is an assistant professor of theatre at the University of Kentucky. He holds a PhD from Louisiana State University, an MFA from Carnegie Mellon University and the Moscow Art Theatre School, and a BA from Wake Forest University. Dr. Kimbrough’s previous publications include articles on dramatic theory and voice pedagogy in The Voice and Speech Review and articles on dramatic literature, cognitive science, and contemporary performance in China in such journals as The Drama Review, Journal of Dramatic Theory and Criticism, Theatre Topics, and Theatre Symposium.

Dramatic Theories of Voice: An Introduction

Chapter 2: The Voice in Phenomenology and Existentialism

Chapter 3: The Voice in Theatres of Presence

Chapter 5: The Literarized Voice of the Modernist Stage

Chapter 7: The Voice of the Postmodern Stage