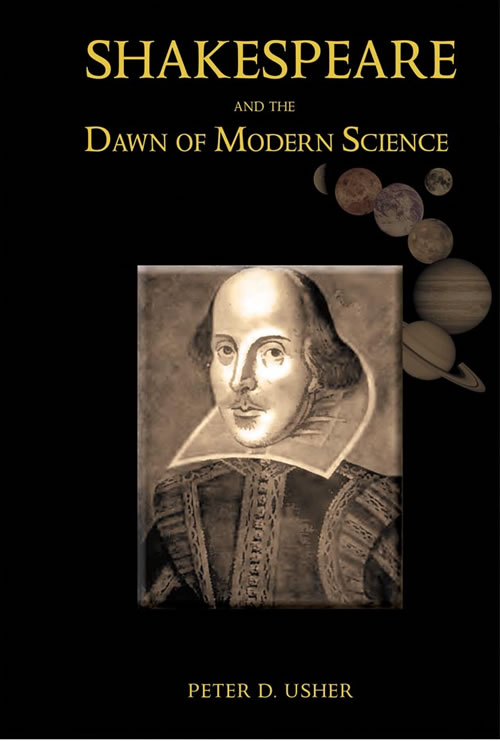 Shakespeare and the Dawn of Modern Science by Peter Usher

In this book, renowned astronomy expert Peter Usher analyzes five plays, Hamlet, Love’s Labour’s Lost, Cymbeline, The Merchant of Venice, and The Winter’s Tale. With painstaking thoroughness, he dissects the plays and reveals that, contrary to current belief, Shakespeare was well aware of the scientific revolutions of his time.

In the mid-sixteenth century, Nicholas Copernicus broke from the traditional view that the Earth rested immobile at the center of the Universe by placing the Sun there instead. As the Earth lost its privileged position, so did humankind, prompting a reevaluation of all branches of learning in which humans considered themselves the center of attention.

Shakespeare’s writing career began about a half-century after this revolution in worldview. The bard is knowledgeable in many different areas of learning and is oftentimes ahead of his contemporaries, yet his Canon appears to lack a coherent account of contemporary cosmological thinking. It is simply not credible that a poet of this stature could remain ignorant of the cultural impact that the New Astronomy was having in his lifetime––or if he were not so ignorant that with all the literary devices at his command, he would refrain from addressing the topic.

In Shakespeare and the Dawn of Modern Science, renowned astronomy expert Peter Usher expands upon his allegorical interpretation of Hamlet and analyzes four more plays, Love’s Labour’s Lost, Cymbeline, The Merchant of Venice, and The Winter’s Tale. With painstaking thoroughness, he dissects the plays and reveals that, contrary to current belief, Shakespeare was well aware of the scientific revolutions of his time. Moreover, Shakespeare imbeds in the allegorical subtext information on the appearances of the Sun, Moon, planets, and stars that he could not have known without telescopic aid, yet these plays appeared coeval with or prior to the commonly accepted date of 1610 for the invention and first use of the astronomical telescope.

Dr. Usher argues that an early telescope, the so-called perspective glass, was the likely means for the acquisition of these data. This device was invented by the mathematician Leonard Digges, whose grandson of the same name contributed poems to the First and Second Folio editions of Shakespeare’s plays.

Shakespeare wrote at a time when the Early Modern European worldview derived from a rigid interdependence of theology and natural philosophy, so that new ideas about the physical world readily devolved into threats to the divine order. Empiricists who offered new insights risked charges of heresy, and it was prudent therefore to keep discoveries under wraps. Caution was the watchword for those engaged in experimental or observational science, as it was also for anyone who might be tempted to publicize the findings. Information that both verified the theory of heliocentricism and that conflicted with theological doctrine was inflammatory.

It is understandable, therefore, that Shakespeare would allegorize it, for doing so would protect both him and the source of information. The book ends by examining the relationship between the Digges family and Shakespeare, a relationship that helps to elucidate the circumstances under which the playwright accomplished his labors of love.

Shakespeare and the Dawn of Modern Science is an important addition to literature, history, and science collections as well as to personal libraries.

Chapter 5: The Merchant of Venice