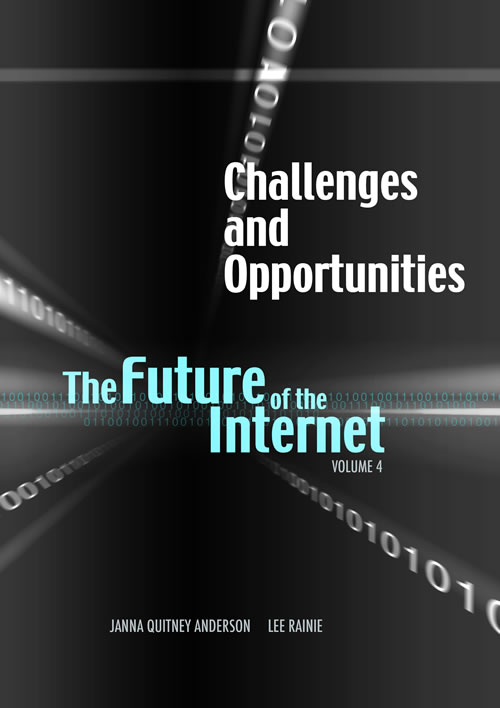 Challenges and Opportunities: The Future of the Internet, Volume 4 by Janna Quitney Anderson and Lee Rainie

Is Google making us stupid? What is the future of intelligence in the age of instant information? This and other important issues were addressed by nearly 900 expert respondents who wrote compelling answers to the 10 questions asked in the Future of the Internet IV survey, including their views on the evolution of intelligence and the rendering of knowledge.

Challenges and Opportunities: The Future of the Internet, Volume 4 is the fourth volume in a series on the future of communications by the Pew Internet & American Life Project and Elon University.

Is Google making us stupid––what is the future of intelligence in the age of instant information? This and other important issues were addressed by nearly 900 expert respondents who wrote compelling answers to the 10 questions asked in the Future of the Internet IV survey. Technologists, business leaders, scholars and others shared their views about the Internet and the evolution of: intelligence; reading, writing and the rendering of knowledge; identity and authentication; gadgets, applications and the predictability of innovation; personal and social relationships; industrial-age institutions; cloud computing; the Semantic Web and Linked Data; Generation Y, also known as the Millennials; and the core values of the Internet, such as the end-to-end principle. This book is an extension of and deeper look at the results of six Pew Internet/Imagining the Internet Center reports generated from the survey in 2010.

About the series: Technology builders, entrepreneurs, consultants, academicians, and futurists from around the world share their wisdom in The Future of the Internet surveys conducted by the Pew Internet & American Life Project and Elon University. The series of surveys garners smart, detailed assessments of multi-layered issues from a variety of voices, ranging from the scientists and engineers who created the first Internet architecture a decade ago to social commentators to technology leaders in corporations, media, government, and higher education.

Janna Quitney Anderson is an associate professor at Elon University’s School of Communications and the director of Imagining the Internet, a Webby Honors–winning online compilation of survey studies and documentary videos illuminating the future of the Internet. This project, launched in 2003, is where the Future of the Internet studies were first introduced. She has written articles for USA Today, Advertising Age, and the New York Times and is author of the book Imagining the Internet. She serves on the editorial board of Newspaper Research Journal, is a reviewer for New Media & Society, and is a contributor to State of the Future reports. She is the winner of several national and international awards for Web design and content.

Summary of Findings and Survey Approach

Scenario 1: The Internet and Evolution of Human Intelligence

Scenario 2: The Evolution of the Cloud and the Desktop

Scenario 3: The Internet and the Future of Social Relations

Scenario 4: The Evolution of the Rendering of Knowledge

Scenario 5: The Evolution of Millennials’ Use of the Internet

Scenario 6: The Evolution of Internet Impact on Institutions

Scenario 7: The Internet and the Future of Anonymity Online

Scenario 8: The Evolution of the Semantic Web

Scenario 9: The Predictability of Online Innovation

Scenario 10: The Future of the Internet’s End-to-End Principle 3