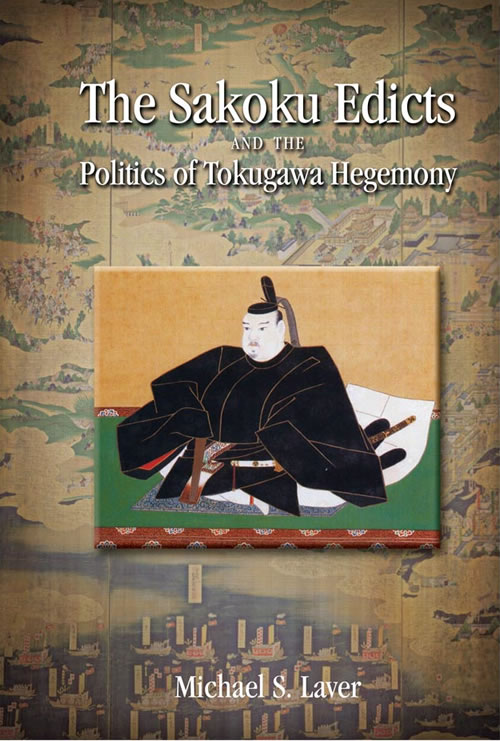 The Sakoku Edicts and the Politics of Tokugawa Hegemony by Michael S. Laver

"This book offers an accessible overview of foreign relations in the first half of the seventeenth century and therefore would be useful in an undergraduate survey." —Journal of Asian Studies

In the major literature on early modern Japan, the sakoku (closed country) edicts lurk in the background, and while scholars are generally aware of the major tenets of the policy, for example, the inability of Japanese to travel abroad or the clampdown on Christianity, the specifics of the edicts have yet to be studied in detail despite its potential to reveal much about this era of Japan’s history. This work seeks to clarify the seventeen-article sakoku edicts of 1635 as well as to situate the edicts in the general foreign policy of seventeenth-century Edo Japan. This book will also examine a number of other policies that evolved in the first half of the seventeenth century to complete what is commonly (and somewhat erroneously) referred to as the “closed-country period.”

A great number of works on European and Chinese interactions with Japan have appeared over the past few decades, and most of them have done a fine job of dispensing with the myth that Japan was somehow hermetically sealed from the outside world. Scholars are aware that the Dutch played a large role in keeping the shogun informed about affairs in Europe, and that the Chinese were coming to Japan in ever greater numbers. They are also aware of the relationship between Japan and Korea. However, the fact remains that the Tokugawa did take pains to regulate the interactions of Europeans with Japan, and these measures are generally found in the various edicts passed by the bakufu in the first half of the seventeenth century.

This book translates and illuminates the specific machinery of Japan’s foreign relations, especially as it pertained to European trade and Christianity. In so doing, this study will situate the edicts––which are largely taken for granted, even though little has been studied––in Japan’s early modern history.

There are two insights this book presents. First of all, the study will demonstrate that the sakoku edicts were not a monolithic piece of legislation, but rather they evolved over time. The edicts against Christianity, the expulsion of the Spanish and the Portuguese, and the establishment of the machinery to regulate foreign trade were all responses to historical stimuli, and as such evolved in response to Japan’s interactions with Europe and European trade and ideas. Second, this work will show that, ironically, the Tokugawa control of Japan’s foreign policy was meant to strengthen its domestic control, especially vis-à-vis the powerful daimyo of western Japan, who traditionally profited with relations with the West. Therefore, there is much more to the sakoku edicts than simply the regulation of Japan’s relations with foreigners.

This book will appeal to the wider academic community working on pre-modern and early modern Japan. It will also be of value to those whose work involves the expansion of Europe into Asia, as well as European-Asian interactions. Written in a highly accessible style, this book will be of interest to even the casual reader of Japanese history.

"This book offers an accessible overview of foreign relations in the first half of the seventeenth century and therefore would be useful in an undergraduate survey." —Journal of Asian Studies

Michael S. Laver is an assistant professor of history at the Rochester Institute of Technology (RIT). Prior to this appointment, he was an assistant professor at the University of Wisconsin-Stevens Point. He earned his PhD and MA at the University of Pennsylvania and his BA at Purdue University. Dr. Laver specializes in East Asian languages and civilizations and has published another book on Japanese history, Japan's Economy by Proxy in the Seventeenth Century.