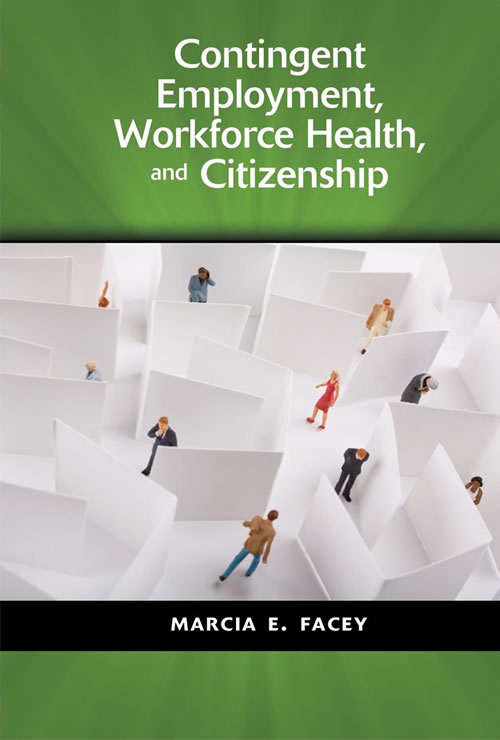 The increasing prevalence of contingent work has prompted concerns about its health implications for contingent workers.The research reported in this book casts light on the discrepant health-related findings by examining contingent work from the perspective of workers, through an exploration of how they experience and understand this form of work and how these experiences and understandings might affect health. The study revealed a strong discursive aspect to workers’ experience, and these discourses are the focus of this book.

This book offers an account of the social production of (ill) health. The author theorises how health and ill-health can be produced via the interaction of individual-level discourses of contingent work and broader socio-political contexts. One of the most important changes affecting work and workers in (non)industrialized countries over the last two decades is the spread of contingent forms of work. Contingent employment is a mode of work organisation characterised by transitory employment relationships, such as short- or fixed-term contracts, part-time, casual/on-call, self-employment, seasonal, and temporary help agency work. It emerged as a significant form of employment in the context of the global capitalism–– globalisation of trade, investment, production, intensified economic competition, and associated corporate responses such as organisational restructuring, downsizing, and outsourcing. In Canada, contingent work accounts for 13% of total employment, up from 9.7% in 1998. In the United States, upwards of 30% of workers are engaged in some form of contingent work. Similar labour market shifts are apparent in European countries.

The increasing prevalence of contingent work has prompted concerns about its health implications for people who do these types of work. Nonetheless, the relationship between contingent work and health is poorly understood because existing research findings are inconsistent or inconclusive. One body of literature suggests that it has detrimental effects on the health, safety, and well-being of workers.

Another––albeit more modest––body of literature suggests that contingent work might be beneficial for health because it has been associated with less stress and fewer mental health problems, lower levels of somatic complaints, and better self-rated health.

The research reported in this book casts light on these discrepant health-related findings by examining contingent work from the perspective of workers, through an exploration of how they experience and understand this form of work and how these experiences and understandings might affect health. The study revealed a strong discursive aspect to workers’ experience, and these discourses are the focus of this book. A theoretical premise of this study is that experience is inseparable from discourse. In other words, the language in which workers articulate their experience both constitutes and reflects that experience––how they experience their work is embodied in their discursive practices for talking about it. Thus, their experience can be understood, at least in part, through an analysis of the discourses of which they avail themselves. Informed by a constructionist theoretical perspective, the book describes and discusses the different kinds of discourses workers use to portray their experience of contingent work and how these discourses are related to evaluations of contingent work as inferior or stigmatized work and to broader socio-political and economic contexts.

Another assumption of this study is that discourses are inseparable from the broader socio-political contexts in which they are constructed; indeed they exist in a recursive relationship with these social contexts. The findings reveal how individual-level discourses about contingent work shape, and are shaped by, neoliberal rationalities. That is, how individuals talk about and experience their work is formed in important ways by broader societal conceptions of work and citizenship. In turn, their individual discourses constitute and reinforce these existing societal notions. With arguments premised on the theoretical assumption that discourse is a form of social action, the book argues that the discourses of contingent work constitute a form of management of stigmatised work and that they cast workers as different kinds of citizens. It concludes with a discussion of the health implications of these neoliberal-inspired discourses.

This book will be an important addition to collections in public health and public policy.

Marcia E. Facey is an assistant professor in the Faculty of Nursing at the University of Toronto, Canada. Her research foci include contingent/precarious forms of work, occupational health and safety, unconventional workplaces, the work and health of health care workers, and the application of critical social theories these issues. Dr. Facey has published in journals such as the Canadian Journal of Public Health, Social Theory & Health, and Health & Place.

Chapter 2: The “Contingent Work” Employment Relationship and its Implications

Chapter 7 : Discourses of (Dis)advantage and Citizenship