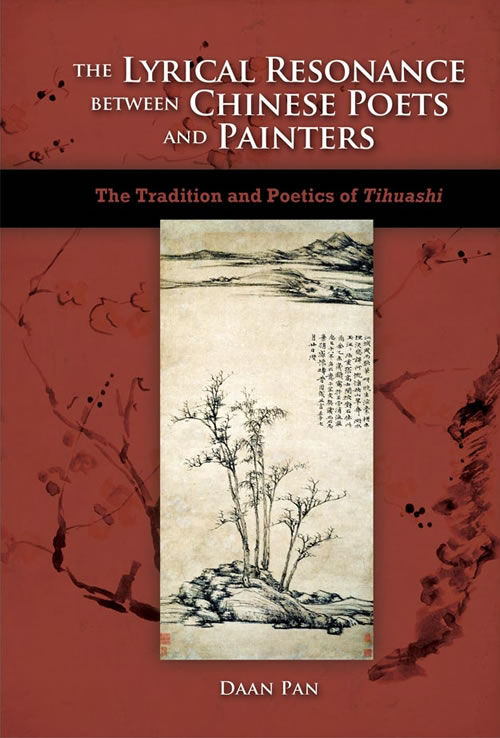 The Lyrical Resonance Between Chinese Poets and Painters: The Tradition and Poetics of Tihuashi by Daan Pan

"The depth of insight that this book provides into the increasingly complex interrelations between the “Three Absolutes” (sanjue: poetry, painting, and calligraphy), especially between the first two, far surpasses any previous English-language study of the subject." - Journal of Asian Studies

Arising from the lyrical resonance between poets and painters, Chinese tihuashi (literature, specifically poetry, written about painting) engages painting in various ways, representing (or re-creating) painterly scenes, appraising the painter’ artistry (or personality), or expressing poetic sentiment inspired by paintings. As an interartistic genre associated with almost all genres of painting, tihuashi enriches discourses in Chinese art criticism, art history, and art connoisseurship by addressing many aspects of painting. Through its congenial dialogue with painting, tihuashi has helped nurture a sisterly rapport between Chinese poetry and painting, facilitated a lyrical resonance between the two arts, and ultimately contributed to a total art integrating poetry, painting, calligraphy, and seal engraving.

Along with the painterly genres of tishihua (painting inscribed with poems) and shiyitu (painting rendering the ideas or themes of poems), tihuashi has fostered a heightened awareness among Chinese artists of the mutually inspiring and mutually enhancing power of poetry and painting, setting a fashion for these two arts to achieve ideational as well as formal unity. By virtue of its historical contributions to both arts and its influence on Chinese artists, tihuashi should be studied and appreciated not merely within its own genre but rather in the larger, holistic context of the Chinese interartistic tradition. It is in this context that this book examines the various historical and sociocultural factors contributing to the formation and flourishing of this genre, while also exploring its theoretical underpinnings as well as underlying cultural values.

An essential component of literati art, tihuashi embodies the holistic values peculiar to traditional Chinese aesthetics, in which interartistic mutuality and unity are of central significance. It provides a unique vantage point whereby the poetry-painting relationship can be examined in terms of its multi-faceted significance. As an interartistic subject tihuashi proves indispensable for researches on Chinese poetry and painting. Adopting painting as its subject or subject matter, tihuashi also explores individual Chinese paintings in terms of their provenance or brush work techniques. Some poems from this genre may be used as frames of reference for verifying the authenticity of some existing paintings or provide valuable clues to some lost paintings whose original format and content remain undetermined. An intimate knowledge of this genre also helps cultivate refined sensibilities and connoisseurship in Chinese art.

This book is the first book-length study in English that addresses the subject of Chinese tihuashi exclusively through inquiries of historical and critical synthesis. Shedding interartistic and cross-cultural light on this genre, it is a concise pioneering study intended to provoke further research on tihuashi and also pave the way for a study of its comparability with ekphrastic poetry.

Included in this book are the relevant Chinese texts, which will enhance the reader’s appreciation of the Chinese poetry-painting relationship in the holistic context of Chinese culture, while also developing holistic and comparative perspectives on literature and art in general.

This is an important book for all Chinese art, Chinese literature, and East Asian collections. It can be used as a reference book for both scholarly research and college-level teaching.

"An extremely rewarding read,even an eye-opening one ... Pan’s excellent translations of numerous tihuashi (poems written on paintings), along with his incisive and nuanced commentary, show us that painting occupied a central role in literaticulture, and was at times even instrumental in that culture’s development ... The depth of insight that this book provides into the increasingly complex interrelations between the “Three Absolutes” (sanjue: poetry, painting, and calligraphy), especially between the first two, far surpasses any previous English-language study of the subject." - Journal of Asian Studies

“This is the most comprehensive and insightful study on this topic in any language and the first written in English. In addition to its scholarly value, Professor Pan’s book opens a window to a picturesque poetic world for Western readers who are interested in Chinese poetry and painting.” – Zu-yan Chen, Professor of Chinese Literature, Binghamton University

“In this book, Professor Pan provides a rare treat for the English-language reader with valuable information regarding this hitherto under-represented subject. He lucidly traces the development of this border-crossing genre from its prototype works to its maturity in the Tang Dynasty (618–907) and the subsequent expansion in late imperial China. He illustrates the tihuashi poetics of the master bard Du Fu (712–770) and that of the virtuoso poet-artist-philosopher Su Shi (1037–1101). Most remarkable of his contribution is the generous number of faithfully translated poems, all with great clarity and elegance. This book will help the reader better understand the relationship between Chinese painting, calligraphy, and poetry; the interartistic, intertextual, and interdisciplinary characteristics of tihuashi; the cultural milieu of its creation; and its intellectual significance to the Chinese literati community.” – Madeline Chu, Professor of Chinese Language & Literature, Kalamazoo College

“A special value I find in this book lies in its bilingual texts of Chinese tihuashi poems, which will not only benefit scholars and students of classical Chinese poetry but also exemplify Professor Pan’s insights on classical Chinese poetic language and the art of translating this language into contemporary English.” – John S. Rohsenow, Professor Emeritus, The University of Illinois at Chicago

Daan Pan is professor of English at California State Polytechnic University, Pomona. He holds a PhD in comparative literature from University of Rochester. He has published in several journals such as College Literature and The Comparatist. He is also a practitioner, scholar, and educator of Chinese shufa calligraphy.

Part I: The Tradition of Tihuashi

Part II: The Poetics of Tihuashi

Chapter 6: The Poetics of Yuan, Ming, and Qing Tihuashi