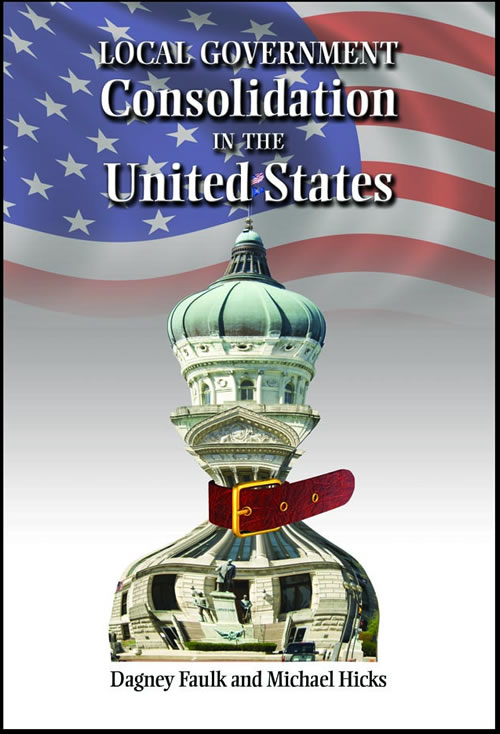 Praised by Governor Mitchell Daniels of Indiana, this book has also earned outstanding reviews, including from the Journal of Regional Analysis and Policy, which commends it because it "provides insights into the very timely topic of consolidation. It is well written and anyone seriously interested in the topic can find value in reading it."

This book will be an essential resource for political scientists and policy makers interested in American government. Written in a highly accessible manner, it will also be a valuable read for students and general readers.

“Dr. Faulk and Dr. Hicks have confirmed in scholarly data what common sense suggests … Dr. Faulk and Dr. Hicks’ work proves that the consolidation or elimination of wasteful, confusing, and unnecessary government is the key to saving tens of millions of dollars for both overburdened tax payers and hard-pressed local governments. In the years ahead, this book will be an important guide, both here in Indiana and across the nation.” – Governor Mitchell E. Daniels, Jr., Indiana

"This book provides insights into the very timely topic of consolidation. It is well written and anyone seriously interested in the topic can find value in reading it."– Journal of Regional Analysis and Policy

Dagney Faulk is Director of Research in the Center for Business and Economic Research at Ball State University. She received her PhD in economics from the Andrew Young School of Policy Studies at Georgia State University. Her research focuses on state and local tax policy and regional economic development issues and has been published in Public Finance Review, the National Tax Journal, the Review of Regional Studies, State and Local Government Review, and State Tax Notes.

Michael J. Hicks is Director of the Center for Business and Economic Research at Ball State University. He received a PhD in economics from the University of Tennessee and is a graduate of Virginia Military Institute. His research on regional economics and public finance has appeared in such journals as the Eastern Economic Journal, Economic Development Quarterly, Public Finance Review, Review of Regional Studies and Regional Economic Development. He is author The Local Economic Impact of Wal-Mart (Cambria Press, 2007) and writes a weekly syndicated economics column.

Chapter 3: The Impact of Government Consolidation