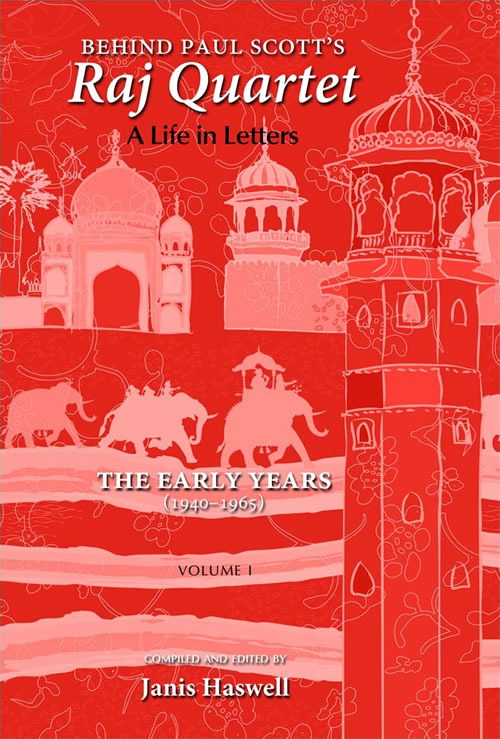 Behind Paul Scott’s Raj Quartet: A Life in Letters: Volume I: The Early Years: 1940–1965 by Janis Haswell

Praised by the Times Literary Supplement for being “an important addition to the growing body of scholarship about a writer who lived for his art,” this two-volume collection makes available to the reading public for the first time several hundred of Paul Scott's letters, illuminating his view of the themes and structure of his novels among other important insights.

*This is a two-volume work. See Volume 2.

If novelist Paul Mark Scott (1920–1978) has secured a niche in English literature, it is on the merits of his Raj Quartet and its sequel, Staying On, for which he won the Booker Prize in 1977. Yet by the time he had published The Jewel in the Crown in 1966, he had supported his family on his writing for six years, worked as a literary advisor for several publishers, routinely written book reviews for The Times, the Guardian, the Daily Telegraph, and Country Life, and published eight novels. Scott’s literary reputation was already considerable when, at the age of 44, he embarked on The Raj Quartet that would take up the last fourteen years of his life—a masterpiece that reinterpreted the major events of his generation and challenged his contemporaries to face the legacy of their past.

Despite post-war readers’ obdurate resolve to ignore their imperial past and allow its former empire to disappear (in Scott’s words) “into the mists of territorial fragmentation and dangerous racial memory,” his thirteen novels are finally receiving their due attention in the U.K., the U.S., and India itself. The turning point may well have been the Granada production of The Jewel in the Crown in 1983, which significantly widened readership of Scott’s novels.

Beginning in 1964, Scott negotiated with the Harry Ransom Research Center at The University of Texas–Austin for the purchase of his manuscripts. Later, when he was teaching creative writing at the University of Tulsa in 1976, he arranged to sell his letters to the archives at McFarlin Library. Many years after his death, David Higham Associates (the literary agency for which Scott worked from 1950–1960 and which acted as Scott’s own agent until his death in 1978) sold archival materials to the Harry Ransom Center, University of Texas–Austin. Only a limited amount of material from McFarlin’s Paul Scott Collection has been published to date. The David Higham Collection has not been systematically used until now. Together, the Tulsa and Austin Collections involve many thousands of Scott’s professional and personal letters, to a large degree untapped by scholars of literature.

In this two-volume collection, Janis Haswell makes available to the reading public for the first time several hundred letters from the Tulsa and Austin archives, as well as dozens of private letters to daughters Carol and Sally Scott.

Scott's letters never disappoint. They are intriguing, well-penned and (in most cases) well-preserved in carbon form by Scott himself. They explore in depth and detail available nowhere else his view of the themes and structure of his novels; his experience and views of India; his dealings with publishers, agents, critics, readers, and writer friends (the likes of Muriel Spark, Gabriel Fielding, M. M. Kaye); his role as an agent and influential reviewer of fiction; his trials in supporting himself and family as a freelancer; his experience as a teacher in the United States; and his love and loyalty to family and friends.

These letters reveal a person not accessible through the novels themselves. Here Scott is unmasked to the degree that any writer is unguarded who habitually produces texts with an audience in mind. These letters, in fact, tell his life story. They work like a sequence of mini-narratives that, viewed together, allow us to better envision the author of the Raj Quartet.

Certainly these letters will be of interest to literary scholars worldwide, especially in the U. S., England, and India, judging from published academic studies of the past 25 years, the continuous flow of theses and dissertations, and most recently, scholars in India who are embracing the Raj Quartet as part of their literary history. But there is ample interest in popular readership following the acclaimed Granada’s series The Jewel in the Crown and the film version of Staying On.

“An important addition to the growing body of scholarship about a writer who lived for his art.” – Times Literary Supplement

"The letters continually illuminate details of his work as a novelist, his self-conscious and perceptive evaluations of his and others’ work, and the experiences that shaped his fiction ... the letters offer us a valuable biographical window onto Scott’s work methods and ideas, as well as the everyday life of a postwar English writer. Those interested in Scott, and in postwar fiction more broadly, will find much to appreciate in Janis Haswell’s admirably annotated volumes." – Transnational Literature

"Janis Haswell’s two-volume collection of Scott’s letters brings new and welcome insight into the man and the artist. Haswell, a professor of English at Texas A&M Corpus Christi, has excellent introductions to each section of letters, which provide indispensable context and background. ... Haswell has done much to perpetuate scholarly interest in Scott by publishing these two volumes." — Harvard Review (Read the entire review here)

"The larger part of Haswell’s first volume deals with Paul’s post-war life as a literary agent and a working novelist: the years when I knew him best. What strikes me now is how completely professional matters, and the correspondence dealing with them, occupied almost his entire waking life: even the lunches were literary, and almost all his friends were, one way or another, in the book trade. As everyone agreed, he was a brilliant agent, who took endless pains over his clients. Many of these letters deal with critical discussion of manuscripts, his own or those of others, which for those outside the charmed circle will make tough reading. (I suspect Haswell inserted so many of them for the benefit of English professors teaching Scott’s fiction.)..." — The New Republic (Read the entire article here)

Janis Haswell is a professor of English at Texas A&M University–Corpus Christi. She holds a PhD from Washington State University, an MA from Gonzaga University, and a BA from Seattle University. Dr. Haswell’s previous publications include Paul Scott’s Philosophy of Places(s): The Fiction of Relationality, Introduction to the Raj Quartet (co-authored with Janet Popham), Pressed Against Divinity: W. B. Yeats’s Feminine Masks, and Authoring: An Essay for the English Profession on Potentiality and Singularity (co-authored with Richard H. Haswell). She also has published in journals such as Yeats Annual, College Composition and Communication, The South Carolina Review, The Journal of Teaching Writing, Antigonish Review, Studies in the Novel, and Transformations.

Frequent Abbreviations in the Letters

Introduction to Volume I