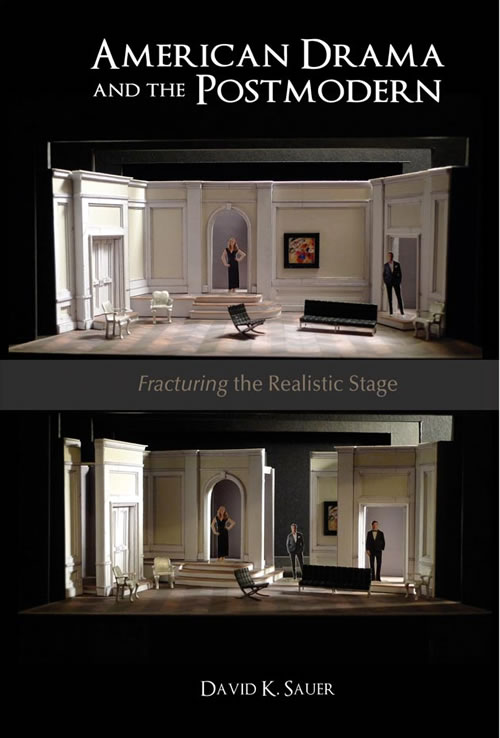 American Drama and the Postmodern: Fragmenting the Realistic Stage by David K. Sauer

This study seeks to reunite American drama with more of the mainstream of American literature using contemporary literary theories of feminism, Derrida, Lacan, as well as the nature of language. It also focuses on the theatrical ways that plays work through performance and staging.

Mainstream American drama is often relegated to obscurity because it is seen as essentially the same as old-fashioned realistic playwriting. This study seeks to redress this misconception by demonstrating how the seeming realism of contemporary Pulitzer Prize–winning dramatists from 1979 to 1999 is actually postmodern, combining old styles in new ways.

Modern Drama and the Rhetoric of Theater by William Worthen is representative of the view that contemporary dramatists are still working in only slightly modified realism: “The bizarre and unexpected turn of plot, unusual mises-en-scene, or oblique and refractory language […] often seem to signal an effort to reshape the project of realistic theatricality. In many respects, though, this drama capitulates to the categories of meaning and interpretation found in earlier realistic modes” (82–83).

Disagreeing with Worthen on this key point, the argument put forth in this book is that contemporary dramatists have been inventing a new postmodern form, indicated by a shift in sets which are now nearly always fragmentary, signaling to the audience that there are gaps in the narrative. As a result, the plays are actually postmodern, and the audience must fill in gaps. The realistic surface induces them to think they are objective viewers, and this position of detachment is slowly undermined to reveal that the audience itself is implicated in the issues it wishes to view from the outside.

To demonstrate the differences and unique postmodern vision of contemporary plays, each chapter pairs one with a similar play from the earlier period of modernism and realism, 1920–1940. This opens the possibility of rethinking both the older, classic American works as well as the more contemporary from a variety of postmodern perspectives. As a result, poststructural critical understandings, which have been used for most literature for the past forty years, can now be applied to the drama as well.

Rachel Crothers, successful Broadway dramatist for four decades, who directed her own works at times, is paired in A Man’s World and He and She (1920) with Wendy Wasserstein’s Uncommon Women (1977) and Heidi Chronicles (1988). Philip Barry’s Holiday (1928), precursor of his more famous Philadelphia Story, is compared with Guare’s Six Degrees of Separation (1990) as plays of outsiders who come into the world of the New York wealth. Lillian Hellman’s The Children’s Hour (1934) is contrasted to another play of sexual accusation against a teacher, Mamet’s Oleanna (1992). Two aspects of O’Neill’s dramaturgy are examined, the earlier Desire Under the Elms (1924) with Shepard’s Buried Child (1979), two plays of incest set in remote farms. The later Iceman Cometh (1938) is paralleled with August Wilson’s Joe Turner’s Come and Gone (1988); both are set in boarding/flop houses in 1912, raising issues of setting plays in the past. The concluding chapter takes on all the problems of staging the divine/invisible through the theories of magic realism, focusing on earlier attempts by Thornton Wilder as well as Barry, and experiments of the early 1990s—Angels in America, as well as Guare’s Four Baboons Adoring the Sun, Terrance McNally’s A Perfect Ganesh and Corpus Christi, and Margaret Edson’s Wit (1999).

This study seeks to reunite American drama with more of the mainstream of American literature using contemporary literary theories of feminism, Derrida, Lacan, as well as the nature of language. It also focuses on the theatrical ways that plays work through performance and staging. This reveals how contemporary playwrights see themselves not as authors, but as parts of a team of designers, actors, and directors. Stage directions are largely omitted, but knowledge of original productions––both as seen live and recorded on tapes archived at Lincoln Center––reveal aspects of fragmentation of scenery, minimalist acting, emphasis on the “unsayable”, which makes these plays far more postmodern than they might seem merely as read. More importantly, the final chapter reveals how these techniques culminate in 1990s play’ ability to extend beyond the real in a myriad of ways, all united by a new, postmodern view of the divine as interpenetrating reality.

In one sense, this seems to be juggling quite a few different items—poststructural theory, modernist realists, as well postmodern deconstructive realists and theatrical practice. All fit together neatly, however, in each chapter through a focus on performance, staging is seen as central to the dramatic experience, with reviews, photographs, and archival videotapes of productions used to verify and explore the plays’ meanings.

The plays, taken as a whole, reflect the key issues of American society from reactions to the Vietnam War, through issues of sexual preference, race, and feminism and its backlash, through issues of wealth and poverty to arrive at a new vision of a forgiving divine which accepts without judgment all the issues of diversity.

American Drama and the Postmodern is an important book for collections in American literature, drama and theatre, as well as for literary theory.

David Sauer is professor emeritus at the Jesuit College of Spring Hill where he directed plays for many years and also taught in the English department. He holds a PhD in English from Indiana University, with a minor in theatre, and a BA from the University of Notre Dame. His previous books include David Mamet: A Resource and Production Sourcebook and David Mamet’s Oleanna, and his articles have been published in Modern Drama, Shakespeare Yearbook, Shakespeare Quarterly, Shaw and American Drama. In addition, he has published in the Cambridge Companions to David Mamet and August Wilson. He is president of the David Mamet Society and the 2011 winner of the Current-Garcia Distinguished Literary Scholar Award by the Alabama College English Association..