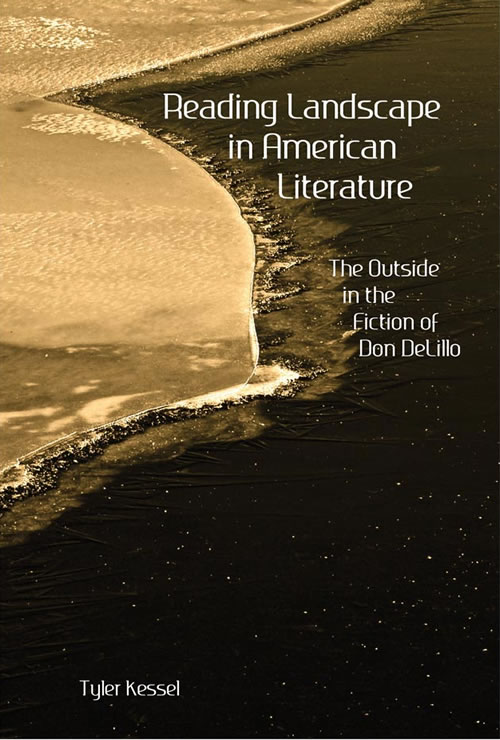 Reading Landscape in American Literature: The Outside in the Fiction of Don DeLillo by Tyler H. Kessel

This study argues for a new model of reading landscape in the twentieth- and twenty-first-century American novel. The author takes as exemplary the novels of Don DeLillo—and in particular the main focus of this study, The Body Artist—which have constructed landscapes that exceed the limits of geography, time, and perception.

Over the past forty years, from Americana to Point Omega, Don DeLillo has written some of America’s most important novels. Although DeLillo scholarship has dealt extensively with critical theory, through themes such as systems, technology, consumerism, and terrorism, none has addressed the relation between his texts and the concept of the outside.

This study argues for a new model of reading landscape in the twentieth- and twenty-first-century American novel. The author takes as exemplary the novels of Don DeLillo—and in particular the main focus of this study, The Body Artist—which have constructed landscapes that exceed the limits of geography, time, and perception. In relation to a series of literary and philosophical texts, the author reads the force driving this exceedance as the Outside, and he seeks to reconceptualize “landscape of estrangement” primarily as a relation to the Outside that animates and confuses the difference between inside and outside. Thus, the project takes as a general guide the following question: What does it mean to read the emergence of a landscape that is of the Outside?

The answer to this question will help contextualize this study, bringing into relief a set of texts not through the categories of “modern,” “postmodern,” or “romantic,” but rather their relation to the Outside. Thinking of the book as an “assemblage with the outside” also means––within the particular context of this study––that the author’s concept “landscape of estrangement” is not necessarily restricted to the site of literature and can emerge via visual or auditory landscapes.

To extend this thought even further, a notion this study suggests, but one that would require a whole other project, is that America itself can be read as a landscape of estrangement. If one were inclined to read novels as representations of America, then one could argue that the landscapes found in those novels would be representations of America’s landscapes of estrangement. For example, the landscapes found in DeLillo’s novel Cosmopolis may refer simultaneously to New York City and America at large.

This, however, is not what the author of this book has in mind. This study argues that to think of America as a landscape of estrangement would mean taking the novels produced within America as elements—not representations—of that landscape, and as such they would be available among other aspects, such as film, music, politics, photography, and architecture. Sites through which DeLillo’s novels have been consistently read—the city, garbage, technology, film, terrorism—all contribute to the emergence of a landscape of estrangement within America. Perhaps literature and film—or what the author will call “fabulation”—provide the most profitable sites for reading this emergence given their potential for narrative, which as we shall see is particularly suffused with such landscapes.

Taking its general philosophical, strategic, and methodological inspiration from the works of Jacques Derrida, Gilles Deleuze, Michel Foucault, and Maurice Blanchot, this study is an intervention into the growing field of DeLillo studies which reads landscapes that problematize the limits of geography, time, and perception. After developing the concept of landscape of estrangement in contrast to more traditional understandings of literary landscapes, the volume examines its production via the outsider, hospitality, mourning, and the uncanny—sites whose force comes from the outside.

This book will be a welcome addition to collections in American literature, critical theory, and philosophy.

Tyler H. Kessel is an assistant professor of English at Hudson Valley Community College in Troy, New York, where he teaches courses in composition and American literature. He holds a PhD in English from SUNY Albany and an MA in English from SUNY Binghamton. His work has appeared in Critique: Studies in Contemporary Fiction, The Explicator, Reconstruction: Studies in Contemporary Culture, and Writers Online.