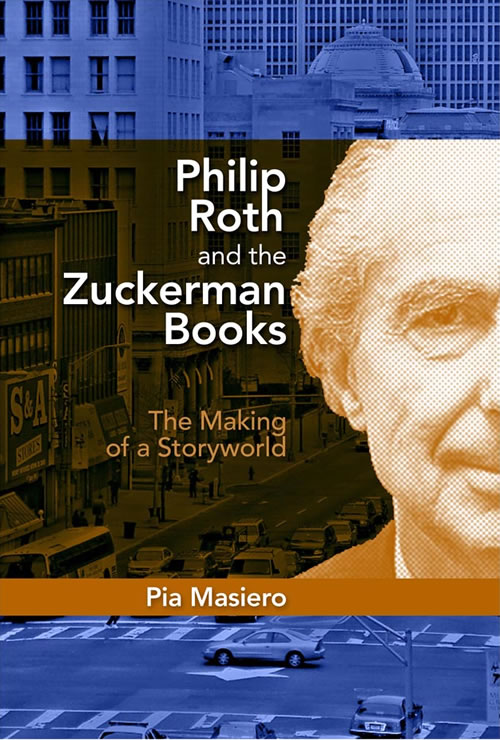 Philip Roth and the Zuckerman Books: The Making of a Storyworld by Pia Masiero

“A well-researched and sophisticated study with an extensive bibliography… Particularly impressive is the international range of the scholarship, referring, in addition to criticism in English, to works in Italian, Spanish, and French, for which she provides her own translations … Pia Masiero’s study is impressive in its scholarship … This is a groundbreaking study of the Zuckerman books and an excellent addition to Roth studies.” – Philip Roth Studies

Philip Roth’s standing on the literary scene is undisputed. The recipient of innumerable literary awards, the Jewish American author has reached past the precincts of his Newark’s Weequahic neighborhood to become one of the most significant American novelists of the late twentieth century, an unrivalled master of the art of fiction. His literary output spanning more than 50 years and more than thirty books has been astounding both in terms of quantity and quality.

Roth’s place among the classics has been established by a host of critical studies presenting Roth’s work from a myriad of thematic perspectives. Critical literature on Roth has become a minor industry of sorts and the interested reader may find a number of excellent general book-length treatments of his oeuvre.

Starting with the front matter in The Human Stain (2000), Roth has rearranged the list of his previously published works, grouping them according to the narrating voice. The list of the “Zuckerman Books” is the most conspicuous in this rearrangement, and the only one that has been signaled by Roth as complete since the publication of Exit Ghost (2007) that has marked the demise of Nathan Zuckerman explicitly.

The time appears ripe to narrow the scope of inquiry and engage critically with Roth’s own rethinking of his work, starting from the character who has been recognized unanimously as the author’s most beloved protagonist and his most recognizable alter-ego figure. This book provides a sustained analysis of the nine “Zuckerman Books” plus My Life as a Man (1974) and The Facts (1988) featuring Roth’s most famous protagonist in ways crucial to assess his literary function across multiple narratives.

This book traces Zuckerman’s fictional birth in My Life as a Man and The Ghost Writer, his growth through Zuckerman Unbound, The Anatomy Lesson, The Prague Orgy, The Counterlife, The Facts, his development in American Pastoral, I Married a Communist, The Human Stain and his death in Exit Ghost, to explore how Roth has been progressively creating and refining this mask and his voice as a means to come to terms with his own biography, his history, and his own self as a writer. All the defining features of Roth’s poetics—masking practices, ventriloquism, meta-fictional focus, cultural significance—are visible in the creation of Zuckerman as narrator. This study keeps up the ongoing reflection in Roth’s scholarly literature on the foundational relationship between facts and fictions demonstrating how Zuckerman amplifies and perfects the typically Rothian tendency to draw materials for his fictional writing from his own life and reveals Roth’s ambition to create a monument out of a specific and well individualized identity: the writer steeped in American history. As Roth’s most cherished mask, Nathan Zuckerman opens for the reader interested in the Jewish American author a perfect window on the crucial issue of authorship and on the range of Roth’s thematic preoccupations.

In proposing to view The Ghost Writer as a narrative beginning, The Counterlife as a middle and Exit Ghost as an end, the book addresses the stakes at play in reading across multiple narratives directly: how is Zuckerman’s identity shaped? How does narrative technique interact with biographical data? How do readers make (progressive) sense of Zuckerman and how do they cope with inconsistencies? What kind of coherence can be ascribed to Zuckerman in spite of the gaps his long narrative presents? What if anything is specifically “Jewish” about the creation of Zuckerman as narrator of numerous books? What are the literary functions, the formal and narratological underpinnings and the psychological needs Zuckerman activates and reveals?

The book's groundbreaking contribution consists in a unique focus on the inner, that is to say, narratological logic of the fictional world presided over by Nathan Zuckerman and in the contextual attention to how form in its panoply of aspects triggers reader responses and activities. Masiero illuminates Roth’s art of fiction through the detailed analysis of Roth’s ambitious dream of creating a complete narrative microcosm.

This book is important for the general reader interested in contemporary American fiction, as well as for teachers of American literature and Jewish studies, for graduate students and advanced undergraduates, and, of course for Roth scholars and literary theorists.

“A well-researched and sophisticated study with an extensive bibliography… Particularly impressive is the international range of the scholarship, referring, in addition to criticism in English, to works in Italian, Spanish, and French, for which she provides her own translations … Pia Masiero’s study is impressive in its scholarship … This is a groundbreaking study of the Zuckerman books and an excellent addition to Roth studies.” – Philip Roth Studies

"Demonstrating both what a narratological approach can bring to Roth’s texts and what Roth’s work can offer to narratology, Masiero’s meticulous unpicking of the different narrative layers of the novels, and unpacking of the ambiguities of particular episodes in the novels (invariably well-chosen), produce a compelling and persuasive account both of Zuckerman’s development as a fictional author and of Roth’s development as a novelist. Lucidly written and thoroughly researched, this is one of the finest books to have been written on Roth and will be invaluable to scholars, students and general readers." - European Journal of American Studies

Pia Masiero is an assistant professor of American literature at the University of Venice, Ca’ Foscari. She has previously worked and published on African American literature in the twentieth century and William Faulkner's short stories. Her research and teaching focus on Hawthorne and the American Renaissance, literary theory and narratology and contemporary American fiction.