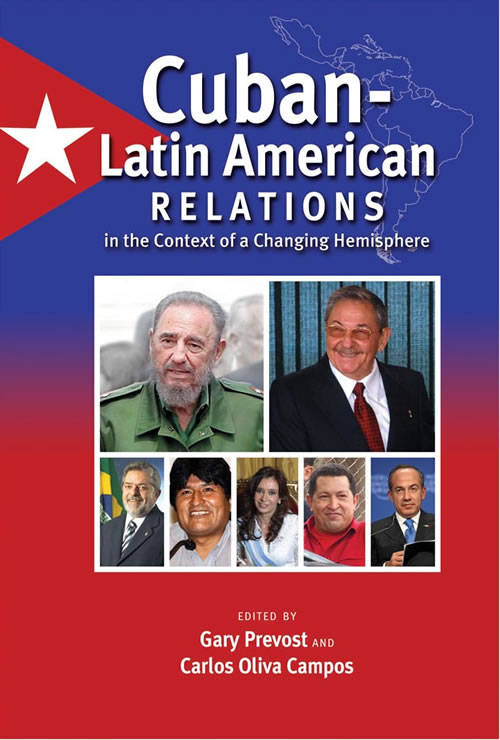 This volume seeks to fill a very significant void in the recently published scholarship in English on Cuba’s relationship with Latin America. Cuban foreign policy has received attention over the years, but the bulk of the scholarship has been on its relationship with the United States. This book demonstrates conclusively that a decade into the twenty-first century, Cuba has achieved a position in the hemisphere that is far less isolated than at any previous time since the triumph of the Cuban revolution in 1959. That reintegration into hemispheric affairs is evident in many crucial areas like politics, economics, and culture.

Following the election of Mauricio Funes to the presidency of El Salvador in 2009, relations between Cuba and Latin America came full circle. El Salvador subsequently restored diplomatic relations with Cuba and was the last country to do so, just months after the fiftieth anniversary of the Cuban revolution. In the wake of these dramatic events, it should be noted that just fifty years ago, all Latin American countries––with the exception of Mexico––severed their formal ties with the island. In 1962, with heavy pressure from the United States, Cuba’s membership in the Organization of American States (OAS) was suspended. In May 2009, at an historic OAS meeting in Honduras and against the strong wishes of the United States, the Latin American countries voted unanimously that Cuba should be returned to full membership in the organization.

This volume seeks to fill a very significant void in the recently published scholarship in English on Cuba’s relationship with Latin America. Cuban foreign policy has received attention over the years, but the bulk of the scholarship has been on its relationship with the United States. That relationship is important and will also be addressed in this book by Esteban Morales Dominguez, who for many years has been Cuba’s leading scholar of US–Cuban relations. His most recent book US–Cuban Relations––A Critical History was coauthored with Gary Prevost, a coeditor of this volume. Other important books have focused Cuba’s relationship with the superpowers from the Cold War era as well as Cuba’s role in Africa.

The contributors to this volume have demonstrate conclusively that a decade into the twenty-first century, Cuba has achieved a position in the hemisphere that is far less isolated than at any previous time since the triumph of the Cuban revolution in 1959. That reintegration into hemispheric affairs is evident in many crucial areas like politics, economics, and culture.

There is no doubt that Cuba’s position in the hemisphere has been bolstered by the leftward direction of Latin American politics. This trend has clearly permitted the development of such new organizations as ALBA and the Bank of the South, but it is not likely that even the return to more conservative governments in the region would risk putting Cuba back into its previous position of relative isolation because once political, economic, and cultural ties are fully established, they become much more difficult to reverse. While the United States might welcome the election of more conservative governments in key countries such as Brazil, Argentina, and Venezuela, it is unlikely that Washington, in a multipolar world, would be able to convince key Latin American governments to reverse their policies of full inclusion of Cuba into hemispheric affairs.

This is an important volume for all scholars of Latin American politics and for scholars of US foreign policy, especially those focused on US–Cuban relations.

"A timely publication given the enormous changes that have swept across the Latin American continent in recent years ... The authors document how Cuba has now restored full diplomatic relations with all of the Latin American countries and has been welcomed into all of the regional organisations that it seeks to enter. ... the book makes a useful contribution to the debate around the future of the Socialist system in the light of the internal reform process that was under way as the book went to press. The book was published before the recent Party Congress but it correctly predicts the course that Raúl Castro has set, emphasising the economic factors that need to be addressed if the revolution is to survive." – International Journal of Cuban Studies

Gary Prevost is a professor in the Department of Political Science at St. John’s University/College of Saint Benedict, Minnesota. His books include Politics of Latin America—The Power Game, Democracy and Socialism in Sandinista Nicaragua (coauthored with Harry E. Vanden), The 1990 Nicaraguan Elections and Their Aftermath (coedited with Vanessa Castro), The Undermining of the Sandinista Revolution (coedited with Harry E. Vanden), Cuba: A Different America (coedited with Wilber Chaffee), The Bush Doctrine and Latin America (coedited with Carlos Oliva Campos), Revolutionaries to Politicians (coedited with David Close and Kalatowie Deonandan), and United States-Cuban Relations—A Critical History (coauthored with Esteban Morales), in addition to numerous articles and book chapters on Nicaragua and Spanish politics.

Carlos Oliva Campos is a professor of history at The University of Havana. He is the author, coauthor, and editor of numerous books including The Bush Doctrine and Latin America, Panamericanism and Neo PanAmericanism: The View from Latin America (with Gary Prevost), La situación actual en Cuba: desafíos y alternativas , and Relaciones internacionales en America Central y el Caribe durante los anos 80.

Chapter 1: The Relations of Cuba with Latin America and the Caribbean: The Long and Winding Road of Reconciliation (Carlos Oliva Campos)

Chapter 2: Latin America and Cuba in the Perspective of the U.S. Think Tanks: 2000-2010 (Luis Fernando Ayerbe)