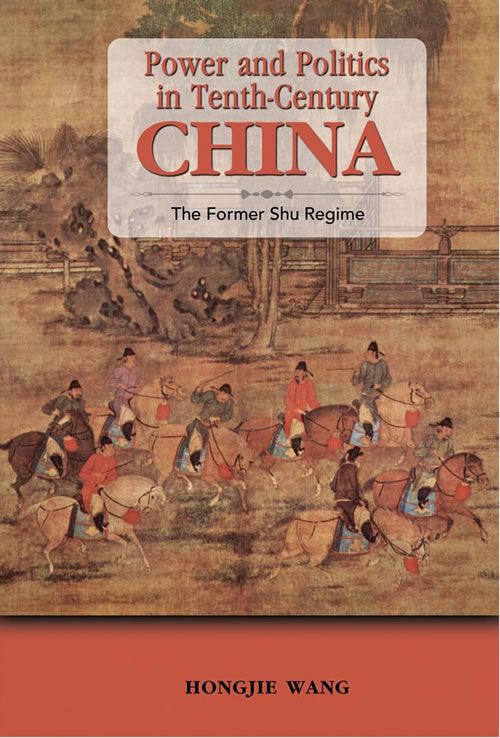 Power and Politics in Tenth-Century China: The Former Shu Regime by Hongjie Wang

This book sheds much light on the complicated national politics and intricate interstate relations of the divided tenth-century China. It examines how Wang Jian, a military governor of Tang, rose to power from obscurity in the chaotic late ninth century and founded an empire in what is today’s Sichuan province in the early tenth century.

Political turbulence was common during the times of dynastic transition in imperial China. Multiple regional regimes frequently rose on the lands of the former unified empire, vying for political and military supremacy until a dominant power emerged and achieved reunification. The period of political fragmentation during the tenth century, known as the Five Dynasties and Ten States (907–979) was typical of such times.

From the crumbling of the Tang empire to the next reunification of China proper under the Northern Song dynasty, five short-lived dynasties succeeded one another in the Central Plains, the old political heartland in North China, while about a dozen smaller autonomous regimes occupied––though not concurrently––the rest of the country (mostly in the south).

Lasting more than a half century, the period is thought to have been one of unique political intrigue, during which founding rulers of humble origins engaged in schemes and strategies that increasingly inspire popular interest today. This book is an exploration of the complicated national politics and intricate interstate relations of the early tenth century with a focus on the Former Shu (891–925), one of the “Ten States” that significantly contributed to the formation of the unique political configuration of the day.

From the viewpoint of traditional historiography, the five northern dynasties constituted the “central” powers of the tenth century that dominated national politics and ultimately led China to the Northern Song reunification. In contrast, southern regimes were usually treated as subordinate or secondary powers, all considered neither legitimate nor capable of ever challenging the north, politically or militarily. This binary grouping and its discriminatory interpretation fundamentally shaped later historians’ perception of the national politics of Five Dynasties China. Even today, compared to the studies on the political history of the five northern dynasties, the neglect of the southern regimes is obvious in modern scholarship, especially in Western language publications. By focusing on the political history of the Former Shu regime in the south, this book seeks to provide a new understanding of the geopolitics of Five Dynasties China.

This book sheds much light on the complicated national politics and intricate interstate relations of the divided tenth-century China. It examines how Wang Jian, a military governor of Tang, rose to power from obscurity in the chaotic late ninth century and founded an empire in what is today’s Sichuan province in the early tenth century. Depending on a powerful military, the strategic location, and astute diplomatic tactics in dealing with surrounding powers, the Former Shu under Wang Jian’s rule successfully challenged the hegemonies of the most powerful regimes of the day from its base in the south. It was recognized as a political equal and treated as such by the contemporary northern powers, with whom the Former Shu shared the Mandate of Heaven both in rhetoric and in reality.

As the achievements of the Former Shu demonstrate, the widely accepted predominance of the northern dynasties over the other states during the Five Dynasties period does not reflect the political reality, at least in the first half of the tenth century, when no single power possessed the capability of destroying other rivals and dominating the entire country. The constructive relationships between the Former Shu and other regimes discussed in this study define a unique political configuration of tenth-century China that was characterized by power balance and pragmatic coexistence among the “dynasties” and “states,” which in most cases sensibly chose to “share” the Mandate and maneuvered to survive by interacting strategically with other powers and thus should be equally treated as “regional regimes.” This study thus provides a reevaluation of the biased Song interpretation of the Five Dynasties and rethinks national politics, the reality of interstate relations, and the mentality of the contemporary people in perceiving the upheavals and changes of tenth-century China.

This book is an important study for scholars and students of medieval China and regional studies. It will also appeal to the general reader interested in political and military history.

"A solid entry in the field of Five Dynasties and Ten Kingdoms studies ... an admirably straightforward and unadorned narrative of Wang Jian’s rise and the creation of the Former Shu state ... this book is a good place to start thinking about the rest of China during the Five Dynasties period." - Journal of Asian Studies

Hongjie Wang is an assistant professor of history at Armstrong Atlantic State University in Savannah, Georgia. He holds a PhD and an MA in East Asian history from Brown University, as well as an MA and a BA from Renmin University of China. Dr. Wang's research and teaching focus on political history of medieval China, East Asian historiography, and Chinese food culture.