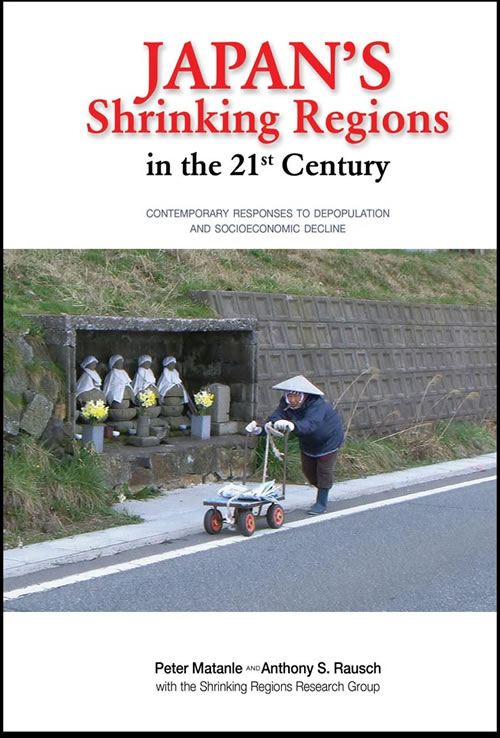 The ratio of dependants to active workers in Japan is expected to approach 1:1 by around 2030. This timely work is the first comprehensive study of contemporary regional shrinkage under Japan’s national depopulation. It brings together detailed research from across the whole Japanese archipelago, from macro to micro levels.

Japan’s population is shrinking. On current trends it will decline by an average of half a million people per year for the next forty years. The country is also getting older and the ratio of dependants to active workers is expected to approach 1:1 by around 2030. These two interdependent processes will deliver great changes to Japan in the coming decades.

In the twenty-first century, a historic turnaround in global demographic trends will occur. Europe and East Asia are especially vulnerable to demographic shrinkage. Germany is already shrinking, as is Russia. South Korea will begin to shrink soon and, importantly, so will China from around 2035. Overall, this is good news, but it brings with it worldwide changes to ways of living and working.

Japan’s rural areas have been shrinking for decades. Entire villages have vanished, even been “sold.” Thousands of municipalities have been judged “non-viable” and merged. Thousands more private and public enterprises have collapsed leaving colossal debts, while hundreds of thousands of older people live miserable lives in neighbourless communities. Rural shrinkage has been the unseen corollary of Japan’s extraordinarily dynamic 20th-century urban expansion; indeed, Japan’s postwar economic miracle has been achieved at the expense of rural retreat.

Potentially disastrous is the negative-sum game that national depopulation triggers, as one community’s gain becomes another’s loss. Japan’s Shrinking Regions in the 21st Century reveals how communities are responding positively to these emerging circumstances, delivering a message of hope and vitality to shrinking regions worldwide. Setting Japan alongside Europe, and with an epilogue describing the Tohoku earthquake, tsunami and nuclear meltdown of 11 March 2011, the book offers policy makers and practitioners up-to-date advice for community revival born of extensive collaborative fieldwork across the whole Japanese archipelago.

Japan’s Shrinking Regions in the 21st Century brings together the work of 18 international scholars to present the first comprehensive study of regional shrinkage under Japan’s national depopulation. Interspersed throughout with numerous illustrations, the book reveals a richly textured examination of shrinkage at the local level, from which emerges the overall story of Japan’s depopulation and its place within the trajectory of world development.

This will be an important source for all social science collections, as well as for researchers, policy makers, students, and practitioners with interests in regional development, demography, East Asia, and post-industrial change.

"A timely, empirically grounded resource that raises new questions and reveals engaging paths for future research. It will be of use to Japan specialists while still capable of speaking to planners and practitioners grappling with the three Ds of late capitalist economies: depopulation, deindustrialization, and disaster (both natural and man-made) ... Japan’s Shrinking Regions in the 21st Century makes ample use of the contributions provided by a team of 18 individual researchers while resisting certain pitfalls that plague so many edited books churned out by academic presses today ... it harnesses the talents of a range of researchers as well but uses field studies from numerous communities to make Japan’s regions part of a global conversation about depopulation. ... It is well positioned to bridge extant studies and share insights from Japan with a growing audience concerned about global post-industrial transformation and the role of regional communities in this ongoing process." – Social Science Japan Journal

"A splendid collective effort, one that examines the problem at various scales – the national, prefectural, regional and local – with concrete examples from many parts of Japan. ... This book admirably fulfils the objective set by the authors." - Regional Studies

"An ambitious project. I should also note that it is largely successful in achieving its ambitions. My first impression was that it was extremely expensive. After reading it; I have decided that this book is something of a bargain. In my professional career, I have read a large number of academic books, only a few of which were as worthwhile, even per dollar, as this one ... this is a very important book ... it is very substantial and a 'must read' not only for people specializing in rural Japan." - Asian Anthropologist

“Shrinkage and decline. For half a century, these have been forbidden words in the study of Japan. Yet for hundreds of towns encompassing the vast majority of Japan’s land area, these now define their reality, one which is starting to impact even large cities. The effects on Japan’s economy, environment, and culture, are already far-reaching and will only grow more serious in the coming decades. This book marks a true paradigm shift. Meticulous local studies, set against the megatrend of demographic decline in other countries, place Japan’s towns and villages in a world context. Can we slow the decay or even collapse of shrinking communities? Are there ways to work with this trend to improve quality of life in the nation as a whole? Rich in documentary information and theoretical background, revealing, disturbing, prophetic — this is one of the most important books to be written on Japan in recent years.” – Alex Kerr, author of Lost Japan (Lonely Planet, trans. Bodhi Fishman, 1996; originally published as Utsukushii Nihon no Zanzo, Last Glimpse of Beautiful Japan; Shinchosha, 1993; Winner of the 1994 Shincho Gakugei Prize for Distinguished Scholarship); and Dogs and Demons: Tales from the Dark Side of Japan (Hill and Wang, 2001)

“Japan’s Shrinking Regions in the 21st Century is an ambitious and tremendously important contribution to the study of contemporary Japanese society. Matanle, Rausch, and the contributors to this volume should be lauded for presenting the most detailed study of population decline in Japan produced to date and in the process of exploring that decline creating a superb study of contemporary Japanese society. Examining the significant impact of depopulation on rural parts of Japan—the ‘regions’—the authors of this volume paint a picture of complex social and historical factors leading to the current population crisis. Somewhat reminiscent of Beardsley’s book, Village Japan, researched by a team of scholars in the 1950’s, the team research approach evident in Japan’s Shrinking Regions generates rich quantitative and qualitative data related to population decline and produces a comprehensive window on the demographics of contemporary Japan not limited to a specific locality, but more broadly constructed to encompass the entire country. In addition, the authors contextualize their data by showing how Europe, in particular, has experienced similar problems with rural populations and society and also explore government policies and the actions people living in rural parts of Japan are taking to respond to the effects of depopulation. This is, quite simply, one of the best books on contemporary Japan produced in the past 30 years and represents a must-read for scholars of Japan, demographers, and anyone interested in processes of population change that will affect many parts of the world in the future. – Prof. John W. Traphagan, University of Texas at Austin; author of Taming Oblivion: Aging Bodies and the Fear of Senility in Japan and The Practice of Concern: Ritual, Well-Being, and Aging in Rural Japan ; and coeditor of Demographic Change and the Family in Japan's Aging Society

”An appreciation of ‘the region’ is indispensable for understanding the changes occurring in contemporary Japanese society. Nowadays, Japan is a multiplicity of heterogeneous regions, with distinctive economies, cultures, histories, and communities; all of these are, in their own ways, having to confront the difficulty of shrinkage, caused mainly by the most rapid population ageing of any country in the world. If Japan will be revitalized from the tragedy of the earthquake and the tsunami disaster of 11 March 2011, it will no doubt be because of the emerging new power of the country’s regions. This excellent book identifies plentiful cases studies and evidence for a new regional dynamism in Japan, and which provide hints for all countries and regions attempting to overcome problems associated with ageing and depopulation and to realize stability and sustainability for their societies.” – Prof. Yuji Genda, Institute of Social Science, University of Tokyo; and author of A Nagging Sense of Job Insecurity: The New Reality Facing Japanese Youth, Kibogaku , and Kibo no Tsukurikata

“Japan shrinks. Since 2005 population decline is a reality and an increasingly disquieting concern for society, business and the State. However, Japan’s regions are being affected by shrinkage very unevenly. Bringing together empirical and theoretical studies, this timely volume offers an in-depth view of demographic shrinkage in those regions where it is most rapid and pronounced. More than that: The book goes beyond identifying the impacts and problems of shrinkage for Japan’s regions to making policy recommendations for revitalisation and revealing hidden opportunities to develop a new, more environment-friendly way of life that is of potential interest for other advanced countries facing regional shrinkage.” – Prof. Florian Coulmas, Director, German Institute for Japanese Studies, Tokyo; author of Imploding Populations in Japan and Germany and Population Decline and Ageing in Japan: The Social Consequences; and coeditor of The Demographic Challenge: A Handbook About Japan

Peter Matanle is a lecturer at the University of Sheffield’s School of East Asian Studies. Dr. Matanle’s research interests focus on the economic sociology and cultural geography of work in Japan and the United Kingdom. He is the author of several publications in these fields, including Japanese Capitalism and Modernity in a Global Era: Refabricating Lifetime Employment Relations (RoutledgeCurzon, 2003), Perspectives on Work, Employment, and Society in Japan (Palgrave, 2006; co-edited with Wim Lunsing); and "Coming to a City Near You: Learning to Live Beyond Growth in Japan's Shrinking Regions" (Social Science Japan Journal, 2010). He is also the founder and general editor of the Electronic Journal of Contemporary Japanese Studies (www.japanesestudies.org.uk).

Anthony Rausch is an associate professor at Hirosaki University, Japan. He holds a PhD from Monash University. He is the author of A Year with the Local Newspaper and coauthor of The Birth of Tsugaru Shamisen Music and Tsugaru: Regional Identity on Japan’s Northern Periphery.

About the Shrinking Regions Research Group

• Philomena deLima (University of the Highlands and Islands, UK),

Part I Impacts and Implications

Chapter 2: Setting Japan in the Global Context: Shrinking Regions in the European Union

Chapter 3: The Historical Arc of Regional Shrinkage in Japan

Chapter 4: Contrasting Experiences of Growth and Decline in Regional Japan