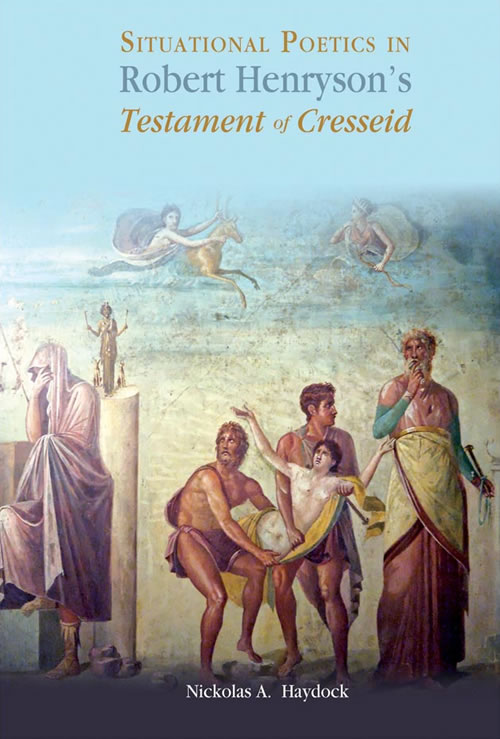 Situational Poetics in Robert Henryson’s The Testament of Cresseid by Nickolas A. Haydock

“All in all, Haydock’s book takes its position alongside the very best studies of Robert Henryson and eclipses most if not all of them. Situation Poetics in Robert Henryson’s Testament of Cresseid is a sophisticated and nuanced study of one of Scotland’s greatest poets and should prove engaging and invaluable to anyone studying the literature of late-medieval Britain.” – Enarratio

C. David Benson called Robert Henryson (who passed away c. 1505) the “last medieval poet.” He is widely deemed the most accomplished poet writing in the British Isles between the death of Chaucer and the flowering of English poetry in the early-modern period. His major works—The Moral Fables, Orpheus and Eurydice, and The Testament of Cresseid—address classical and Chaucerian traditions critically and from a recognizably Scottish perspective. The last of these poems, The Testament of Cresseid, has proven one of the most controversial and hotly contested for modern readers, provoked by its volatile mixture of censure and sympathy.

Henryson’s Testament (written in Middle Scots) is not only the finest single work by a “Chaucerian” but it also represents the first tragedy originally written in English based on invented rather than inherited materials. His alternate ending to the Troilus and Criseyde was subsequently included directly after Chaucer’s classical romance in all editions of the English poet from 1532 until the early eighteenth century. This situation influenced how Chaucer’s most celebrated poem would be understood throughout the early-modern period. Indeed, the conjuncture of the Troilus and the Testament in black letter prints of Chaucer creates a situation in which one text influences the reception of another to a degree unprecedented in English literature. Clear evidence of such influence can be seen in Shakespeare’s adaptation of Chaucer in Troilus and Cressida. But Henryson also conceived his Testament as the culmination of an authorial paradigm, forming, with The Moral Fables and Orpheus and Eurydice, a threefold poetic corpus based on the canonical model of the Virgilian poetic career.

Borrowing a term from Mary Louise Pratt, this book traces the itineraries of The Testament of Cresseidas an “intercultural text” through a number of poetic, nationalist, and imperialist conjunctures. Pratt calls this phenomenon “transculturation,” a term that can be utilized to characterize the way the Testament crosses and reaffirms cultural borders. Henryson’s intercultural response to the Troilus and Criseyde reflects the ambivalence of real and internalized borderlands to a remarkable degree. Homi Bhabha has likewise attempted to account for the space of “partial culture,” that is, “the contaminated yet connective tissue between cultures—at once the impossibility of culture’s containedness and the boundary between.” For Bhabha, “the translation of cultures, whether assimilative or agonistic, is a complex act that generates borderline affects and identifications, ‘peculiar types of culture-sympathy and culture-clash,’” which he calls an “unhomely space and time.” The unheimlich character of Henryson’s supplement is an important focus of Situational Poetics but so too are the multiple articulations of the kind of work that, as Bhabha suggests, “gives narrative form to minority positions; the outside of the inside, the part in the whole.” The approach of this book is rooted in contemporary thought about place and situatedness as well as the dislocations and “double consciousness” of what Deleuze and Guattari call a “minor literature” bordering a major one.

The past three decades have seen an explosion of work on the Chaucerian tradition, though recent work on the period between Chaucer and the English Renaissance has tended to compartmentalize the study of English and Scottish Chaucerians in rather exclusive terms —misleadingly, as is demonstrated in this book. Seth Lerer’s influential Chaucer and His Readers does not even mention the Scottish makers Henryson or Douglas, and much later work has followed suit. This book opposes that trend and argues for the centrality of Henryson’s supplement to Chaucer in accounts of English literary history. Work on the Middle Scots poets and on Henryson in particular has also contributed to this separation, turning from the approach implied in the old term, “Scottish Chaucerians,” toward nation-based studies. Yet however welcome and overdue such studies, they have tended to obscure what Denton Fox has called the “coherence” of Henryson’s work, its place in a tradition of classicism in medieval British literature which began with Chaucer.

This is the first full-length study of Henryson to appear in nearly a generation. The afterlife of the Testament from early-modern prints and Sir Francis Kinaston’s Latin translation down through Seamus Heaney’s modern rendering and a contemporary mural illustrating the poem in Dunfermline, Scotland are surveyed. The Scottish poet’s place in the classical tradition receives an extensive revaluation. His ideas of authorship and his understanding of the tragic genre receive substantial treatment, challenging received notions in significant and provocative ways. Henryson composes a distinctive bricolage in reconstructing tragic poetics from a wealth of sources, including Boethius and Isidore, Boccaccio and Lydgate, and Averroës’ Middle Commentary on Aristotle’s Poetics. The inquisitional style in Henryson’s punishment of Chaucer’s wayward heroine is also discussed within the context of what R. I. Moore has called the “persecuting society” of the late middle ages and Rene Girard’s theory of the scapegoat—a discussion that relates Cresseid’s tragedy to the ritual sacrifice of women depicted in medieval Troy histories such as Guido delle Colonne’s Historia destructionis Troiae. The association between Chaucer’s work and Henryson’s alternate ending is great analyzed in detail, employing the Lacanian concepts of lack and anamorphosis. While the final chapter details how this anamorphic supplement is deployed by Shakespeare in his exploration of “bifold authority.”

This book will be important for collections on Scotland, late medieval literature, literary history, the Chaucerian tradition, literary translation, Virgilianism and the classical tradition, Shakespeare, tragedy, medievalism, as well as feminist, psychoanalytical and anthropological approaches to literature.

“All in all, Haydock’s book takes its position alongside the very best studies of Robert Henryson and eclipses most if not all of them. Situation Poetics in Robert Henryson’s Testament of Cresseid is a sophisticated and nuanced study of one of Scotland’s greatest poets and should prove engaging and invaluable to anyone studying the literature of late-medieval Britain.” – Enarratio

"Situational Poetics is a deep, cultural history of Henryson’s problematic Testament of Cresseid. Nicholas Haydock reads the poem, its contexts and its afterlife through a rich and fascinating conjunction of cultural and literary theory, while also setting the poem carefully within its historical contexts. This book offers wonderful insights throughout, from its analysis of the hybrid “dislocations and double consciousness” of late medieval Scottish literature, Henryson’s “Virgilian” career, his admixture of tragedy and satire in the Testament, and the anamorphic temporalities that link Chaucer, Henryson and Shakespeare in their telling and re-telling of the Troilus and Criseyde story. This is an utterly compelling study of Henryson’s Testament, one that promises to re-shape completely our understanding of the poem.” ––Stephanie Trigg, Professor of English, University of Melbourne

“Nick Haydock’s book is a remarkably ambitious attempt to re-situate Henryson’s Testament of Cresseid within literary history, and to recover the author’s deliberately constructed career-profile from the many accidents of transmission. Full justice is done both to Scottish exceptionalism, and to the international world of Latin humanism; while also considered, and explained, is the surprisingly large influence this Scottish poet continued to have on later English poetry, and drama. The result can claim to be the first ever view of Henryson “in the round.” ––Tom Shippey, Professor Emeritus, St. Louis University

“Nickolas Haydock’s new book on the great Scot poet Robert Henryson manages to do several things at once that seemed to the rest of us to be incompatible. He firmly places Henryson’s work in literary history, but renders him accessible and even in dialogue with new ways of thinking about literature and culture. He is respectful of Henryson’s canonical place in Scottish identity but raises questions about how literature works in making national and ethnic identities. Haydock gives us a Henryson for the twenty-first century.” ––John M. Ganim, Professor of English, University of California, Riverside.

“Massively informed both historically and theoretically, Professor Haydock’s searching study locates Henryson’s Testament squarely and understandably in the poet’s time and in our own. Where scholarship and anthologizing have often treated Henryson in passing or missed him entirely, Haydock shows how from the consideration of “genre, gender, and generations,” from concerns with scapegoating and persecution, and from tensions of “moral pathology” and poetic invigoration Cresseid emerges as a character of complex signification and lingering intensity. From an iconography of flowers and fertility, prostitution and divinity, and suffering and retribution comes a vision of a character and a poem deeply moving and richly human.” ––E. L. Risden, Professor, St. Norbert’s College, Green Bay, Wisconsin

“Why do people read criticism of their classics? Probably to get a new picture of themselves thinking over time. An author they had formed a picture of in the distant past, in the hands of a reader other than themselves, is critically recast as the readers are recast too, both the early and the late! The book may prove a consequential re-envisioning of the entire Anglo-Scots fifteenth century, with all that entails. After this Henryson, James I, Dunbar, Douglas, and even Chaucer or Caxton will never again make the same kind of reductive—read “literary historical”—sense they have been making for at least the last century.” ––Stavros Deligiorgis, Professor Emeritus, University of Iowa

“The appearance of Haydock’s study is serendipitous, coming as it does on the heels of a new translation of Henryson by Seamus Heaney and a new edition of the complete works by David J. Parkinson. Haydock offers a thorough reading of the Testament, its sources, and its several contexts— literary, political, and social. His study makes a case for a (re)consideration of the poet and his works on their own terms, successfully arguing for the importance of the Testament as the final chapter in one version of the Troy story and the prefatory text for the next.” ––Kevin J. Harty, Professor & Chair, Department of English, La Salle University, Philadelphia

“Robert Henryson deserves his exalted place in the ranks of the greatest Scottish writers, yet Professor Haydock’s book also situates Henryson in relation to English and Classical greats, worthy to be measured alongside Geoffrey Chaucer, Aesop, Boethius, and even Virgil. All in all, Haydock’s book takes its position alongside the very best studies of Robert Henryson and eclipses most if not all of them. Situational Poetics is a sophisticated and nuanced study of one of Scotland’s greatest poets and should prove engaging and invaluable to anyone studying the literature of late-medieval Britain.” ––Stefan Thomas Hall, Associate Professor of English and Humanistic Studies, University of Wisconsin-Green Bay.

Nickolas Haydock is professor of English at the University of Puerto Rico, Mayagüez. He holds a PhD from the University of Iowa. His previous publications include Movie Medievalism: The Imaginary Middle Ages and Hollywood in the Holy Land (coedited with E. L. Risden), as well as articles on Henryson, Dunbar, Chaucer, Caxton, medievalism, classicism, and orientalism.

Chapter 1: “Lyke to ane poeit of the auld fassoun”: The Scottish Virgil

From Text to Work

The Death of Henryson

The Clamor of Tragedies

Comune Strumpettis of the Theatre

Moral Tragedy and The Maculate Muse

What Henryson Really Did to Shakespeare’s Chaucer: Romance Epic Theater