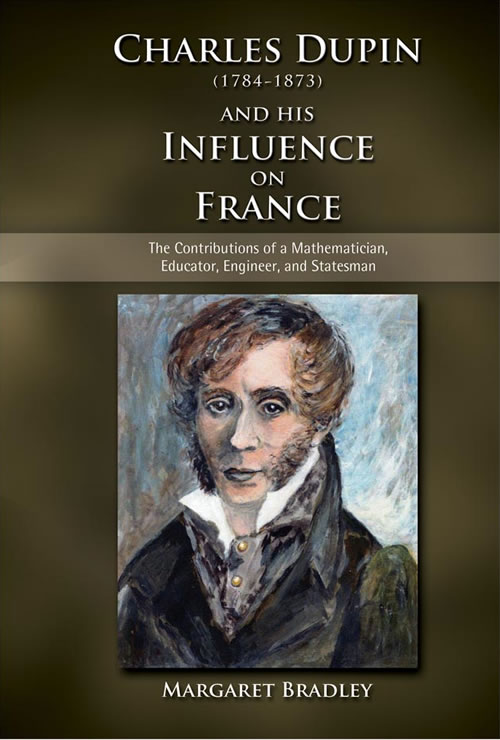 Charles Dupin (1784–1873) and His Influence on France: The Contributions of a Mathematician, Educator, Engineer, and Statesman by Margaret Bradley

This is the first published study of Charles Dupin and his entire life’s work. It illuminates his work and contribution in so many spheres, as well as his contacts with other scientists and educators. It showcases Dupin’s important contributions during a period of tremendous changes in France.

Charles Dupin was a multifaceted figure in the history of France, where his life spanned several regimes. He produced an enormous number of publications in mathematics, engineering, economics, and education. Long neglected by historians, he is at last beginning to receive attention. In his youth, he championed many causes, including the education of women, perhaps because of the influence of his dynamic and learned mother. He was already very ambitious as a youth and left behind the usual youthful desires in pursuit of his goals.

Dupin began as a brilliant mathematician as a student at the Ecole polytechnique in Paris and proceeded to become a fine naval engineer, that is until visits to Britain inspired him to change his course of direction. As the French industry was undergoing expansion, Dupin saw in Britain that workers were more efficient and healthier if they were educated. He greatly admired the freedom he witnessed in Britain, and this did not endear him to the French government of the Restoration. Indeed, the high honours to which he so much aspired eluded him for a considerable time. He saw the British savings banks and regular saving by workers within industry as a system to be introduced in France and one that should be propagated.

As an economist, he considered the welfare of French workers as vital to an efficient industry. He was particularly concerned with the protection of children in work and the education of workers. In fact, he might be considered the father of workers’ education in France. This was a subject very close to his heart and, from his early years, he devoted himself to making public lectures available to all, including women.

However, Dupin’s popularity declined as the importance of a thriving economy began to take precedence over the workers’ needs, with the workers focusing mainly on having a living wage.

This is the first published study of Charles Dupin and his entire life’s work. It illuminates his work and contribution in so many spheres, as well as his contacts with other scientists and educators. His mathematics have long interested scholars in the field, and he would have been an outstanding naval engineer. He was a linguist and highly cultured; with his aesthetic sense he might well have rivaled Sané, but because of his driving ambition he was a great man manqué. Against a background of tremendous changes in France, he made important contributions in many areas, as evidenced by the bibliography in this book.

This work will be of interest to mathematicians, historians of science, sociologists, economists, engineers, and educators.

"The great merit of this first English-language biography of Charles Dupin is to draw renewed attention to the importance of this key player in the formation of nineteenth-century science ... A most valuable resource. It provides invaluable biographical context for any scholar delving more deeply into particular intellectual and ideological studies of the period..." - The British Journal for the History of Science

Prior to her retirement, Margaret Bradley taught and conducted research at various universities. She was also an interpreter at international conferences. She holds a PhD from in the history and philosophy of science from the Council for National Academic Awards, an MPhil in the history and philosophy of science from the University of Leeds, and a BA in French and Spanish from the University of Manchester, as well as a BA in Russian from the University of Leeds. Dr. Bradley’s previous publications include biographies of Gaspard de Prony and Daniel Lescallier, and many contributions to international journals such as Annals of Science, Libri, History of Education, Centaurus, and Technology and Culture. She continues to be a regular contributor at conferences and often presents invited papers.

Introduction: Dupin, a Man of Many Talents and Contradictions

Chapter 3: Dupin’s Work and Contribution in his Early Years

Chapter 9: The Second Visit to Britain

Chapter 10: Dupin’s Publications on Great Britain until 1824, Resulting from his Travels

Chapter 11: A Summary of the Rise of Charles Dupin to High Honours and the Start of a New Career

Chapter 15: The Economic Situation in France around 1827 and the Fall of Villèle