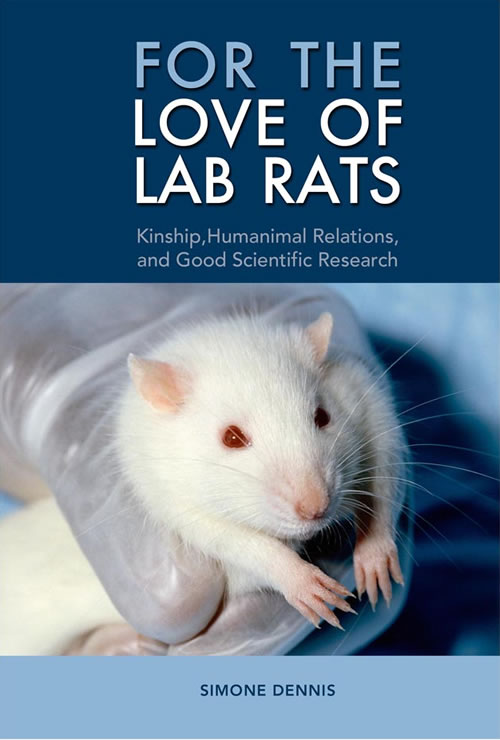 For the Love of Lab Rats: Kinship, Humanimal Relations, and Good Scientific Research by Simone Dennis

This book raises critical questions about what kinship means (or might mean) for science, for humanimal relations, and for anthropology, which has always maintained a sure grip on kinship but has not yet accounted for how it might be validly claimed to exist between humanimals in new and emerging contexts of relatedness.

Rats and mice have long occupied opposing reaches of our imaginations in the west; as like us as they are in their capacity to be social, and in that they serve as homologies for our minds and our genes in laboratory settings, they are also feared, loathed, and separated from us as destroyers of human bodies and of our material and technological worlds. Both rodent animals are expressive of polarities, ambiguities and ambivalences; they occur as pets and pests, vermin and stand-ins for humans in scientific research laboratories.

Rats and mice are no less ambiguously positioned in the modern research laboratory, where they embody directly opposing positions and meanings, and present simultaneous and conflicting meanings, to scientists themselves. Mice and rats are understood by scientists to have more than one meaning, and simultaneously represented opposed and conflicting characteristics and values, which made for a range of relationships between scientists and research rodents. These are investigated in and through different kinds of kinship. One kind is concerned with the biological relatedness of rats and mice to humans that makes animal research valid and valuable in the lab; another asks after the recognition of the simultaneous giveness of animality and humanity that results in intercommunicative exchanges between humans and animals in the lab, to the extent that some researchers felt they could speak ‘fluent rat’; and another enquires after, a kind of kinship based in the recognition of species differences, and the ways in which ‘other’ speci-al being might be understood to be equally important as human being. Each of these kinships necessitated the crossing of the boundary between humans and animals that is often assumed to be rigidly in place in the laboratory. Such crossings were regarded by scientists in this study as critical to the production of ‘good science’.

The movement of research animals across the divides that have separated scientist investigators and research animals as Baconian dominators and research equipment respectively might well give us cause to reflect about what we think we know about scientists and animals and how they relate to and with one another within the scientific coordinates of the modern research laboratory. Scientists are often assumed to inhabit the ontotheological domain that the union of science and technology has produced; to master ‘nature’ through its ontological transformation. Instrumental reason is here understood to produce a split between animal and human being, becoming inextricably intertwined with human self-preservation. But science itself is beginning to take us back to nature; science itself is located in the thick of posthuman biopolitics and is concerned with making more than claims about human being, and is seeking to arrive at understandings of being as such. It is no longer relevant to assume that instrumental reason continues to hold a death grip on science, nor that it is immune from the concerns in which it is deeply embedded. And, it is no longer possible to assume that animal human relationships in the lab continue along the fault line of the Great Divide.

This book raises critical questions about what kinship means, or might mean, for science, for humanimal relations, and for anthropology, which has always maintained a sure grip on kinship but has not yet accounted for how it might be validly claimed to exist between humanimals in new and emerging contexts of relatedness. It raises equally important questions about the position of science at the forefront of new kinships between humans and animals, and questions our assumptions about how scientific knowing is produced and reflected upon from within the thick of lab work, and what counts as ‘good science’. Much of it is concerned with the quality of humanimal relatedness and relationship.

For the Love of Lab Rats will be of great interest to scientists, laboratory workers, anthropologists, animal studies scholars, posthumanists, phenomenologists, and all those with an interest in human-animal relations.

Chapter 1: An Introduction to Polarity, Ambiguity, and Kinship

Chapter 3: Between Human and Nonhuman: Crossing the Great Divide in the Laboratory

Chapter 5: The Calculus of Care, the Laboratope, and the Relations of Mundane Kinship

Chapter 6: Ambiguity: Indistinctive Kinship in the Shadow of the Sacrificial Economy