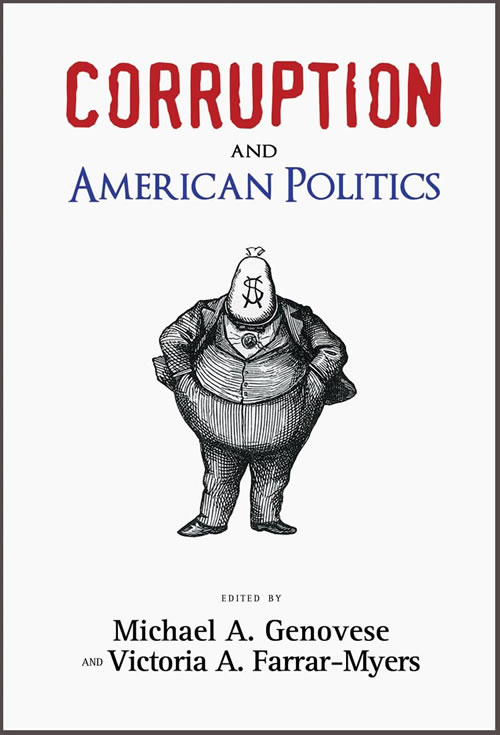 Corruption and American Politics by Michael A. Genovese and Victoria A. Farrar-Myers

From the days of Athenian democracy to the back rooms of Chicago politics today, corruption has plagued all political systems for all time. It is ubiquitous, vexing, and at times, threatens the very fabric of society. No culture, no system of government, no code of ethics has been able to eliminate political corruption.

While the United States generally ranks comparatively low in measures of political corruption (Transparency International rates the U.S. as the 18th “least” corrupt nation in the world, with Denmark at number one, New Zealand, second, and Sweden third, the U.K. 16, France 23, Spain 28, Israel 33, South Korea 40, Italy 55, Cuba 65, with Somalia last at 180), yet it too continues to confront the sting of political corruption.

For something to count as political corruption in the United States, it must have a public impact, be a part of some violation of public trust. As such, another useful distinction can be drawn between individual corruption and systemic corruption. The former is individual wrongdoing. An officeholder on the take, a legislator who sells his vote, would be examples of “bad apples.” Systemic corruption encompasses a broader sphere. Instead of bad apples, here you have a “bad system.” The undermining of democratic legitimacy or equality might be considered examples of systemic corruption, as might campaign financing practices. Such corruption runs deeper than mere individual transgression. Corruption is embedded into the day-to-day operation of the system.

In focusing on the individual, we often overlook the systemic. It is easier, and in the short run, more gratifying to catch, punish, and condemn an individual like Governor Blagojevich. Yet what of the systemic forces that led the governor to behave in such a manner? Is there undue systemic pressure to accumulate money, so much so that the system pushes politicians “over the edge”? A politician need not “sell” offices to enter into a Faustian bargain. It may be perfectly legal to collect campaign contributions, yet it may also have a corrosive or corrupting effect on the integrity of the democratic process.

With so many issues of corruption swirling around in the current American political climate, it is timely that there is new scholarship that casts much-needed light on these systemic forces. The brilliant discussions by a stellar list of distinguished scholars, led by Michael A. Genovese and Victoria A. Farrar-Myers, in the insightful edited volume, Corruption and American Politics, delivers the best and most up-to-date thinking by some of the finest political minds in the nation.

This will be an essential resource for all collections in political science and American studies.

"This volume, edited by two well-respected professors of US politics, represents the fine effort of nearly a dozen scholars to tackle this challenging subject ... Several of the essays are especially illuminating ... an important contribution to the study of political corruption in the US. Recommended." - CHOICE

Victoria A. Farrar-Myers is professor of political science at University of Texas at Arlington. She holds a PhD from SUNY Albany, an MA from the University of Illinois, Urbana-Champaign, and a BA from Russell Sage College.

Introduction: The Politics of Corruption and the Corruption of Politics (Michael A. Genovese, Loyola Marymount University)


Chapter 4: Bending the Frame to Corrupt the Lenses: An Examination of Cognitive Science and Corruption (Wayne LeCheminant, Loyola Marymount University)


Chapter 6: Corruption and Scandal in Washington: Have Lobbying and Ethics Reform made a Difference? (James A. Thurber, American University)


Chapter 7: When Justice is Not Blind: Corruption in the Courts (Christopher Shortell, Portland State University)


Chapter 10: Money for Nothing? The Politics of Reform, Actual Corruption, and the Appearance of Corruption (Victoria A. Farrar-Myers, University of Texas, Arlington)