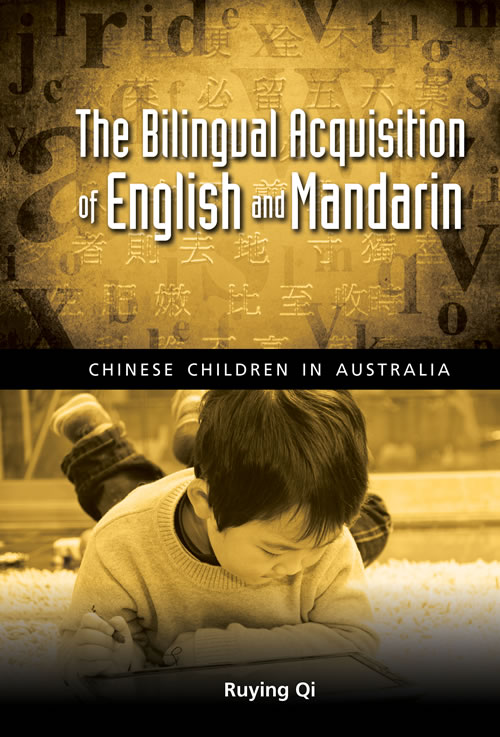 The Bilingual Acquisition of English and Mandarin: Chinese Children in Australia by Ruying Qi

“A detailed, fascinating account of Mandarin-English bilingual first language acquisition that not only provides rich and unique empirical data but also addresses a range of theoretical and methodological questions that are central to the study of language acquisition, bilingualism, and child development. It will no doubt become a key reference ...” – Professor Li Wei, University of London

This book is the first comprehensive examination of the bilingual acquisition of English and Mandarin in a child. It makes a much-needed contribution to the field of child language research, and, in particular, the research on bilingual children.

This book is the first detailed, systematic investigation of the language development of a child exposed to Mandarin and English from birth in an immigrant family in Australia. It is also the first longitudinal study of bilingual acquisition in a context-bound, one-language-one-environment situation. The vast majority of existing research studies one-parent-one-language situations.

The focus of the investigation reported in this book is on tracing the developmental route of person identification in the bilingual child in both languages from the age of 19 months to 4 years. Person identification is the precondition to socioemotional attachment and meaningful human social life, an important milestone in a child’s cognitive, interpersonal, and language development which has surprisingly long been neglected in bilingual research in spite of its importance.

Additionally, the book explores the nature of the weaker language and bilingual acquisition strategies in relation to input and learning context while the two languages are in contact and interaction and it compares these and other findings with both monolingual and bilingual data. The overall aim of this study is three-fold: first, to improve our understanding of the process of bilingual first language acquisition in its own right; second, to contribute to a better understanding of child language acquisition processes in general; and third, to help bilingual families and educators to understand early language differentiation in bilinguals and manage possible interaction in language contact while maximising bilingual experiences.

This book will be an important resource for researchers, developmental psycholinguists, language educators, and clinical professionals from related disciplines. Parents who wish to raise their children to be bilingual will also benefit from this book.

“This book is a must-read for students of bilingual first-language acquisition. In this groundbreaking work, Ruying Qi traces the development of two of the world's most important languages, Mandarin Chinese and English, in a young child of immigrant parents growing up in Australia. Dr. Qi's work is trendsetting in its focus on pragmatic and semantic aspects of the bilingual development process, which have been understudied phenomena so far. Bilingualism and child language scholars alike will appreciate the many bridges made between issues specific to the bilingual situation and theoretical issues relevant to the study of child language in general.” – Professor Annick De Houwer, University of Erfurt, and Director, European Research Network for Bilingual Studies ERBIS Germany

“Dr Qi’s detailed, fascinating account of Mandarin-English bilingual first language acquisition not only provides rich and unique empirical data but also addresses a range of theoretical and methodological questions that is central to the study of language acquisition, bilingualism, and child development. It will no doubt become a key reference for many years to come and should be read by students and researchers of linguistics, psychology, and education who are interested in the complex phenomenon of bilingualism and multilingualism that defines today’s world.” – Professor Li Wei, University of London

“In this pioneering study from Australia, Ruying Qi shows how a child can grow up fully bilingual within an immigrant speech community. Focusing on the child’s acquisition of pronouns, she shows how each language follows a distinct path of development. Informed by current theoretical perspectives on bilingual development, the book has important implications for the maintenance of Mandarin as a heritage language in overseas Chinese families and communities.” – Professor Stephen Matthews, University of Hong Kong, and Co-Director, Childhood Bilingualism Research Centre

“This is a fascinating case study of a child’s bilingual development in the time-honored tradition of earlier parent-researchers. For the first time, the development of both Mandarin and English is documented and compared in a bilingual child from age 1;7 to 4;0. The study offers new insights into the child’s use of pronouns and person identification strategies in the context of his overall early lexical and syntactic development in his two languages. It will serve as an inspiration for parents and researchers” – Professor Virginia Yip, Chinese University of Hong Kong, and Director, Childhood Bilingualism Research Centre

Dr Ruying Qi is a senior lecturer in bilingualism and Chinese in the School of Humanities and Languages at the University of Western Sydney and leader of the China Liaison Unit (Language and Culture) and a research affiliate with MARCS Auditory Laboratories.

Chapter 5: From Nominal to Pronominal Person Reference in the Early Language of a Mandarin-English Bilingual Child