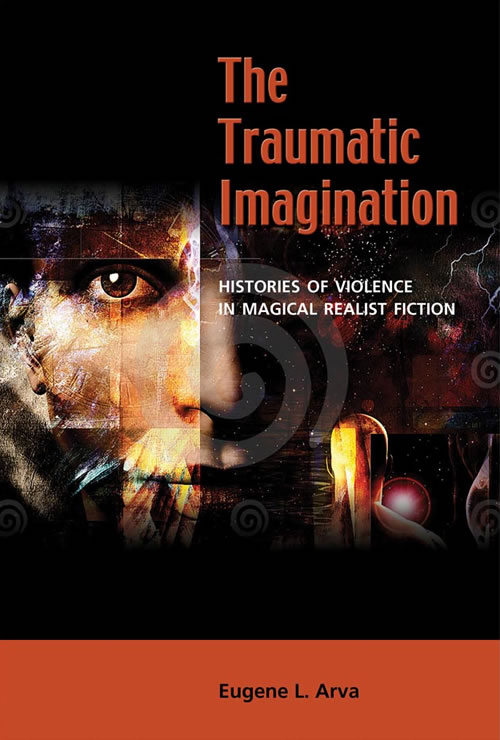 The Traumatic Imagination: Histories of Violence in Magical Realist Fiction by Eugene Arva

"Arva’s knowledge is extensive and comprehensive … Arva introduces innovative concepts of his own while remaining faithful to their original literary, cultural and critical sources.” – Transnational Literature

Magical realism, as a writing mode and not as a canonical genre limited to a certain geography, culture, or literary trend, has become one of the most effective, albeit controversial, artistic media to represent extreme events since its beginnings in the early twentieth century. The memory of an extremely violent event can neither be shaped nor kept alive outside of a narrative. Linking past and present, memory can preserve a subject’s identity only by means of narratives: one may even say that our lives are in fact the stories that we either tell or hear about. Narrative memory does not store facts of past experiences but creates meaning, an indispensable, congruous sense of what happened. Traumatic memory, on the other hand, may preclude the construction of a narrative by prompting the subject to revise the part that he or she has played in the event ad infinitum, to search for a belated and impossible adaptation. By virtue of its dissociation from consciousness, traumatic memory usually compels the psyche to revisit the violent event for as long as its control over it is unsatisfactory and until the traumatic memory can be turned into narrative memory.

Viewed in the larger context of postmodernist fiction, magical realism foregrounds and at the same time transgresses the traditional borders between reality and imagination by rearranging apparently antithetical ontological levels within the literary text: the logically and perceptually verifiable everyday reality, on the one hand, and the sensorially ungraspable and unexplainable phenomena of the supernatural. Magical realist writing is not an escape from horrific historical “facts” or as a distortion meant to make them more palatable cognitively or emotionally, but rather, as one of the most effective means of recreating, transmitting, and ultimately coping with painful traumatic memories. An author’s traumatic imagination transforms individual and collective traumatic memories into narrative memories and integrates them into an artistic chronotope. This work examines novels from Caribbean, North American, and European literatures of the second half of the twentieth century, both Anglophone and in translation, with focus on the chronotopes of slavery, colonialism, the Holocaust, and war. Historical traumata have found their reconstruction in literary works written by either traumatized or vicariously traumatized authors, such as Jean Rhys, Alejo Carpentier, Maryse Condé, Salman Rushdie, Gabriel García Márquez, Bernard Malamud, Joseph Skibell, Günter Grass, and Tim O’Brien. The traumatic imagination accounts for the relative prevalence of magical realist writing in postmodernist fiction. As a singular phenomenon of postmodern aporia, magical realist texts write the silence imposed by trauma, and convert it into history.

While a number of recent works have linked magical realism to postcolonial trauma, this book expands the trauma-theory-based analysis of magical realism. Borrowing from the Russian Formalist Mikhail Bakhtin, the study adapts his concept of chronotope to that of shock chronotope in order to describe unstable time-spaces marked by extreme events. Besides trauma theory, contemporary theories of representation formulated by Guy Debord, Jean Baudrillard, and Slavoj Žižek, among others, corroborate specific literary analyses of magical realist novels by Caribbean, North American, and European authors. The study discusses a series of concepts, such as “spectacle” and “hyperreality,” in order to create an analogy between the hyperreal, a spectacle without origins, and magical realism, a representation of events without a history, or a recreation of an absence that first needs to be acknowledged before it can be assigned any meaning. Magical realist hyperreality is meant to be a reconstruction of events that were “missed” in the first place because of their traumatic nature. While the magical realist hyperreal might not explain the unspeakable event, if only to avoid the risk of an amoral rationalization, it makes the ineffable be vicariously felt and re-experienced.

This study establishes a somewhat unorthodox nexus between magical realist writing (viewed primarily as a postmodern literary phenomenon) and trauma (understood both as an individual and as an often invisible cultural dominant), and proposes the concept of “traumatic imagination” as an analytical tool to be applied to literary texts struggling to represent the unpresentable and to reconstruct extreme events whose forgetting has proven just as unbearable as their remembering. The traumatic imagination defines the empathy-driven consciousness that enables authors and readers to act out and/or work through trauma by means of magical realist images. Corroborated by elements of trauma theory, postcolonial studies, narrative theory, and contemporary theories of representation, the work posits that the traumatic imagination is an essential part of the creative process that turns traumatic memories into narratives. Magical realism lends traumatic events an expression that traditional realism could not, seemingly because the magical realist writing mode and the traumatized subject share the same ontological ground: being part of a reality that is constantly escaping witnessing through telling. Over more than half a century now, magical realism has demonstrated its versatility by affecting literary productions belonging to various cultural spaces and representing different histories of violence. This book examines novels by traumatized and vicariously traumatized authors who make extensive use of fantastic/magical elements in order to represent slavery, postcolonialism, the Holocaust, and war.

The Traumatic Imagination: Histories of Violence in Magical Realist Fiction is an important book for magical realism– and trauma theory–based critical collections.

“The author proffers a rather long but careful theoretical context which includes presentations of previous and related work done on the fields as well as what he defines as his own interdisciplinary conceptual tool: traumatic imagination … The chapters on the chronotopes of slavery and colonialism read well and are cohesively presented when considering Arva’s core concepts … Arva’s knowledge is extensive and comprehensive … Arva introduces innovative concepts of his own while remaining faithful to their original literary, cultural and critical sources.” – Transnational Literature

"This book contributes to the growing body of critical thought on magical realism ... by integrating postcolonial and metropolitan texts, Eugene Arva’s study shows that magical realism is not only a postcolonial phenomenon but also belongs in meaningful ways to world literature in all cultural contexts, especially those having experienced trauma of one kind or another ... this approach to magical realism through ideas associated with trauma studies enlarges our understanding of the cultural work magical realism has been continuing to do in contemporary world literature." - Professor Wendy B. Faris, University of Texas at Arlington

Eugene L. Arva is an independent scholar living in Germany. Prior to this, he taught for 12 years at the University of Miami. He holds a PhD in English literature and an MFA from the University of Miami. Dr. Arva’s research focuses on postmodernism, magical realism, trauma theory, and film philosophy. His previous publications include essays on James Joyce, Caribbean magical realism, the Holocaust, the ideological spectacle of the 9/11 terrorist attacks, and filmic narratives such as Schindler’s List, The Truman Show, Natural Born Killers, and The Matrix. Dr. Arva has chaired panels and presented papers at several prestigious international conferences. He is also a creative writer, the author of two screenplays, All the President’s Children and Liquidators, which have won recognition in several US and international screenwriting competitions.

Foreword by Wendy B. Faris

Chapter 1: Living with Trauma: The Uncanny Reality of Shock Chronotopes

Chapter 4: “Who Am I and Where Is My Country and Where Do I Belong?”: Surviving Slavery

Chapter 6: “How Can We Eat and Drink When so Many Have Perished?”: Surviving the Holocaust