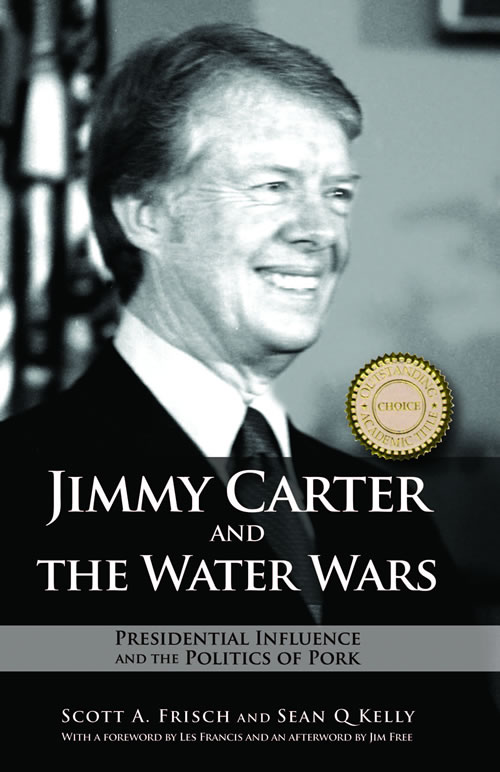 Jimmy Carter and the Water Wars: Presidential Influence and the Politics of Pork (Paperback) by Scott A. Frisch and Sean Q Kelly

This brilliant book represents a leap forward in our understanding of the dynamics of congressional-presidential relations. It provides an answer––with hard data, both qualitative and quantitative––to an age-old question: Can presidents influence votes in Congress? Using data collected from the archived papers of President Jimmy Carter, the authors identified the members of Congress that Carter targeted and what he said to them. Using roll call data, the authors also identify which of these members sided with the president and which did not. Second, the authors also address the question raised by one of Carter’s top advisors: “...[I]f the Chairman of the Appropriations Committee is talking to a member, and you’re talking with the member, guess who’s going to win…” Using data from the papers of Carter’s chief congressional rival (Tom Bevill, Chair of the Subcommittee on Energy and Water Appropriations), the authors show who the president was lobbying, who Bevill was lobbying, and who was more successful.

This landmark book also delivers a much better understanding of pork barrel politics. Pork barrel projects are expenditures included in congressional appropriations (spending) bills that are aimed at funding projects in the districts of House members (and states of Senators) that demonstrate a member’s concern for the “folks back home.” It is typically assumed that such projects help members of Congress to get reelected. Presidents—especially in recent years—have complained that these projects represent “wasteful government spending,” and they have sought to gain control over the appropriations process by limiting such expenditures. This tension between the branches, most recently evident in battles over congressional earmarks, has important implications for how Congress spends money and how budgets are determined in a democratic context: Should the popularly elected representatives control spending priorities in their districts and states, or should the executive?

Jimmy Carter and the Water Wars takes the reader into the maelstrom created by the framers of the constitution who awarded the “power of the purse” to the Congress but granted the veto power to the president. This is a critical book for all in political science and American studies.

“This book adds broadly to the dynamics of presidential leadership in Congress and makes a real contribution to the literature on presidential influence in Congress.”
–Lance T. LeLoup, Edward R. Meyer Distinguished Professor of Political Science, Washington State University

“Do you want to know how Washington really works? Read Frisch and Kelly’s Jimmy Carter and the Water Wars. They bring to life the events surrounding a critical turning point in the Carter Presidency. This is required reading for anyone interested in presidential leadership in Congress.”
–Representative Butler Derrick (D-South Carolina, retired)

“Frisch and Kelly not only tell a great story, but also systematically analyze the effect of Carter administration efforts to lobby members of Congress. The result is an important study of presidential influence in Congress.”
–John Anthony Maltese, Albert Berry Saye Professor of Political Science, University of Georgia

Scott Frisch is Professor and Chair of the Political Science program at California State University Channel Islands. A native of New Jersey Scott received his BA from Lafayette College, a Masters in Government Administration from the University of Pennsylvania, and a PhD in Political Science from the Claremont Graduate School. Scott served as a Presidential Management Intern in the Department of Treasury and as a Legislative Assistant in the Office of Senator Frank Lautenberg of New Jersey. He joined the faculty at CSUCI in 2003 after several years teaching at California State University, Bakersfield, and at East Carolina University. Scott's primary research interests are Congress, and the budgetary process. He is coauthor (with Sean Kelly) of Committee Assignment Politics in the U.S. House of Representatives; his book The Politics of Pork was published by Garland Press in 1998.

Sean Q Kelly is Professor of Political Science at California State University Channel Islands. Sean is a native of Seattle, Washington. He received his BA from Seattle University, and his PhD in Political Science from the University of Colorado. Sean is a former American Political Science Association Congressional Fellow (1993-1994), during which he worked for the Senate Democratic Leadership. He joined the political science faculty at CSUCI in 2007 after teaching at Niagara University, and before that at East Carolina University. Sean's primary research interests are American political institutions, political parties and leadership, and public policy. He is coauthor (with Scott Frisch) of Committee Assignment Politics in the U.S. House of Representatives; and authored or coauthored articles in several scholarly journals and edited volumes.

Foreword: Jimmy Carter and the Price of Political Courage

Introduction: A Shot Across the Bow

Organization of the Book


Chapter 1: The Veto and Presidential Influence

The Outsider: The 1976 Election

The Outsider: Transitioning to Power


Chapter 3: Water Projects and the Evolution of the Veto Strategy

Round One: Decision and Fallout

Round Two: The Veto Strategy

Working to Sustain the Veto

Building Coalitions in Congress: A Framework

The Override Battle from the Inside

The Tools of Influence

Presidential Influence in Congress: A Summary


Chapter 5: Presidential Influence and the Politics of Pork

The Water Projects Veto as Strategy

The Water Wars and the Politics of Pork


Afterword: The Pork Barrel and Beyond

Advice for the Next Administration and Congress

Appendix A: Full Model of Presidential Influence on the Veto Override