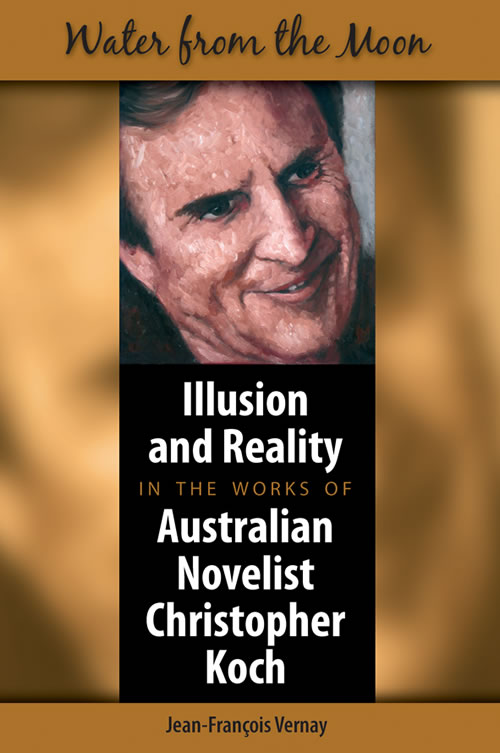 Water from the Moon: Illusion and Reality in the Works of Australian Novelist Christopher Koch by Jean-François Vernay

A valuable reference for scholars in Australian Studies, as well as those researching postcolonial, psychoanalytic and literary theories.

Author of six novels, Christopher John Koch (born in 1932) is one of Australia’s leading novelists who enjoys worldwide recognition. Koch’s writing has its finger on the pulse of today’s changing society. Not only does his work fall within a universal stream but it also stands out as a production of its own, built like a puzzle with distinct pieces. Through fiction, Koch explores other genres – the fairy tale, drama, poetry – to the point of producing multi-faceted works which challenge classification. In spite of the constant renewal of his settings for action, one notices the presence of a main thread which runs through Koch’s fiction: the antipodean and ambiguous relationship between illusion and reality.

This theoretically informed monograph provides a book-by-book analysis of the novelist’s œuvre and gives a full picture of his Weltanschauung. It is valuable reference for scholars in Australian Studies, as well as those researching postcolonial, psychoanalytic and literary theories.

This book is winner of the Excellence Award 2009 by the THESE-PAC jury (le prix THESE-PAC, Prix Jean-Pierre Piérard) in the South Pacific-Australasia category.

This book is winner of the Excellence Award 2009 by the THESE-PAC jury (le prix THESE-PAC, Prix Jean-Pierre Piérard) in the South Pacific-Australasia category.

"Jean-Francois Vernay has written an interesting study of my work, informed by a particular set of theories concerning the nature of literature. This is natural; every critic, like every creative writer, works within the framework of his own beliefs. In doing so, Dr. Vernay pursues his themes with considerable thoroughness, relating them to the broader topic of Australian literature in the 20th century in a way which should be of interest to other scholars in the field––and to anyone who is concerned with Australian writing, both at home and abroad. His book should provoke thought and discussion; and for this, I welcome it." – Christopher Koch

"...has considerable merit...serves an important purpose in that readers will almost certainly have their comprehension of, and appreciation for, each of Koch’s novels enhanced." - Australian Literary Studies, 2008, vol.23 no.4

“Water from the Moon is a book all students of Australian literature will need to engage with. Its substantial, balanced and scholarly treatment of one of Australia’s great literary figures makes it compelling reading. It fills a real gap in the current critical panorama of contemporary Australian fiction, and it fills it with competence and authority. Here at last is the insightful response that Koch’s talent deserves.” – Professor Xavier Pons, University of Toulouse-Le Mirail

Born in New Caledonia, Jean-François Vernay was educated at the Université de la Nouvelle-Calédonie and at the Université Toulouse-Le Mirail, from which he holds a PhD. As Founding Editor of Correspondances Océaniennes, a Nouméa-based postcolonial journal focussing on Oceanic cultures, Dr. Vernay has been editing articles on postcolonial societies for five years, while regularly publishing articles in refereed journals and collections.


CHAPTER I. INTRODUCTION: Writing his way to fame


CHAPTER II. THE BOYS IN THE ISLAND: ‘The things which I have seen I now can see no more’ (Wordsworth)

2.1. The Boys in the Island or the rise of a poetic novel

2.2. The Boys in the Island as a lyrical novel

2.4. The Bildungsroman: From illusion to disillusion

2.5. Francis Cullen as the archetypal antihero


CHAPTER III. ACROSS THE SEA WALL: The ‘Edenic urge’ (McAuley)

3.3. “Only connect”: the culture-clash theme

3.4. Dubious identities: The Art of Characterization


CHAPTER IV. THE YEAR OF LIVING DANGEROUSLY: ‘All the world’s a stage…’ (Shakespeare)

4.2. The Year of Living Dangerously as a palimpsest

4.4. Fictional Reality Strikes Back: Realism and the Historical Novel


CHAPTER V. THE DOUBLEMAN: “…an age of divisions” (Koch)

5.2. The Double motif: The divided self

5.4. Turning a blind eye to reality


CHAPTER VI. HIGHWAYS TO A WAR. ‘The past is not even dead’ (Faulkner)

6.3. Superstitions and the omnipotence fallacy

6.4. History and the haunting past: “The past is alive, and full of juices”


CHAPTER VII. OUT OF IRELAND: The Utopian project

7.2 Down Under or the Antipodean theme

7.4. Hell on earth: The demoniacal vision and the convict system