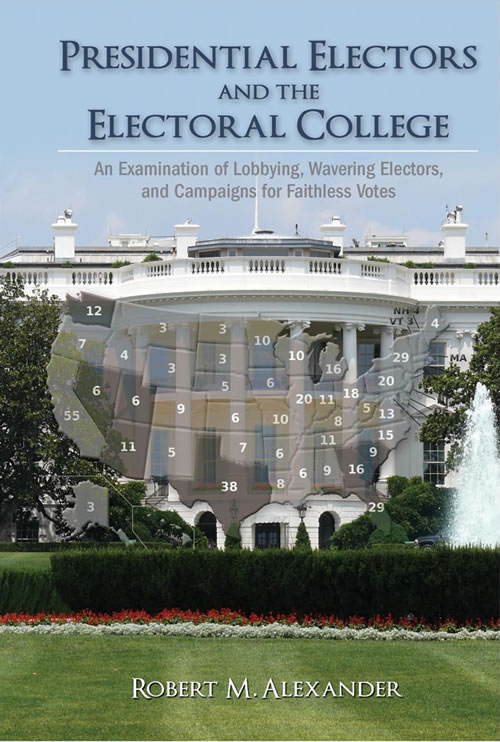 Presidential Electors and the Electoral College: An Examination of Lobbying, Wavering Electors, and Campaigns for Faithless Votes by Robert M. Alexander

"Robert Alexander convincingly argues that presidential electors––long considered by many as inconsequential, if not benign––are a serious danger to the health of our representative democracy. One of the first systematic studies of its kind, this book is indispensible for a deeper understanding of the presidential electoral process.” — Gary E. Bugh, Texas A&M University

This book is in the Politics, Institutions, and Public Policy in America book series (Series editors: Scott Frisch and Sean Kelly)

The role of presidential electors is integral to the presidential selection process, yet virtually no scholarship exists detailing this important linkage between the citizenry and America’s next president. Surprisingly, no other book has explicitly investigated these mysterious figures who translate popular votes to electoral votes. To undertake this study, the author surveyed members of the 2000, 2004, and 2008 Electoral Colleges to find out who these individuals were, how they became electors, and what they thought about the institution. The responses received were overwhelming—in their profundity and in their revelations. Over 60% of electors responded to each of the surveys conducted. This data comprises one of the most comprehensive treatments of presidential electors ever assembled. More importantly, the data reveal a significant risk to the presidential selection process—one that has not yet been systematically analyzed.

The data reveal two completely new findings regarding presidential elections that have heretofore never been systematically examined. First, in each of the past three elections, intensive elector lobbying campaigns have occurred seeking to persuade electors to vote contrary to expectations. These campaigns have taken place in the period between the general election and the time electors cast their votes in December. Second, and most important, a significant number of electors actually consider voting for candidates contrary to expectations. The data reveal that the presidential selection process is indeed threatened by a sizable number of potentially faithless or what is termed here as “wavering” electors. This finding has far reaching consequences both in the scholarly community and for the integrity of the presidential selection process. For instance, in 2004, nearly 10% of presidential electors and in 2008, over 11% of presidential electors considered voting for someone other than to whom they were pledged. As a reference point, this would be analogous to California’s entire delegation considering defecting from their party’s presidential ticket. These findings are completely novel, unexpected, and alarming. This study should stimulate great debate among scholars and laymen alike regarding the role of presidential elector.

The Electoral College is already a controversial institution. Yet, the arguments offered in this study will likely create much more concern over the way presidents are selected. The study develops a theory of elector behavior that takes into account an elector’s motivation to “make a statement against their party,” “make a statement against their party’s candidate,” or to “make a statement against electoral practices.” The theory and findings are completely original and have far reaching implications for presidential elections and the Electoral College. In short, this project is wholly original, addresses a previously neglected topic, and reveals a real-world problem that has significant consequences for American democracy.

Presidential Electors and the Electoral College is an important study for students of the presidency, political parties, interest groups, institutions, and recent U.S. history. Party professionals (including electors themselves) will also be very interested in this book. Finally, organizations interested in electoral reform (such as Fair Vote and the National Popular Vote Campaign) will also find this work to be of great interest.

Dr. Alexander was also asked by CNN to weigh in on the 2013 government shutdown.

"A solid, well-composed work of research, an important, if not definitive, study of the subject. Recommended." — CHOICE

"Robert Alexander convincingly argues that presidential electors––long considered by many as inconsequential, if not benign––are a serious danger to the health of our representative democracy. In one of the first systematic studies of its kind, Alexander presents a theory of elector behavior that explains why electors will continue to plague the system unless we institute reform. This book is indispensible for a deeper understanding of the presidential electoral process.” — Gary E. Bugh, Texas A&M University

”Rob Alexander's Presidential Electors and the Electoral College is a valuable and much-needed examination of a long neglected constitutional challenge. His analytical research is a serious contribution to our understanding of the Electoral College and its problems." – Tom Cronin, Colorado College

“Dr. Alexander has brought this very important history to life in a way that can help all of us look more carefully into the future. With lots of current public debate about the future of the Electoral College, this book provides a comprehensive and much-needed examination of one of the challenges that we have faced since the founding of our nation." – Mark Ritchie, Minnesota Secretary of State

Robert Alexander is an associate professor of political science at Ohio Northern University in Ada, Ohio. He received his PhD and MA from the University of Tennessee-Knoxville. He is the author of Rolling the Dice with State Initiatives: Interest Group Involvement in Ballot Campaigns and The Classics of Interest Group Behavior. Dr. Alexander’s work has appeared in journals such as the Journal of Politics, PS: Political Science and Politics, and the American Review of Politics. Dr. Alexander serves on the National Executive Committee for Pi Sigma Alpha and on the National Liaison Advisory Board for The Washington Center for Internships and Academic Seminars.