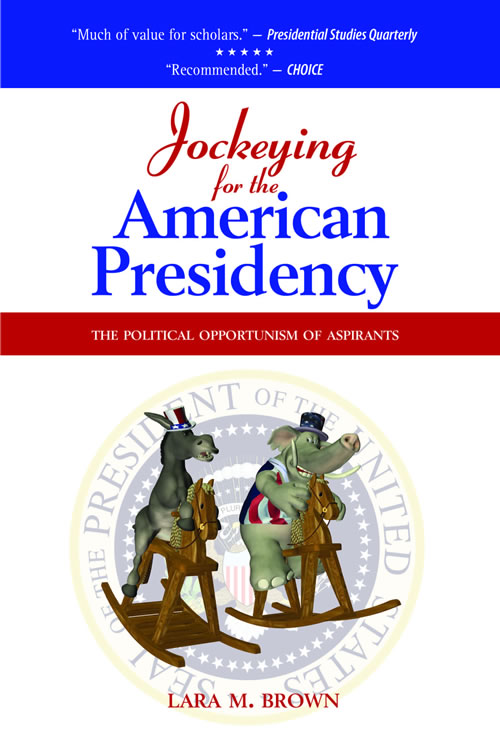 Jockeying for the American Presidency: The Political Opportunism of Aspirants (Paperback) by Lara Brown

“Lara Brown’s extensive analysis yields a variety of new and important findings … This volume contains much of value for scholars of the presidency and presidential elections." – Presidential Studies Quarterly

The quadrennial presidential election is the foremost event in American politics. Though it is, as Tocqueville notes, “a time of national crisis,” it is also the time when citizens put their faith in democracy and choose the nation’s next leader. Significantly, it is also the time when a handful of Americans jump onto the presidential racetrack and begin jockeying to win the White House.

Even though a president’s constituency is all of America, electoral success is achieved through both partisan structures and federal institutions. In short, attaining the presidency involves winning two contests: a major party nomination and a general election. Theoretically discrete, since becoming competitive in the 1790s, these contests are essentially sequential. Most observers (not to mention participants) ask two questions related to this paradox: first, how does a presidential aspirant win a major party nomination, and second, what type of aspirant makes it through this race which is more a marathon than a 100-yard dash?

Most presidency studies begin and end on Inauguration Day. The main sources of information on the presidents and their political decision-making processes prior to their ascension to the executive office are biographies and character analyses, originating mostly from the history and psychology disciplines.

A key factor to note in the study of presidents is that they are part of an elite group of aspirants––winners because all of them have successfully survived the rigors of the selection process (i.e., a party nomination contest and a general election). Thus, presidents may be more alike––as politicians––than different; but unless we place them within their campaigns and compare them with all their competing presidential aspirant counterparts, we will not know whether this is the case.

Yet despite aspirants being at the center of the presidential contests, few elections studies examine their political agency, experience, efforts, or legacies. Instead, the focus of these studies is on either the effects of political factors and exogenous conditions (e.g., partisanship and the economy) on electoral outcomes (voter behavior) or the consequences of rule changes and institutional development (e.g., caucuses versus primaries) on democratic participation (who votes). In the aim to differentiate among the presidential aspirants and explain electoral success, most researchers have limited their studies to the modern “candidate-centered” nomination period (1972–2008). Unfortunately, this lopsided emphasis has created a false impression about the politicians who have vied for the highest office in American politics––that past aspirants were less ambitious, and/or not as self-interested as today’s aspirants. This book not only corrects this misperception about presidential aspirants, but it also begins connecting presidents to their selection method in the political science literature.

In this first systematic study of presidential aspirants from the 1790s to the present, Lara M. Brown delves into the concept of political opportunism and reveals its significance in shaping the partisan and electoral competition in America. The book not only demonstrates the ways in which the constitutional design of the Electoral College structures aspirant behaviors, but it also suggests that opportunistic aspirants have driven the institutional development of the major political parties and the presidential selection method.

This pioneering study presents quantitative models and descriptive statistics, exploring the relationship between aspirant opportunism and electoral success. In compelling style, Brown provides readers with ten detailed case studies of aspirants who won the presidency; three who won their party’s presidential nomination, but lost the general election; and a complete chapter on all of the aspirants involved in the 2008 presidential campaign. Supporting these narratives are two exhaustive appendices, which offer first, electoral and popular vote data by region and candidate, and second, summaries of the people and the strategies involved in the campaigns. Overall, the book illuminates the ways in which presidential aspirants turn political conditions and exogenous events to their favor in order to promote their ambitions, or more concisely, how they learn and play at the game of presidential politics.

Jockeying for the American Presidency is an important volume for all political science and history collections focused on the presidents, parties and elections in the United States.

“Opportunism is a trait we often spot in politicians, usually ones we do not like. Lara Brown seeks to operationalize this candidate trait and assess its impact upon candidate success in presidential nominations and elections over the course of our nation’s electoral history … Her extensive analysis yields a variety of new and important findings … This volume contains much of value for scholars of the presidency and presidential elections." – Presidential Studies Quarterly

"Brown writes engagingly of James K. Polk and selective winners from different eras ... the concluding chapter deals with the 2008 election; the analysis of how the Obama forces outmaneuvered Senator Clinton's campaign is admirable ... her ambitious attempt for cohesive coverage of a vast sweep of U.S. political history is competent ... Recommended." – CHOICE

“This book will compel scholars to take a new look at the role of “political opportunism” in the presidential selection process. Brown provides a fresh, innovative exploration of the roots of opportunism, one that challenges conventional wisdom as it advances our understanding of this complex topic.” — Michael A. Genovese, Loyola Marymount University

“Dr. Lara Brown’s Jockeying for the American Presidency is one of the best books this discipline has contributed to the study of presidential nominations and elections. Her book has three especially attractive features. First, she correctly conceives of ambition as the theoretical base and she roots that ambition early in the presidential aspirants’ political careers. Second, she is very clear on the interaction between individual goals, here ambition for the Oval Office, and the development of partisan and electoral institutions. Third, as necessitated by the small number of nominations and the endogeneity among ambition, opportunity, and institution, her study is deeply historical. But history here is not just good research design—it animates the study and makes it such a pleasure to read.” — John H. Aldrich, Duke University

“Lara Brown links candidate opportunism to political experience, electoral success, partisan change, and institutional development. Admirably, she also seeks to contextualize opportunistic behavior—to be sensitive to history, norms, and contingent events. This is at bottom a study about candidate qualities—human nature, political character, the appetite for power—and the consequences of these for the successful pursuit of the presidential office. This, I believe, constitutes the core of the study and its greatest strength. In fact, in some ways this book is one of a small handful of works in recent memory to take very seriously the political and institutional implications of human nature—ambition, self-interest, opportunism—since the Federalist Papers.” — Scott C. James, UCLA

Lara M. Brown is an associate professor of political science at George Washington University. She holds a PhD, an MA, and a BA from the University of California, Los Angeles, as well as an MA from the University of Arizona. Dr. Brown has published articles in journals such as Congress and the Presidency, Presidential Studies Quarterly, and the Journal of Political Marketing. Prior to completing her doctorate, she served in President William J. Clinton's administration as a coordinator for corporate outreach at the U.S. Department of Education in Washington, D.C.

Chapter 6: Presidential Losers from Each Era

Chapter 7: An Abundance of Opportunism: The 2008 Presidential Election

Conclusion: Opportunistic Aspirants and the Methods of Selection