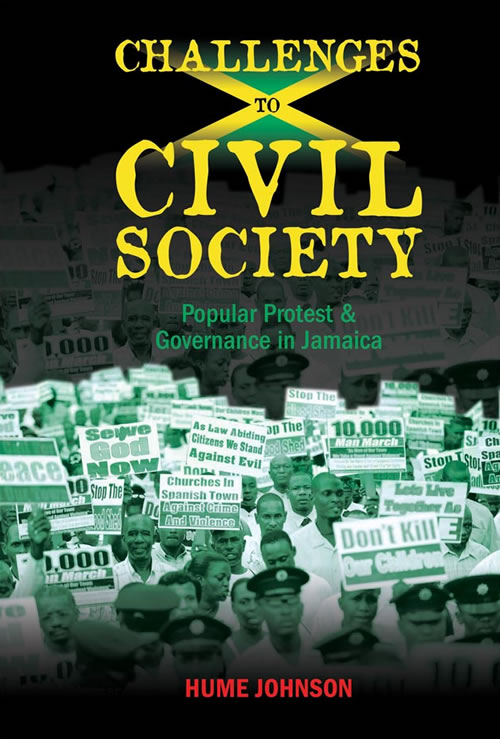 “This book is lucid and powerful in analyzing the uncivil aspects of civil society, disentangling the dynamics between protesters, the mass media, the general public and government in Jamaica. The book also demonstrates that female researchers such as Hume Johnson—like Nobel Prize–winning female political actors and activists—pair intelligence and persuasive power with pragmatism and courage.” — Joseph Soeters, Netherlands Defence Academy/Tilburg University

Despite widespread ‘hurrah’ and euphoria over its apparent virtues––including the capacity to enhance democracy, bring back citizens to the centre of a revivalist participatory politics, and thus disprove claims about citizen apathy and malaise–– pessimism abounds about civil society’s meaning and actual manifestation in different societies. Civil society continues to suffer from its two-faced nature and an inherent potential to contribute to its own demise. Although civil society retains enormous usefulness as a space for citizens to associate, engage and participate to secure common interests and goals; defend collective causes; build social capital and, in so doing, improve the quality of society, civil society often displays a tendency to self-destruct and resemble everything that, properly speaking, ‘civil’ society is not. This political and moral irreconcilability of the civil society project is manifested in popular protest and other aspects of citizen politics in Jamaica, as elsewhere.

This book undertakes an in-depth case study of contemporary protests to illustrate not only the challenges to building civil society in Jamaica but also the requirement for the current scholarship to reconcile its moral and thematic ambivalence. For example, whereas the capacity of citizens to band together to make claims upon the state exemplifies the civil (read as positive) dimensions of civil society, the typically non-peaceful strategies and tactics deployed by citizen-protestors as they seek ‘justice’ exposes its uncivil (read as negative) aspects. The presence of rogue actors called ‘dons’ in the civil sphere and their construction of outlaw systems of governance at the community level––eclipsing the functions of the Jamaican state, and of organised civic groups––also illustrates the ‘uncivil’ dimension of civil society in this context. In other words, using Jamaica as empirical template, the book not only accounts for the reality of civil society but also demonstrates that the official literature perpetuates a universal misunderstanding and misrepresentation of civil society by variously denying its capacity and tendency to be negative and uncivil.

Recent studies of the ongoing political and social crisis in Jamaica have approached it from a variety of perspectives. Criminologists, for instance, point to the role of organized crime in subverting democratic rule in Jamaica. In their turn, political analysts attribute the crisis of democracy to the failure of political leadership and the collapse of middle class moral authority, while still other analysts point to the urban poor as powerful political actors whose social power not only transformed Jamaican politics and society, but made the poor a force to be reckoned with. Yet very little scholarly attention has been made to the social dimensions of this crisis. This study also looks at the crisis but its focus is on the style and moral content of protest politics in the streets. Its intervention in the debate is to highlight how much incivility and belligerence have become defining features of the politics of protest in Jamaica and to show that this might rather disempower rather than empower the most marginalized.

In this sense, the book corrects the inadequate reading of civil society by focusing on activities and actors within Jamaican civil society that skirt and/or blur the boundaries between legality and extra-legality, uphold contrary values and exhibit tendencies that negate the wisdom of political networks engaging in collective citizen action as necessarily civilizing agents, and civil society as a constantly positive force. By also focusing on the shortcomings of the Jamaican state, the book offers important insights into both the performance of the state and the character of civil society, as well as canvasses an understanding of the real nature of the relationship between these two entities. The book explores the role of social inequality, media coverage, ingrained feelings of (social) injustice among the citizenry and variable state response and performance as contributory factors in the existing mood of citizen politics in Jamaica. By focusing on both civil and uncivil actors, legal and extra-legal practices, processes and dimensions, the book questions who should (or should not) be represented in civil society and how the voices of the marginalized are to be heard.

This study is also unique in acknowledging the importance of structure––political and social institutions as well as patterns of political representation––and the role of individual agency and responsibility of citizens in determining the character of citizen politics and civil society in Jamaica. Poor state performance in delivering public goods, the state’s abuse and mistreatment of the poor, sensationalized media coverage of popular protests and the presence of rogue actors among the poor all are compelling features of the book. This is because they contribute persuasively to the argument of the consolidation of insolent, uncivil dispositions and political behaviors in post colonial Jamaica. Indeed, the study looks squarely at the influence of violence as a tool of political engagement by otherwise powerless subaltern classes in Jamaica and accepts that unconventional methods of political engagement such as protests are also being employed as effective additional methods to more institutionalized strategies (globally). Yet, the book’s distinctiveness lies in its scrutiny and critique of the long-term consequences of protesters’ uncivil actions for the future of civil society in Jamaica.

This is an important book for collections in political science, sociology, anthropology, and media studies/communications, especially given the increasing interest in understanding popular protests, violent social movements, resistance cultures as well as radical political culture, democracy and civil society across the developing and developed world. The book will also hold wide appeal among policy makers, political actors, activists, civil society practitioners, and specialists in international development as a result of its strong focus on civil society. This will also be an excellent text for undergraduate students and above, particular those studying international relations.

“This book is lucid and powerful in analyzing the uncivil aspects of civil society, disentangling the dynamics between protesters, the mass media, the general public and government in Jamaica. The book also demonstrates that female researchers such as Hume Johnson—like Nobel Prize–winning female political actors and activists—pair intelligence and persuasive power with pragmatism and courage.” — Joseph Soeters, Netherlands Defence Academy/Tilburg University

“Hume Johnson’s book is an elegant and timely exploration into the incivility of civil society in Jamaica. The book is a pioneering work that reconceptualises civil society to examine the nature and consequences of popular protest in Jamaica. It juxtaposes the importance of political and social structures and institutions with the role of individual agency and responsibility of citizens to chart the dimensions of often unruly citizen politics in Jamaica. Through insightful and methodical analysis of the media as well as criminal donmanship, Johnson makes an impassioned and cogent case to understand civil society in its entirety, warts and all. This is a welcome contribution to the field, which will be invaluable to our rethinking the concept of civil society, and adds much to our knowledge and understanding of Jamaican society and politics.” — Priya Kurian, University of Waikato, New Zealand

“In the aftermath of the upsurge of popular protests against perceived economic injustice in various parts of the globe, classic dilemmas about appropriate stratagems of popular resistance have forced their way back to the hub of academic discourse. Prime among these is the question of violence, posed thus: what is the right relationship between popular protest and violence, and can civil society’s claims to civility be maintained even if the former resorted to violence? As Hume Johnson cogently argues in this thoughtful and amply illustrated monograph, these questions are best answered within specific socio-historical frames. In her analysis, Johnson nudges us to rethink our assumptions about civil society, violence, the state, the mass media, and those controversial social agents we are liable to label as ‘outlaws’. Johnson’s speculations are intriguing, not just because they trouble our assumptions about particular social categories, but because the author also offers an alternative explanatory model to reimagine the interface of grievance, protest, and coercion within a given formation. Though Johnson’s primary focus is Jamaica, the political history of which she expounds with uncommon brio, the utility of her arguments for societies in the throes of social unrest cannot be overemphasized. This is an important book that pushes the frontiers of the debate on civil society, protest, the media, and the state. I cannot speak highly enough of its many merits.” — Ebenezer Obadare, University of Kansas

Hume Johnson is an associate professor in the Feinstein School of Humanities, Arts and Education at Roger Williams University in Rhode Island. She holds a PhD in political science and public policy from the University of Waikato, New Zealand, a Masters of Science and Bachelors of Arts degrees from the University of the West Indies, Jamaica. She has published on civil society and governance issues in several journals including Political Studies, International Journal of Media and Cultural Politics, and Crime Prevention and Community Safety. Dr. Johnson is also a recognized broadcast journalist and political commentator.