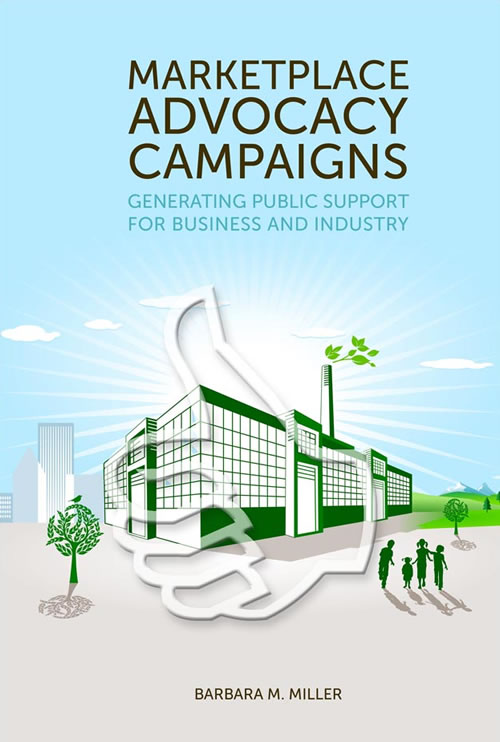 Marketplace advocacy is often considered a controversial form of public relations/advertising because it moves beyond the traditional realm of promoting an organization’s image, product, or service, into efforts to communicate an organization’s position on an issue or societal concern. Despite the proliferation of marketplace advocacy campaigns, there has been little professional or academic research published. This study develops a model and presents an historical account and case studies on this understudied controversial form of PR and advertising

Marketplace advocacy is often considered a controversial form of public relations/advertising as it moves beyond the traditional realm of promoting an organization’s image, product, or service, into efforts to communicate an organization’s position on an issue or societal concern. Marketplace advocacy campaigns differ from public service campaigns in that they not only promote a common good, but they also focus on protecting the company’s market. These campaigns involve a combination of advertising and public relations techniques to inform, educate, and persuade the general public and specific stakeholder groups about the contributions of a business to society and its contribution to the economic health of the community. Despite these surface motives, they are also commonly initiated to influence a legislative outcome or public policy debate and/or reduce public calls for government intervention in corporate and industrial activities.

Marketplace advocacy campaigns typically arise in response to burgeoning societal concerns that may result in low credibility and trust among various segments of an organization’s audience. In recent years, marketplace advocacy campaigns have become increasingly prolific as public interest in energy and the environment have grown. Examples include GE’s “Ecomagination” campaign to promote energy-efficient products and environmentally-friendly business practices and DuPont’s “Open Science” initiative to promote efforts to make industries more eco-friendly and tap new energy sources. These campaigns are also commonly initiated by industry associations representing the collective interests of the sector, such as the American Petroleum Institute (“Energy Tomorrow”), the American Coalition for Clean Coal Electricity (“America’s Power”), the Council for Biotechnology (“Good Ideas are Growing”), and the Marcellus Shale Coalition (“Energy to Fuel our Future”).

Despite the proliferation of marketplace advocacy campaigns, there has been little professional or academic research published evaluating the potential outcomes of this form of communication on audiences. Ostensibly the last book devoted to advocacy advertising was published in 1977. While the political and social changes of the 1970s are often credited with the rise of advocacy campaigns among many industries, surging public and media criticism regarding issues such as the environment and energy in recent years have made marketplace advocacy campaigns commonplace in today’s advertising landscape.

While this form of advocacy is relatively specialized, it represents an increasingly important and prevalent form of advocacy. It is important for both scholars and practitioners to understand how these campaigns may influence overall trust in the sponsoring industry as well as public acceptance of an industry’s agenda. The model developed and tested in this book provides credence for the idea that these campaigns may be effective at accomplishing both of these objectives and demonstrates how industry approval, the overall goal of marketplace advocacy, might be achieved. By incorporating environmental concern as a measure of statistical control in both the model testing and follow-up analyses, the model also provides evidence of the moderating influence of heightened levels of environmental concern on marketplace advocacy outcomes. The book also provides an historical account of marketplace advocacy and describes several campaign case studies for context.

Appendix B: Intercorrelations Between Model Variables