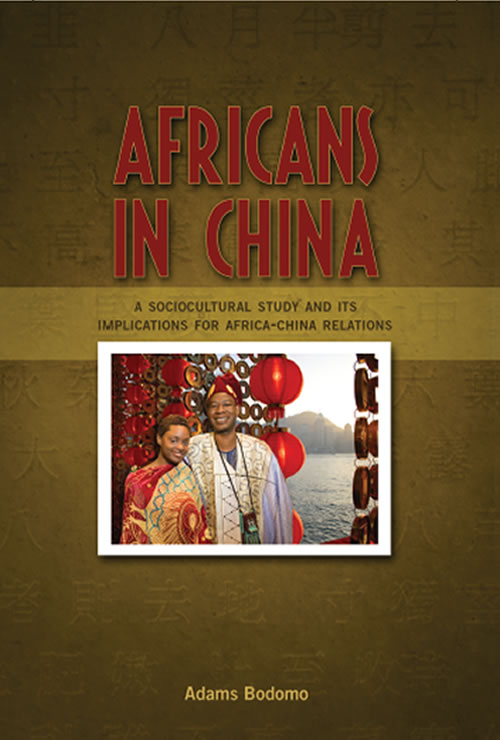 Africans in China: A Sociocultural Study and Its Implications for Africa-China Relations by Adams Bodomo

"The issues covered in this book are remarkable. The lucidity and ease with which the narrative runs is masterly. Bodomo expresses himself and raises issues with simplicity and analytical candour and offers a picture of Africans in contemporary China ... Sound and mutually beneficial Afro-Chinese relations are matters of strategic interest to both Africans and Chinese. This book provides an open window on to these realities." - Kwesi Kwaa Prah, Director of the Centre for Advanced Studies of African Society (CASAS)

At the beginning of the twenty-first century, Africa and China began to establish closer links, starting with the formation of the Forum for China Africa Cooperation (FOCAC) in 2000. FOCAC and other Africa–China relations platforms aim to promote mutually beneficial sociopolitical, socioeconomic, and sociocultural relations between these two major parts of the world. However, these closer ties are also seen by some third-party analysts, especially many scholars and politicians from the West, as attempts by China to exploit African resources to fuel its fast-growing economy and, possibly, end up colonizing the continent. Africa–China relations are thus a topic of intense academic discussion. On the back of these closer government-to-government contacts between Africa and China are also closer people-to-people interactions in the form of travel and the establishment of Diaspora communities by Africans in China and Chinese in Africa.

While there is much discussion on Africa–China relations, the focus tends to lean more on the Chinese presence in Africa than on the African presence in China. There are numerous studies on the former but, with the exception of a few articles on the presence of African traders and students in China, little is known of the latter, even though an increasing number of Africans are visiting and settling in China and forming migrant communities there. This is a phenomenon that has never happened before the turn of the century and has thus led to what is often termed Africa's newest Diaspora. This book focuses on analyzing this new Diaspora, addressing the crucial question: What is it like to be an African in China?

Africans in China is the first book-length study of the process of Africans travelling to China and forming communities there. Based on innovative intermingling of qualitative and quantitative research methods involving prolonged interaction with approximately 800 Africans across six main Chinese cities––Guangzhou, Yiwu, Shanghai, Beijing, Hong Kong and Macau––sociolinguistic and sociocultural profiles are constructed to depict the everyday life of Africans in China. The study provides insights into understanding issues such as why Africans go to China, what they do there, how they communicate with their Chinese hosts, what opportunities and problems they encounter in their China sojourn, and how they are received by the Chinese state. Beyond these methodological and empirical contributions, the book also makes a theoretical contribution by proposing a crosscultural bridge theory of migrant-indigene relations, arguing that Africans in China act as sociopolitical, socioeconomic, and sociocultural bridges linking Africa to China. This approach to the analysis of Diaspora communities has consequences for crosscultural and crosslinguistic studies in an era of globalization.

Africans in China is an important book for African Studies, Asian Studies, Africa–China relations studies, linguistics, anthropology, sociology, international studies, and migration and Diaspora studies in an era of globalization.

Listen to Cambria Press author Adams Bodomo on Voice of America being interviewed about Africans in China. Read the related article too.

"Scholars from a variety of countries and disciplines have produced recent essays on the African presence in China ... They have adopted a more nuanced approach than the media and none more so than Adams Bodomo in this pioneering, full-length treatment. He had already published important journal articles on Africans in China, but his book significantly expands on his previous work and is now essential reading for scholars in the field." —The China Quarterly

"Through the pages of Africans in China, the reader is confronted with the first book-length description and analysis of African migrants into China. Moreover, its theoretical and methodological novelty among the studies about Africa and China places it as an outstanding resource not only for cultural contact studies but also for sociology, linguistics and anthropology. Definitely, Bodomo has brilliantly opened the way to desirable future research that complements the major question: What is it like to be an African in China?" —Sociolinguistic Studies

"The issues covered in this book are remarkable. The lucidity and ease with which the narrative runs is masterly. Bodomo expresses himself and raises issues with simplicity and analytical candour. Mercilessly frank and balanced, the author offers a picture of Africans in contemporary China which goes a long way towards giving some clarity to a topical issue of particular interest to Africans and Chinese ... Sound and mutually beneficial Afro-Chinese relations are matters of strategic interest to both Africans and Chinese. How these relations develop will partly depend on the lot of Chinese in Africa and Africans in China. This book provides an open window on to these realities." —Kwesi Kwaa Prah, Director of the Centre for Advanced Studies of African Society (CASAS)

Chapter 8: Africans in China and Beyond