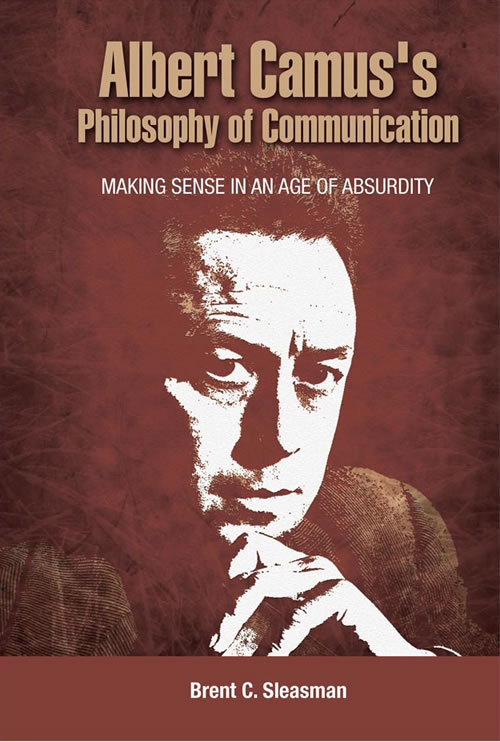 Albert Camus's Philosophy of Communication: Making Sense in an Age of Absurdity by Brent C. Sleasman

The life and work of Albert Camus provides insight into how to navigate through an absurd historical moment. This is the first book-length study that situates Camus’s work within the study of communication ethics and philosophy of communication, guiding readers on reinterpreting Camus’s work for the twenty-first century. Through this study, it becomes clear that Camus was an implicit philosopher of communication with deep ethical commitments.

The life and work of Albert Camus provides insight into how to navigate through an absurd historical moment. Camus’s role as a journalist, playwright, actor, essayist, philosopher, and novelist allowed him to engage a complex world in a variety of capacities and offer an array of interpretations of his time. The historical circumstances of the twentieth century provided a common experience for Camus and many others under the influence of European society; these experiences included his father’s death in World War I, participation in the French Resistance during World War II, and efforts at offering a vision for rebuilding France following the German occupation at the conclusion of World War II.

Despite the importance of his life and writings, Camus’ work has rarely served as the central focus of research within the communication discipline. This project connects his exploration of the absurd with the formal study of communication ethics by placing Camus in the foreground. The metaphor of absurdity provides an opportunity to examine philosophical hermeneutics in relation to Camus’s insights. The work of Paul Ricoeur and Hans-Georg Gadamer, emphasizing the role of metaphor, provides the methodological framework for this project. While many differences exist between the historical moment of Camus and the contemporary postmodern moment, both represent a time in which there is no longer paradigmatic certainty.

Albert Camus provides insight into how one can benefit from listening to relevant voices from previous generations. It is important to allow the time to become familiar with those who sought answers to similar questions that are being asked. For Camus, this meant discovering how others engaged an absurd historical moment. For those seeking answers, this means listening to the voice of Albert Camus, as he represents the closest historical perspective on how to make sense of a world that has radically changed since both World Wars of the twentieth century. This is an intentional choice and only comes through an investment of time and energy in the ideas of others. Similar to Albert Camus’s time, this is an age of absurdity; an age defined by contradiction and loss of faith in the social practices of the past. When living in such a time, one can be greatly informed by seeking out those passionate voices who have found a way despite similar circumstances. Many voices from such moments in human history provide first-hand insights into how to navigate such a time. Camus provides an example of a person working from a constructive perspective, as he was willing to draw upon the thought of many contemporaries and great thinkers from the past while engaging his own time in history.

As the first book-length study of Camus to situate his work within the study of communication ethics and philosophy of communication, Brent C. Sleasman helps readers reinterpret Camus’ work for the twenty-first century. Within the introduction, Camus’ exploration of absurdity is situated as a metaphor for the postmodern age. The first chapter then explores the communicative problem that Camus announced with the publication of The Fall––a problem that still resonates over 50 years after its initial publication. In the chapters that follow other metaphors that emerge from Camus’ work are reframed in an effort to assist the reader in responding to the problems that emerge while living in their own age of absurdity. Each metaphor is rooted in the contemporary scholarship of the communication discipline. Through this study it becomes clear that Camus was an implicit philosopher of communication with deep ethical commitments.

Albert Camus's Philosophy of Communication: Making Sense in an Age of Absurdity is an important book for anyone interested in understanding the communicative implications of Camus’ work, specifically upper-level undergraduates, graduate students, and faculty.

Introduction: Meeting Absurdity: Albert Camus and the Communication Ethics of the Everyday

Chapter 1: The Fall: A Communicative Risk in an Age of Absurdity

Chapter 2: Embedded Rebellion: An Ethical Response in an Age of Absurdity

Chapter 3: Dialogue: Ethical Engagement in an Age of Absurdity

Chapter 4: The Public Sphere: Navigating Opposing Agendas in an Age of Absurdity

Chapter 5: Responsibility in an Age of Absurdity

Conclusion: Hope in the Midst of Absurdity