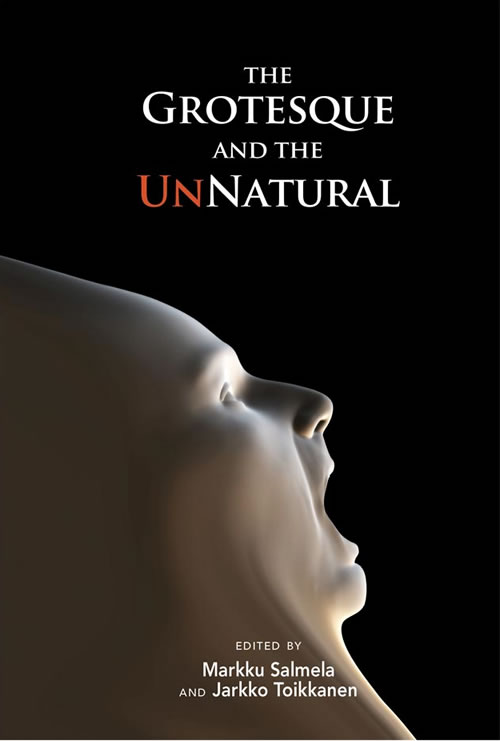 The Grotesque and the Unnatural by Markku Salmela and Jarkko Toikkanen

The book contributes to current discussions on the grotesque in contemporary literary and cultural theory from the perspective of one specific motif: the unnatural. Quite like the grotesque, observing the unnatural (and unnaturalness) reveals a resilient strain in critical thought, and the significance of this history gradually unfolds as the volume charts the progress of its main themes from the Renaissance to the present day.

The grotesque has provided both laymen and scholars with extreme delights for centuries: from the ornamental combining of rare motifs in antiquity to a hybridisation of structural genres in recent times; from fantastical fusions of humans and beasts to comic exaggerations of bodily aberrations and prosthetic postmodern visions. Eluding clear classification at all times, the notion has often been identified with ideas of contradiction and conflation and observed in relation to principles and categories such as estrangement (Wolfgang Kayser) and carnival (Mikhail Bakhtin), the sublime (Victor Hugo) and Victorian Gothic imagination (John Ruskin). In this context, the present volume appears as a synthesis and radical questioning of existing historical developments.

The book contributes to current discussions on the grotesque in contemporary literary and cultural theory from the perspective of one specific motif: the unnatural. Quite like the grotesque, observing the unnatural (and unnaturalness) reveals a resilient strain in critical thought, and the significance of this history gradually unfolds as the volume charts the progress of its main themes from the Renaissance to the present day. While in much current talk about theory and criticism certain related notions are still posited for and against each other––what is seen as normal or natural and what is not, and what should be seen as normal or natural and what should not––the discussions in The Grotesque and the Unnatural go a long way toward founding a new vista from which to observe this beguiling opposition.

The book presents a new perspective on the grotesque by considering it as a phenomenon which comes into being only through a negation of sorts, yet refusing to place it in a simple, normative pattern as nature’s antithesis or expressive gesture. As the articles demonstrate, the grotesque is always in the process of subverting or surpassing something, always not being ideal or sufficient to either nature or a social rule, and this very negation affects its status as a tool of transformation or emancipation from norm: the grotesque figure does not represent any particular stage of development or natural state of being. As such, the grotesque hints at and hinges on something that exceeds habitual spheres of culture and communication but, as the book aims to show, this elusiveness of meaning gives no cause for analytic despair. By tracing the involutions of the grotesque with the unnatural in specific literary cases, the book evokes centuries of Western cultural history and ultimately focuses on two questions: How and why does the grotesque tend to negate nature, and how does it affect our understanding of what we see?

The diverse materials and historical scope of The Grotesque and the Unnatural make the book, in its exceptional thematic unity, a valuable addition to the fields of literary and cultural studies.

Markku Salmela holds a PhD from University of Tampere, Finland, where he teaches as a university lecturer in English Philology. In addition to his research on Paul Auster, he specializes in American literature, literary naturalism, postmodernism, and the poetics and politics of fictional spaces. Dr. Salmela has published articles in a number of books and in journals including Critique: Studies in Contemporary Fiction.

Jarkko Toikkanen holds a PhD from University of Tampere, Finland, and his most recent appointment was Visiting Research Fellow at the University of Westminster, London, UK, He is completing a book project on the intermedial experience of horror in literature. His areas of expertise include deconstruction and Paul de Man, word and image theory, affect theory, and poetics of romanticism and modernism.

Reading the Grotesque through the Unnatural

Chapter 1. The Grotesque: Concept and Characteristics

Chapter 3. Changing One’s Viewpoint on Nature: The Grotesque and French Medical Discourse in the Sixteenth Century

Chapter 5. From the Naïve to the Unnatural: Friedrich Schlegel’s Early Romantic Notion of the Grotesque

Chapter 8. The Grotesque Landscape and the Naturalistic Method

Chapter 9. The Unnaturalness of Nature: Robert Frost’s “The Fear”