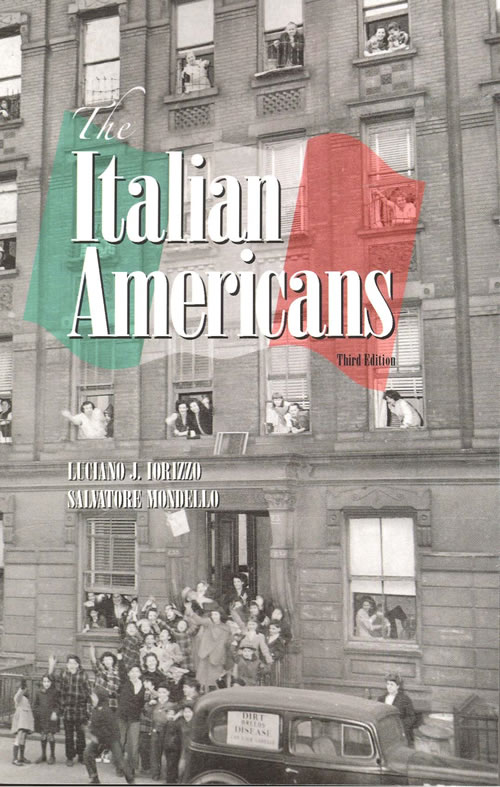 Now in its third edition, this work is recognized as the definitive achievement and standard text on the Italian American experience.

Since its publication in 1971, The Italian Americans has been widely recognized as the standard text in its field.

In 1980 this highly acclaimed volume was completely revised and updated in a second edition. Dr. Luciano J. Iorizzo and Dr. Salvatore Mondello added new perspectives to their examination of the Italian experience in America from colonial days to modern times. They explained how the Italian immigrants and their descendants were integrated into American society and how the Italian American identity evolved from village and provincial origins.

The authors focused on the contributions of Italian Americans to our nation's artistic, social, economic, political and religious life. The second edition placed considerable importance to such immigrant institutions as the family, the Italian-language press and public and parochial schools in the integration of the Italians in American society. The discrimination and violence the Italians encountered, the myths about their alleged criminality and their images in the mass media are examined.

Readable, comprehensive and carefully researched, The Italian Americans will engross and delight a new generation of general readers while serving as an essential source for contemporary scholars. Cambria Press is proud to make this classic study in ethnic history once again available to readers.

This book is the definitive achievement on the Italian American experience and has received rave reviews as follows:

"This is an excellent introduction to the history of Italian immigrants in the United States." - Professor Samuel Barnes, Department of Political Science, University of Michigan Ann Arbor, The Annals of the American Academy

"It is written with verve and conviction. It is the first attempt by professional historians to tell the story of Italian Americans from the seventeenth century to the present." - Arthur Mann, Professor of American History, University of Chicago

It is a credit to Professors Iorizzo and Mondello that they have written what is probably the best scholarly treatment available in a single volume." - Ernest S. Falbo, SUNY at Buffalo, Italian Americana

"Those laymen who take pride in their Italian origins will want to have this book in their homes to read, reread and share with the members of their families." - Lewis Turco, Professor of English, SUNY at Oswego

Salvatore Mondello was born on February 27, 1932 in the Italian American community of East Harlem in New York City, and was brought up by his maternal grandparents, immigrants from the Sicilian village of San Fratello. Mondello attended Benjamin Franklin High School and after his graduation in 1951, he entered the larger world of New York University and decided to devote most of his professional career to the study of the Italian American experience.

Professor Mondello received his Ph.D. in 1960 in American history from New York University and has been teaching at the Rochester Institute of Technology since 1967, where he occupies the position of professor of history. His many articles in the areas of Italian American studies, art history, Baptist studies, and popular culture have appeared in such scholarly journals as Italian Americana, Journalism Quarterly, Social Science, the Polish Review, The New York Historical Society Quarterly, and The Journal of Popular Culture. He contributes articles regularly to Foundations, the journal of Baptist history and theology. He is researching the history of European Baptist minority groups in America from the colonial period to the present.

Professor Mondello has received grants from the State University of New York and from the National Endowment for the Humanities; both grants were received for his work on John Vanderlyn, the New York-born artist of the early national period. He serves as a grants proposal reviewer for the NEH. Professor Mondello is a member of the American Institute for Italian Studies and has served as secretary-treasurer and one of the founders of the American Italian Historical Association.

Luciano J. lorizzo was born on March 31, 1930 in the Park Slope section Brooklyn bordering the Italian neighborhood from which his family had recently moved. He was raised by his paternal grandmother and her children. He attended parochial schools through the first semester of college when he transferred to Brooklyn College.

His studies there were interrupted in 1951 when he joined the U.S. Air Force. Sent to Italy in 1953, he became interested in the Italian language and formally studied it when he returned to school at Syracuse University in 1955.

Dr. Iorizzo joined the faculty at the State University of New York, Oswego, in 1962 where he is presently professor of history and coordinator of the Public Justice program. Professor lorizzo is a charter member and a past president of the American Italian Historical Association, and has been active at many national meetings concerned with Italian American studies. He has received grants from the Association of State and Local History and from the Research Foundation of the State University of New York. Active as a reviewer, he has served as consultant to SUNY Albany's Italian-American Studies program and for the Urban Institute in Washington, D.C. He is presently a member of the board of directors of the National Italian American Foundation and listed in the latest edition of Who's Who in the East.