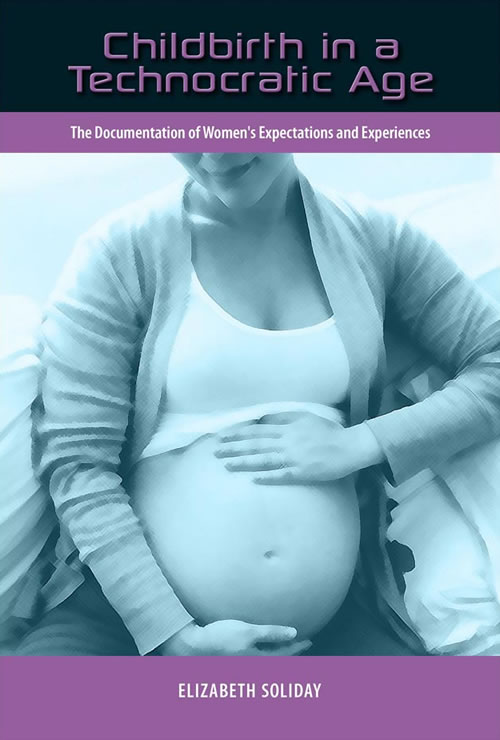 Childbirth in a Technocratic Age: The Documentation of Women’s Expectations and Experiences by Elizabeth Soliday

“A very organized and readable book ... Healthcare providers from various disciplines would likely benefit from reading Elizabeth Soliday’s compassionate book in which she advocates for mothers by emphasizing the many factors, most important of which is patient autonomy, that contribute to maternal satisfaction in the labor and delivery process.” – Archives of Women's Mental Health

Across time and place, pregnancy and childbirth rank among the most transformative physical and psychological events in women’s lives. Women’s childbearing experiences depend not only on their own biology and psyche but also on the nature and quality of care they receive. The nature of the prevailing obstetric care model in the early 21st-century United States has been described as “high-tech, low touch,” highlighting its emphasis on using medical technology, as opposed to non-technological care and support, to control unproblematic physical processes on the argument that this approach improves maternal safety and comfort. However, it should be noted that reasonably reliable national data fail to show significant maternal or newborn health gains corresponding to recent, dramatic rises in hospital obstetric procedures such as labor induction, labor acceleration, and cesarean delivery.

In this context where medical intervention, necessary or not, assumes an increasingly central role in the childbearing equation, questions of what mothers expect to happen in labor and delivery and how their subsequent birth experiences meet those expectations become paramount. Global numeric indicators cannot capture the quality of women’s reactions to childbirth itself, particularly as maternal care shifts in response to consumer interests it presupposes, offering options for comfort, care, and even the possibility of foregoing the labor process altogether. This work reflects the critical need to document early 21st-century U.S. mothers’ own words on what they expected to happen in childbirth and later, how labor and delivery went and how it met their expectations.

Among this book’s most important contributions is its inclusion of extensive interview material drawn from 75 diverse women who spoke freely on their childbirth expectations and subsequent experiences. By itself, the interview material lends an important, though at times unsettling, insider perspective on how labor and delivery can unfold. The narratives also provide a maternal view on how those charged with their care respond during this physically and emotionally demanding transition. In addition, the book provides a timely analysis of scientific data on contemporary maternal care procedures, making plain why so many refer to 21st-century mainstream obstetric care as “technocratic.” The scientific data serve as an excellent backdrop for more extensive coverage of the maternal interviews, organized around the distinctions mothers made related to the childbirth pathway on which they anticipated traveling such as natural childbirth in a hospital, planned cesarean delivery, or planned vaginal birth after cesarean. The pathways are in turn discussed in terms of their relationship to an underlying technocratic, humanistic, or holistic maternal care philosophy.

Historically, it has been assumed that maternal biological forces are the primary drivers of what ultimately becomes a woman’s childbirth experience. However, this book’s unique approach to explaining birth experiences as a function of an anticipated childbirth pathway with a distinct, underlying care philosophy indicates that biological forces only partly explain how and why maternal expectations of childbirth may align with or stray far from what they originally anticipated. A final integrative chapter offers critical commentary and recommendations tied to what, from women’s perspective, they believed they could really expect compared to the reality of childbirth in the early 21st century United States.

“A very organized and readable book ... Healthcare providers from various disciplines would likely benefit from reading Elizabeth Soliday’s compassionate book in which she advocates for mothers by emphasizing the many factors, most important of which is patient autonomy, that contribute to maternal satisfaction in the labor and delivery process.” – Archives of Women's Mental Health

Elizabeth Soliday is an associate professor of psychology at Washington State University Vancouver (USA) and a licensed clinical psychologist. Her research interests include maternal and pediatric health. Her articles and book chapters have appeared in academic and professional publications such as the Journal of Pediatric Psychology, Pediatrics, the Encyclopedia of Motherhood, and the Yale Journal of the Humanities in Medicine. Her work has been funded by the National Institutes of Health and national foundations.

Chapter 7: Expectations and Experiences of Vaginal Birth after Cesarean (VBAC)