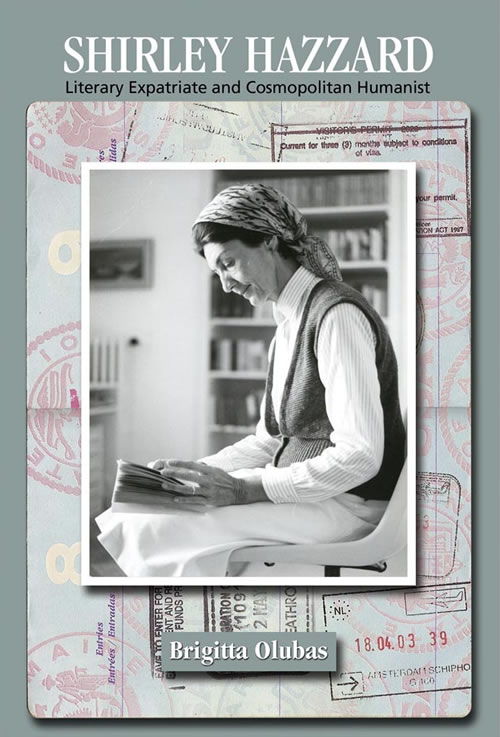 "As the first book on Hazzard, Olubas’s monograph makes an important contribution to contemporary literary scholarship. Yet the book’s achievement far exceeds its initiatory work ... out of bounds – in the best sense. This book extends far beyond any national, aesthetic, or ideological disciplinary categories. – Contemporary Women’s Writing

Shirley Hazzard is one of Australia’s most significant expatriate authors, and a major international literary figure by any measure. Her work has been extensively and extravagantly praised by writers and reviewers, such as Pulitzer Prize–winning novelist Richard Ford: ‘If there has to be one best writer working in English today it’s Shirley Hazzard.’ Similarly, novelist Michael Cunningham: ‘One of the greatest writers working in English today, and London Times critic Brian Appleyard ‘For me, the greatest living writer on goodness and love’.

Shirley Hazzard has lived in New York and Capri since 1951. Internationally, she is one of the great writers of movement, passage, transposition and transit. Her novels trace the fate of a series of young expatriate female protagonists in the geographical and emotional vistas opening up after World War II, but before the social upheavals of feminism. They take her readers into moral territory that is at once utterly sure and breached at every turn, with the certainties of romance forms tested by human vulnerability and the often brutal social and political canvas of modern life.

She has published four novels: The Evening of the Holiday (1966), The Bay of Noon (1970), The Transit of Venus (1980) and The Great Fire (2003); two collections of stories: Cliffs of Fall and Other Stories (1963) and People in Glass Houses (1967); two monographs on the United Nations: Defeat of An Ideal: A Study of the Self-Destruction of the United Nations (1973) and Countenance of Truth: The United Nations and the Waldheim Case (1990); a memoir of her friend Graham Greene: Greene on Capri: A Memoir (2000); and, most recently, a collection of her own and her late husband Francis Steegmuller’s occasional writings on Naples: The Ancient Shore: Dispatches From Naples (2008). All her fiction has remained continuously in print since its first publication.

She has received major literary awards including the 2003 US National Book Award, the 2004 Miles Franklin Award, the 2005 William Dean Howells Medal for best American novel, the 1981 US National Book Critics Circle Fiction Award, the 1977 O. Henry Short Story Award; and has been shortlisted for the Orange Prize and the (‘Lost’) Man Booker prize. She is a Fellow of the American Academy and Institute of Arts and Letters and an Honorary Fellow of the Australian Academy of the Humanities.

Despite the critical acclaim for Hazzard’s work, there has not yet been a full critical study, and only a handful of scholarly articles have been published since the early 1990s. This scholarly neglect is in part a consequence of Hazzard’s complicated location outside the limits of national literary canons.

In particular, Hazzard’s highly significant writing about the United Nations has never before been considered by critics, and it is not widely known today that she was the first writer to publish an account of the US State Department McCarthyist involvement in UN hiring of staff from its earliest years, and the first person to air claims that UN Secretary-general Kurt Waldheim had concealed details of his World War II activities. This public writing stands in a fascinating relation to her highly wrought literary fiction, presenting particular challenges to her critics and readers.

This study brings together Hazzard’s highly regarded literary fiction and her impassioned, polemical critiques of the United Nations through the rubrics of her humanist thought and her deep commitment to internationalist, cosmopolitan principles. Chapter 1 provides the first critical analysis of Hazzard’s public writings, paying particular attention to their rhetorical and poetic structures and their moral appeals. Olubas then works through each of Hazzard’s published works of fiction in turn.In chapter 2, she analyses the two collections of short stories through their shared concern with the question of institutions––bureaucracy and marriage––in modern life. Chapter 3 turns to Hazzard’s two early novels, both set in Italy, and examines the appeal made in each to Romantic poetry, and to the ways narrative, desire and death play out across the stories of love. Chapters 4 and 5 are devoted to Hazzard’s two great novels, The Transit of Venus and The Great Fire, respectively. The Transit of Venus is analysed as a melodrama, with particular focus on its complex narrative manipulation of concealment and revelation, and the ethical drive of its central love story. The final chapter focuses on the interplay of love and war in The Great Fire, and argues that this novel returns Hazzard’s readers to her own journey, her departure from Australia at the pivotal points of post-war Asia: colonial Hong Kong and post-nuclear Hiroshima.

"Olubas’s stated intention, from the outset, is to map the terrain, to pave the way for further work to be done, and this proves to be, if anything , modest with respect to what she has already achieved ... this book—exacting though it is in pursuit of the intricacies of Hazzard’s design—demonstrates what a gift intelligent, passionately engaged and theoretically attuned literary criticism can be. Olubas helps us to grasp the warp and weft of Hazzard’s ethical concerns, channelled through her commitment to the word and to her art, in her historical context and development over time. She shows us how these threads are intricately woven together, at every stage, in the realisation of what now appears as an astonishingly imaginative fictional universe, one that also makes its urgent address to the concerns of the contemporary world." – JASAL

“To read Brigitta Olubas’s Shirley Hazzard: Literary Expatriate and Cosmopolitan Humanist must be to have something like the experience of the readers of feminist recovery projects in the 1970s … As the first book on Hazzard, Olubas’s monograph makes an important contribution to contemporary literary scholarship. Yet the book’s achievement far exceeds its initiatory work … will certainly be of interest to scholars of contemporary Australian literature, new modernist studies, and gender studies. But both Hazzard and Olubas’s monograph on her are out of bounds – in the best sense. This book extends far beyond any national, aesthetic, or ideological disciplinary categories. Like Hazzard, it should travel far.” – Contemporary Women’s Writing

“Not just an intellectual exercise, or a scholarly pleasure, but also a profound relief to read.” – Southerly

"Scrupulously scholarly. Olubas's primary observations are laid down on vast tranches of secondary reading, and she situates Hazzard’s achievement within contemporary developments in literary theory. Nonetheless Olubas’s prose is lucid and, within the obligations of the academic context, elegant. Her work should be read by anyone with an interest in Hazzard or in cosmopolitanism more generally.” - The Australian

"Lucidly written, theoretically sophisticated, and scrupulously researched, Brigitta Olubas' account of Shirley Hazzard shows us just how this great cosmopolitan novelist has produced a body of work that lies outside and beyond 'terrain of the nation.'" – Michael Gorra, Mary Augusta Jordan Professor of English, Smith College

“In this original and wide-ranging study, Brigitta Olubas demonstrates how the geographical and emotional vistas that open up to the young expatriate heroines of Hazzard’s fiction are located in relation to the critique of post-war modernity in her political writing.” – Sue Sheridan, Professor of English and Women's Studies, Flinders University

“This important new book by Brigitta Olubas will transform Australian literary studies by placing the work of an expatriate writer at the centre of the field. Throughout her career, Shirley Hazzard has consistently adopted a cosmopolitan perspective as the moral and political ground of her work, and of her own unique and utterly original style. Through nuanced readings of Hazzard’s novels, stories, non-fiction and occasional writings, Olubas demonstrates how the effects of cosmopolitan mobility, of the ‘negative relation to nation’, give Hazzard’s novels their power to displace her readers from their present locations in time and space. Theoretically sophisticated, critically subtle and insightful, this is the first comprehensive study of this major twentieth-century writer, putting Hazzard at the centre of a newly worlded, international vision of Australian literature.” – Robert Dixon, Professor of Australian Literature, University of Sydney

Brigitta Olubas is a Senior Lecturer in English at the University of New South Wales (UNSW). She holds a PhD from UNSW, MA (Hons) from the University of Sydney and BA (Hons) from the University of Tasmania. She is currently vice president of ASAL (The Association for the Study of Australian Literature) and coeditor of ASAL’s scholarly journal, JASAL. Her previous publications include Remembering Patrick White: Contemporary Critical Essays (Rodopi 2010, edited with Elizabeth McMahon) and essays on contemporary literary and visual culture in major Australian literary journals, including Australian Literary Studies, JASAL, Southerly, and Australian Humanities Review.

Chapter 1: Writing about the United Nations

Chapter 4: The Transit of Venus