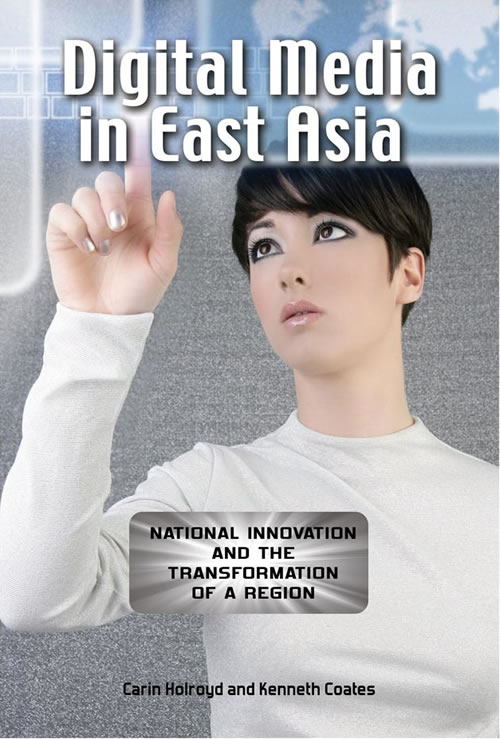 Digital Media in East Asia: National Innovation and the Transformation of a Region by Carin Holroyd and Kenneth Coates

The explosion of the digital media sector has had transformative implications for the 21st century, recasting economic structures and challenging societal norms. The advent of e-commerce, on-line gaming, e-books, mobile Internet, ubiquitous computing and other digital technologies and services has generated rapid and inchoate change around the world. Proponents of digital technologies argue that the digital economy could, if properly promoted, advance prosperity, create new businesses and shift economic, political and social power. In the aftermath of the Arab Spring of 2011, with growing awareness of the expansion of the mobile Internet across Africa and South Asia, and with the global dominance of Apple, Microsoft and Google, there is widespread consensus that this technological transformation is the most rapid and comprehensive in world history.

While many observers understand that East Asian companies and countries have played a significant role in the growth of the digital sector, few understand the scale of the region’s presence in what many see as the most vibrant element in the 21st century economy. On closer examination, however, it turns out that China, South Korea, Taiwan and Japan are more than prominent players in the new digital economy. Instead, as a collective force, East Asia dominates the global digital shift, producing much of the technology that underpins global digital integration and, now, establishing a steadily expanding presence in terms of digital content.

The lack of systematic attention to the rise of the digital media sector is puzzling. South Korea and Japan are the most wired countries in the world, with truly impressive transmission speeds and low costs. Taiwan and China dominate the manufacture of the technological backbones of the new economy, while producing many of the most high profile digital products from notebook computers to the iPad. Japan’s formidable presence in the production of video game consoles has been matched by the country’s contributions in video games, anime and other digital content. Korea, led by Samsung, has emerged from the shadows to become one of the most digitally enabled and technologically aggressive countries in the world. Less well known is the fact that the country has pioneered multi-player online gaming, thus expanding the shape and nature of the online economy. If there has been limited understanding of the extent of East Asia’s contributions to the digital sector, there is even less awareness of the role of national governments in the development of the manufacturing and content industries. The equally important question of the impact of mass digitization on regional integration has been left unexplored.

Digital Media in East Asia sees digital media as an important element in the integration of South Korea, China, Japan and Taiwan, with economic/commercial interaction now being accompanied by regional sharing of content and services. It argues that the underappreciated scale of East Asian activity in this key sector is setting up the region as a global leader in the new economy, quietly building global dominance in manufacturing, digital implementations and, most recently, digital content production. The book also argues that the rise of prominence reflects the still active presence of national governments in East Asia in selecting and promoting commercial success in emerging industries. The combination of infrastructure development, regulation, investment, training and promotion used by each of the national governments in the study has produced impressive national and regional integration across manufacturing, service, government and education. The national innovation strategies of the East Asian governments have, in sum, produced impressive results, sparking widespread private sector investment and the development of sizeable content production communities. Of particular importance is the reality that linguistic and cultural barriers are keeping most of the digital content within East Asia, the world’s fastest growing market for digital materials, a process that is re-enforcing the developing cultural ties within the region.

Digital Media in East Asia makes significant contributions to East Asian studies (Korea, Japan, Taiwan and China), the scholarship on national innovation, and to debates about the economic, social, cultural, and political importance of digital media. As such, it will be of value in media studies/cultural studies collections, and will be of interest to scholars of Asian business, political science, national innovation, and political economy.

"Provides a wide-ranging introduction to the various issues raised and presented by the digital revolution, with a focus on East Asia. ... The book is definitely one to recommend to interested students of East Asian Studies and New Media Studies...the book is of great current value."-Asiascape: Digital Asia

“Makes timely and valuable confirmations of this new trend … aptly traces and documents the historical evolution of digital media, including insights and ideas embedded in digital media in the East Asian context. … An accessible book with rich information. Several aspects highlight the value of this comprehensive book in understanding digital media in the region. First, this book is confirmation that the role of governments in science and technology remains and even intensifies amid neoliberal reform. … Second, the book’s structure deserves readers’ appreciation. This is technically not a comparative study; however, by paralleling four major countries’ major innovation strategies in the development of digital media, it dexterously provides comparison figures of some key issues so that the readers easily comprehend the nature of the development in East Asia. Last, but not least, this book offers an insightful perspective for understanding the future of East Asia in the realm of digital media. … Overall, this book provides the readers with a generous abundance of information on digital media and content in the East Asian context. It is well-researched and presented and makes a convincing contribution to a growing body of literature on digital media studies, East Asian Studies, and information technology policy … highly recommended.” – Pacific Affairs

Their previous works on Japan include Pacific Partners: The Japanese Presence in Canadian Business, Society and Culture; Japan and the Internet Revolution; and Innovation Nation: Science and Technology in 21st Century Japan.