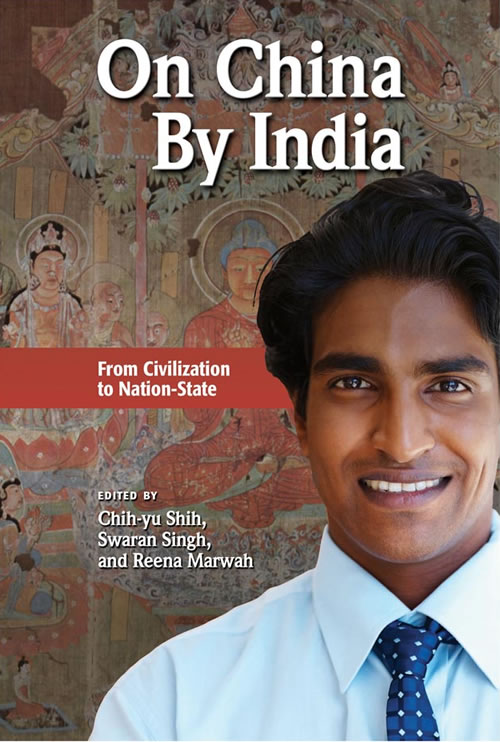 On China By India: From Civilization to Nation-State by Chih-yu Shih, Swaran Singh, and Reena Marwah

This groundbreaking collection is the first of its kind to examine China studies from a perspective that is not Western.The book is a report of the first stage of findings on how views on China and the intellectual history of China studies have been embedded in India’s modern history and its evolving self-knowledge as a nation-state. The rise of India and China has caused intellectuals of both countries to become increasingly conscious of each other.

India and China are two rising key players in the global political economy. The obvious contrast between Indian democracy and Chinese one-party rule results in very different national images. Both countries are also proud of their long history of civilization. Their views of each other––informed by their civilizational trajectories––are far richer than their institutional differences. This book studies specifically how civilizational knowledge about China among Indian academics has continued to impact contemporary Indian scholarship on China as nation state. To the extent that contemporary scholarship on China elsewhere lacks such civilizational sensibilities, and given the need for epistemological reflexivity in a multicultural world, this is a particularly urgent inquiry.

The immediate question is how China can be studied when the space inside is not socially or culturally distinguishable from the outside. In the decades after World War II, China studies have been shifting between social science and area studies, with the traditional Sinological concerns over humanity. Some religious underpinnings, which are based on the Huntingtonian prediction that China’s civilization is bound to clash with Christianity, remain powerful. As globalized China loses the clarity of its boundaries, a practice and strategy of self-identity emerges for those who carry the Chinese identity and those who do not. The objectivist social science assumption about knowledge on China can no longer hold. Moreover, China as “other,” staying outside of the range of scholarly and subjective self, is regarded as doubtful. Neither teleology toward a liberal end of history (as political science literature desires) nor a world government (as globalized literature hopes for) is promising.

The book is a report of the first stage of findings on how views on China and the intellectual history of China studies have been embedded in India’s modern history and its evolving self-knowledge as a nation-state. The rise of India and China has caused intellectuals of both countries to become increasingly conscious of each other. Their contemporary relationship still carries the legacy of the border clash of 1962. The views that Indian intellectuals take of China is of great concern to all schools of international relations and to policy and business practitioners around the world. The changing Indian perspectives that reflect the rise of India and the changing object of China studies together complicate and shift the images of China.

If China is a civilization––as Indian scholarship on Chinese Buddhism, art, literature, and language suggests––China’s social, cultural and political conditions and behavior should not change easily. This implies that India has to cope with Chinese phenomena when encountering them, instead of trying to transform China to fit into an Indian agenda. The seeming Indian passivity stemming from this civilizational longevity is in sharp contrast to the active engagement of a Christian world determined to spread a liberal democratic gospel to the Chinese people. Western academics seek to study how to make Chinese conditions right for such a liberal democratic result and how to measure the success of such an endeavor.

Once one delves into the premodern, or even looks for wisdom from the past, however, mundane present-day conflicts appear less significant. This is how Rabindranath Tagore was able to overcome his aborted appeal to Chinese tradition during his disappointing trip to China and still launch the first institute of China studies in India. It was this imagined civilizational affinity and mutuality that has undergirded a string of cultural appreciation toward, and intellectual interest in, China. This has allowed Indian China studies to transcend both the Sino-Indian border and Tibet issues, both of which have plagued bilateral relations between the two governments for over half a century.

This groundbreaking collection is the first of its kind to examine China studies from a perspective that is not Western. It will be essential for scholars in international relations, comparative politics, Asian studies, Buddhist studies, and strategic studies.

“This highly original book shifts our attention away from the preoccupations of the U.S. to India and from conventional social science and area studies perspectives to civilizational sensibilities. In a series of searching essays by well-informed Indian scholars, China’s rise appears in a fresh light. Rather than seeking to bend China’s experience only to the impatient expectations of secular liberalism, this important book reminds us of the imagined affinities that a civilizational understanding of self and other creates in India for China and the empathetic patience it engenders. Our understanding of China is greatly enriched by new insights that this broader vision yields.” – Peter J. Katzenstein, Walter S. Carpenter, Jr. Professor of International Studies, Cornell University

Chih-yu Shih teaches civilizational politics, intellectual history, China studies, and political psychology at National Taiwan University as well as National Sun Yat-sen University. Professor Shih is Editor-in-Chief of the Journal of Asian Ethnicity and author of over 70 books, including Civilization, National and Modernity in East Asia; Autonomy, Ethnicity and Poverty in Southwestern China; Collective Democracy: Political and Legal Reform in China; The Spirit of Chinese Foreign Policy, and many others. He received his Master’s degree in public policy from Harvard University and PhD in international studies from the University of Denver.

Swaran Singh is chairman of the Center for International Politics, Organization and Disarmament in the School of International Studies at Jawaharlal Nehru University. Dr. Singh is also the president of Association of Asia Scholars, general secretary of Indian Association of Asian and Pacific Studies, and a mentor at Center for Conflict Resolution & Human Security. He has traveled and written extensively on Asian Affairs, China’s foreign and security policy issues, Peace and Conflict Resolution, and India’s foreign and security policy issues. The most recent volume that he coedited is Emerging China: Prospects for Partnership in Asia. He sits on the editorial boards of a few international journals.

Reena Marwah is the secretary general of Association of Asia Scholars and an associate professor at Jesus and Mary College, Delhi University. She has an MPhil and a PhD in international business. Dr. Marwah is the recipient of the Robert McNamara fellowship of the World Bank and the Asia fellowship of the Asian Scholarship Foundation. She has five coauthored books, the most recent one being Contemporary India: Economy, Society and Polity. Her research interests include China and Tibet studies, gender and development issues, multilateralism, globalization and poverty. She is on the editorial board of Millennial Asia, an international journal of Asian studies

Chapter 4: The Chinese Language and China Studies in India (B. R. Deepak)