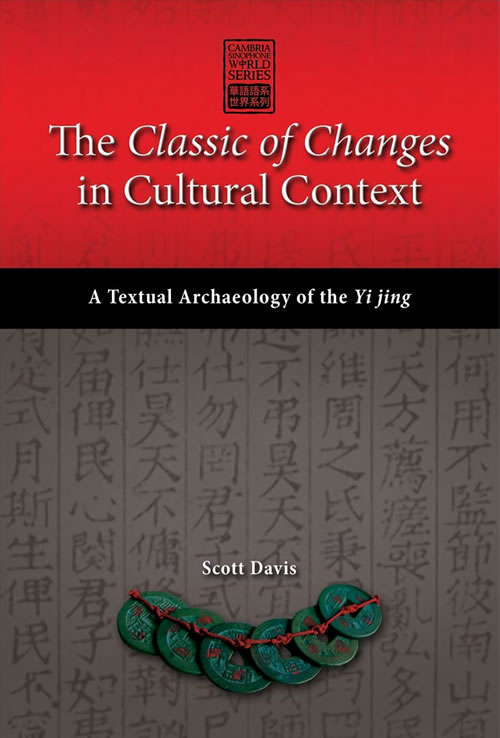 The Classic of Changes in Cultural Context: A Textual Archaeology of the Yi jing by Scott Davis

This highly unique study focuses on the archaic core of the Classic of Changes and proposes a structural anthropological analysis for two reasons. First, unlike many treatments of the Yi jing, there is a concern to place the text carefully in the context of the ancient culture which created it. Second, the approach differs from traditional exegesis which did not and ultimately could not address problems of textual understanding in a holistic sense. This book is not a translation of the Classic of Changes; it is a careful interpretation, or rather method of exploration, of the connectivities and topography of the text as a whole.

The Classic of Changes (Yi jing) is one of the most ancient texts known to human civilization, always given pride of place in the Chinese classical tradition. This venerable text is difficult for readers; with terse, archaic written statements; a divinatory orientation to the world; and a special formal framework. Focusing narrowly on philology or translation often exacerbates the puzzles it presents. Over millennia of reflection, answering to varying interests in various epochs of Chinese history, a voluminous commentary tradition has grown up, itself posing challenges for modern readers who may not share the unspoken assumptions of the interpreters over the ages. And yet the powerful fascination exerted by the Classic of Changes has preserved the archaic text, widely attracting readers with a continuing interest in trying to understand it as a source of reflection and guide to ordinary circumstances of human life. Its monumental influence over Chinese thought makes the text an indispensable element in any informed approach to Chinese culture.

Accordingly, the book focuses on the archaic core of the Classic of Changes and proposes a structural anthropological analysis for two main reasons.

First, unlike many treatments of the Yi jing, there is a concern to place the text carefully in the context of the ancient culture which created it, allowing a fuller appreciation of its divinatory mission, a unique orientation towards writing and literature. Employing a comparative method honed in analysis of ritual and symbolic practice from a wide range of human groups, structural analysis brings certain strategic advantages to addressing the organization of an archaic cognitive system. The explicit structural approach finds excellent resonance in the conceptualization of the text itself, as a verbal and imagistic field of expression arising from the formal, binary structure of lines, and from the symmetries, dynamically formed and broken, between hexagrams.

Second, the approach differs from traditional exegesis which did not and ultimately could not address problems of textual understanding in a holistic sense. Research on compositional problems leads necessarily from the whole to its parts, discovering distributional patterns in the overall text. Resembling treatments of mythological and ritual symbolism in other cultures, structural analysis proves apt in isolating design modules which articulate the organization of a profoundly unique effort to model the society and worldview of the people who consolidated millennia of ancient thought into an intriguing expression of the circumstances of the tradition. This book is not a translation of the Classic of Changes; it is a careful interpretation, or rather method of exploration, of the connectivities and topography of the text as a whole.

As a result of this deliberate methodological choice of approach to the classic, one is better able to visualize multiple domains of designed modules ingeniously integrated as a comprehensive structural model of an entire cultural universe, including social experience in an archaic culture, or the trajectory of an individual through the age ranks successively traversed in the lifetime of any member. By isolating the social forms of an individual life, against the background of the archaic cosmology, as the structural preconditions for each randomized divination, this analysis succeeds in illuminating dimensions of early Chinese life that would not otherwise be accessed through other historical or archaeological materials. This provides a penetrating anthropological view into the conditions of thought in an archaic society to a degree previously unavailable.

Indeed, the Classic of Changes is a bold and powerful attempt at modeling an ancient culture in a way never before conceived sociologically, a profound auto-ethnography teaching us about the philosophical anthropology of its makers and preparing the way for further understanding of later classical texts. One must acknowledge an astonishing level of sophistication in textual structuring and draw insights from it concerning the ways a divination culture classifies and comes to terms with the fluctuating, omen-bearing historical material of individual human experience.

This book will be of interest to all those engaged in seeking philosophical anthropological understanding of culture and writing, and especially contributes to the study of cultures of antiquity and their modes of thought. Anyone interested in complex, formalized classification systems would want to consider this analysis. It sheds light upon ancient Chinese culture and is important for demonstrating methodologically grounded research on the foundational texts of its classical tradition. The results of this work will appeal to those pursuing better comprehension of the Classic of Changes, as an instance of writing under the paradigm of a divination culture, as an outstanding representative of pre-Qin cultural tradition, and as a guide for living.

*Nominated for the ICAS Book Prize

"The most empirically rigorous and interpretively challenging material that I know of right now in Yijing studies." - Denis Mair. (Read the entire review at the Cambria Press blog.)

"A real pleasure to see this book in print at last ... the book certainly opens up new vistas in Changes research and is much to be valued for that ... This is, uncompromisingly, a scholarly work for specialists [that is] astonishingly wide-ranging, its ideas deeply thought-provoking ... opens up extensive new fields for study and contemplation that one hopes he and others will continue to explore." - Fortean Times

Scott Davis is a Visiting Fellow at the International Consortium for Research in the Humanities at Friedrich-Alexander-University of Erlangen-Nuremberg, in the project on “Fate, Freedom and Prognostication: Strategies for Coping with the Future in East Asia and Europe.” He holds a PhD in social anthropology from Harvard University, an MA from Harvard University, and a BA from the Ohio State University. In addition to publishing several books and articles in Chinese on the Yi jing, he has also conducted fieldwork on spirit possession and folk therapeutics practiced by mediums in Taiwan.

Chapter 2: Spirits of the Zhou yi—An Essay on Wine

Chapter 6: Two Compositional Devices, with a Discursus on the Mie li Rite: A Discursus on How to Create Sinological Controversies, with Regard to How to Resolve Them

Chapter 7: Some Thoughts about Mountains in the Zhou Yi Textual Design

Chapter 8: Piglets, Fish: A Discursus on the Yue Rite