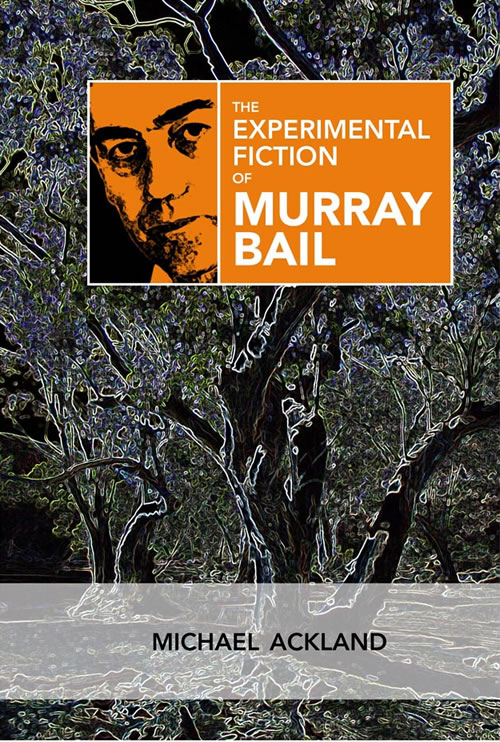 The Experimental Fiction of Murray Bail by Michael Ackland

"As Ackland leads us through Bail's formative experience and the fiction born out of those experiences, we witness the development of a major Australian talent ... Bail was long overdue for an extended study. The Experimental Fiction of Murray Bail has addressed that need with a thorough overview of this major Australian artist ... in The Experimental Fiction of Murray Bail, readers have a sound guide to the Bail oeuvre, one that should aid in reading or rereading. - JASAL

Murray Bail is one of the most boldly innovative and intellectually challenging of contemporary writers. He is widely appreciated in his homeland, Australia, but too little read beyond its shores. Bail’s major work began appearing in the 1970s, after an epochal change of government created a climate supportive of new talent and artistic experimentation. The enigmatic nature of his narratives, coupled with painfully slow composition habits, militated against the creation of a large following for his work, but established him as a writer of the most exacting standards, who measured himself against the best offered by European and American letters.

During a career spanning four decades he has produced four novels, two collections of short fiction, and diverse non-fiction. These works have been repeatedly shortlisted for national awards, with Homesickness (1980) winning the National Book Council Award and The Age Book of the Year, Holden’s Performance (1987) the Victorian Premier’s Award for Fiction, and Eucalyptus (1998) the Commonwealth Writers’ Prize and the Miles Franklin Award. Bail’s writing is also informed by a strong interest in the visual arts, which has lead him to produce essays and monographs on Australian artists, as well as to serve as a trustee on the prestigious board of the Australian National Gallery, Canberra.

Bail has never pandered to a popular readership. Early in his career he noted Flaubert’s dictum ‘Be regular and ordinary in your life, like a bourgeois, so that you can be violent and original in your books’, and he has usually operated according to this precept. Ever audacious, he set himself the goal of smashing the shackles of conventional realism to produce a unique and confronting body of work.

Although a casual reading of Bail’s work affords shocks, laughter and stimulation aplenty, it usually raises of a host of questions that nag and tantalize readers for years to come. This is a legacy of his unambiguous declaration in favour of the novel of ideas and, above all, of bold invention and risk taking. Also his individual works can seem at first sight unrelated: a novel that recounts the world-wide peregrinations of tourists through museums, real and imaged (Homesickness); its sequel in a parodic novel of education that attacks Australian parochialism (Holden’s Performance); followed by what Michael Ondaatje has called ‘one of the great and most surprising courtships in literature’ (Eucalyptus), and most recently the depiction of a failed attempt to live the life of an original thinker, which explores the rival interpretative claims of philosophy and psychology (The Pages).

This varied output, bristling with ideas and idiosyncratic speculation, calls for protracted, intelligent investigation. Unpredictable, episodic Homesickness leaves a reader feeling exhilarated by countless outlandish incidents and narrowly escaped threats, but baffled. Why, for instance, do Bail’s tourists finish in an empty museum, themselves the only observable objects, before apparently disintegrating physically? Why, too, is Holden deeply shaped by the topographical peculiarities of individual cities? Or why does Eucalyptus link obsessive, encyclopaedic knowledge of the nation’s iconic tree with winning the hand of a fair damsel? Though Bail’s work has inspired numerous critical essays and interpretations, there has been to date no attempt to explicate in depth, and interrelate, his oeuvre as a whole.

This first critical study of Murray Bail maps out the coordinates, and sheds invaluable light on, the intellectual labyrinth afforded by his novels. Its author, Michael Ackland, outlines deftly the literary and artistic heritages that influenced Bail’s early thought, then traces key preoccupations in his fiction and non-fiction, as well as provides authoritative interpretations of individual works. Equally adept in describing how painterly problems are adapted to speculative fiction, or in foregrounding the role played by diverse heritages of Western philosophy and science, Ackland explores the layered depths, conceits and lightning interplays that inform individual scenes, and reveals the Australian writer’s immense ambitions. This study demonstrates Bail’s work to be as contemporary as postmodernism, yet timeless in its probing of the human condition, and of what individuals may achieve in a world subject to both global forces and mutability.

This is an important book for all literature, cultural studies, and Australasian collections.

"As Ackland leads us through Bail's formative experience and the fiction born out of those experiences, we witness the development of a major Australian talent ... Bail was long overdue for an extended study. The Experimental Fiction of Murray Bail has addressed that need with a thorough overview of this major Australian artist ... in The Experimental Fiction of Murray Bail, readers have a sound guide to the Bail oeuvre, one that should aid in reading or rereading. - JASAL

Michael Ackland holds the Colin and Margaret Roderick Chair of English at James Cook University, Townsville, Australia, and is Executive Director of the Foundation for Australian Literary Studies. He holds a PhD from the Australian National University and a BA from Monash University. He has held a Chair of Australian Studies at Tokyo University, been a Visiting Scholar at Columbia University and a Fulbright Fellow at Louisiana State University. He is a Fellow of the Australian Academy of the Humanities and a Senior Fellow of the Cairns Institute. His previous publications include The Penguin Book of Nineteenth Century Australian Literature (1993), That Shining Band: A Study of Australian Colonial Verse Tradition (1994), Henry Kendall: The Man and the Myths (1995), Damaged Men: The Precarious Lives of James McAuley and Harold Stewart (2001) and Henry Handel Richardson: A Life (2004).

Chapter 1: Enamoured with Art and Ideas: The Early Bail

Chapter 2: Inside the Maze: Homesickness

Chapter 4: Life Classes with the Master: Eucalyptus and The Pages