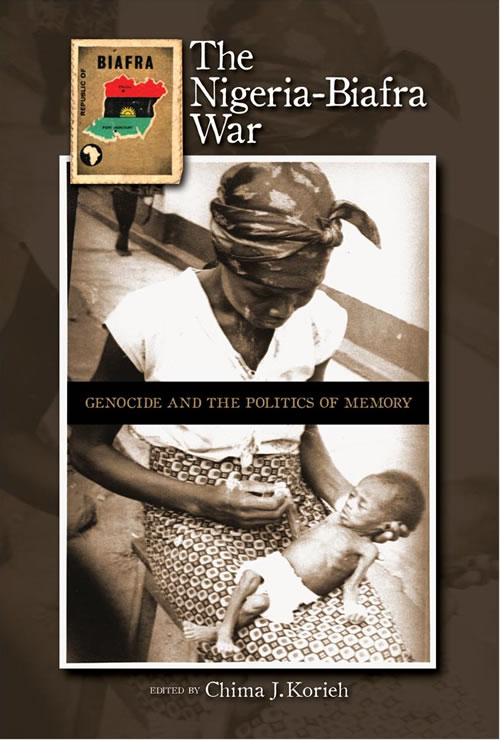 The Nigeria-Biafra War: Genocide and the Politics of Memory by Chima Korieh

"Korieh’s research disclosed hard documentary evidence showing the names of notable Hausa-Fulani personalities and even British expatriates who played prominent roles in the May–June 1966 pogrom of the Igbo in the north of Nigeria ... Worthy and invaluable." - Journal of Asian and African Studies

On December 15, 1968, the American Jewish Congress issued a memorandum titled “The Tragedy of Biafra.” Phil Baum, director of the Commission on International Affairs of Congress, called attention the humanitarian tragedy going on in Biafra: “For more than a year, a little noticed but nonetheless savage and tragic war has been going on between the Federal Government of Nigeria and the former Eastern Region of that country which, in May 1967, proclaimed its independence as the Republic of Biafra.”

Up till then, the war drew little public attention despite the fact that it was “already responsible for more deaths than have occurred in Vietnam and is now causing the death of thousands of people each day through starvation.” By this time the brutal war between federal Nigeria and secessionist Republic of Biafra had lasted for nearly one year. The thirty-month-long war led to the death of over one million ethnic Igbos and other Easterners. Described as the first black-on-black genocide in postcolonial Africa, the war had a terrible impact on the Igbo people with its massive civilian death toll.

There has been much written on the Nigeria-Biafra War. It was the most reported conflict in contemporary African literature until the recent genocide in Rwanda. Much has been written about the Nigeria-Biafra War, and most of what has been written from within Nigeria is dominated by the accounts of the major actors and generals who conducted the war. Little, however, has been done on the genocidal aspect of the war against the Biafra side.

Despite the evidence that there were meticulously planned and implemented political project of exterminating the Igbo ethnic group in Northern Nigeria before the war and in other parts of Nigeria during the war, the genocide has been mischaracterized as a civil war. In what can be called “an invisible genocide,” the Igbo genocide was masked by the attempts by both federal Nigeria and major western nations to down play the evidence of the genocide perpetrated against the Igbo ethnic group as well as its deeper roots in the pre-civil war period. In addition, little empirically grounded work has been done. Especially missing is work from the perspective of ordinary people who experienced the war as combatants or civilians.

Through careful analysis of the experiences of those who witnessed the war and other sources, this book reveals neglected aspects of the Biafra war. The book examines the Nigeria-Biafra war from the perspective of non-military front of the war effort and the lingering human costs of that conflict. It also addresses the Biafran experience within the context and discourse on genocide. The role of humanitarian, civil or advocacy groups, international organizations and conflict resolution, the impact of the Cold War, and resources control (oil) in shaping the w and outcomes of the war are examined. This book speaks to some elements in the causes of the war and the perceived underlying genocidal rather than political motivations for the war. Lastly, the book addresses postwar conditions of the Igbo people through a historical, political, and an ideological lens, which to a greater or lesser extent forms the basis of much excellent criticism of post-civil war reconstruction, reintegration, and restoration. The critical issues addressed in this book are issues around genocidal intent, international politics, politics of memory, and the systematic attempt to “forget” the Nigeria-Biafra Civil war—the first major civil war in post-independence Africa.

This is an important book for collections in African studies, international studies, history, and political science.

"Korieh’s research disclosed hard documentary evidence showing the names of notable Hausa-Fulani personalities and even British expatriates who played prominent roles in the May–June 1966 pogrom of the Igbo in the north of Nigeria ... Worthy and invaluable." - Journal of Asian and African Studies

1. Getting the Terminology Right: Revisiting the Question of Genocide, Ethnic Cleansing and Crimes against Humanity in Biafra—Paul R. Bartrop

3. Starvation and Relief Operations in the Nigeria-Biafra War—Mary-Noelle Ethel Ezeh

5. Biafra in Retrospect: The Role of the International Community and Ethico-political Implications—Tobe Nnamani

7. The Nigeria-Biafra Civil War and the Politics of Memory–Emeka Xris Obiezu

8. The Ordeal of a Biafran Refugee –Ada Uzoamaka Azodo

9. Dangerous Memory: The Nigeria-Biafra Civil War, the Post-War Generation, and a Legacy of Frustration–Augustine Duru

11. Lessons from Biafra: The Structuration of Socially Relevant Science in the Research and Production Directorate—Chikwendu Christian Ukaegbu