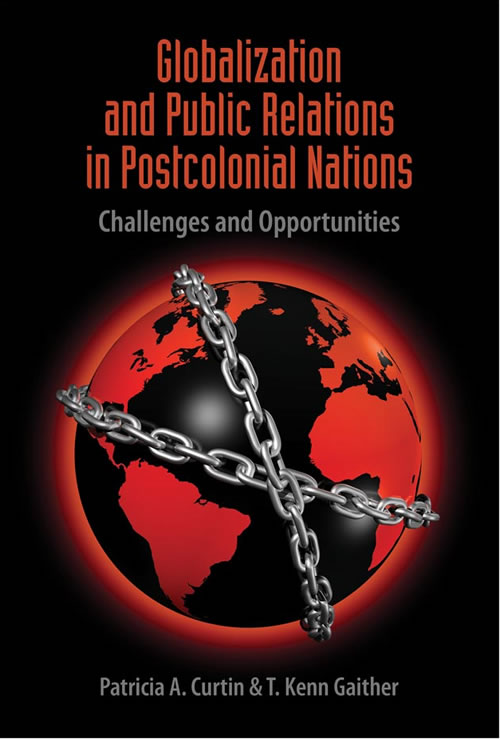 Globalization and Public Relations in Postcolonial Nations: Challenges and Opportunities by Patricia A. Curtin and T. Kenn Gaither

As the debate over the benefits of globalization continues unabated, there is a need for public relations scholarship to engage in that debate by challenging existing paradigms and theories. This book outlines not only a wide ranging set of issues raised by globalization in postcolonial nations, it ties those issues to public relations campaigns that are both alleviating and exacerbating those issues.

The promise of globalization remains illusory for millions of people early in the 21st century. While it has lifted many out of poverty and fueled a growing middle class, it has also contributed to growing socioeconomic inequities. This book focuses on how globalization has affected those who live in postcolonial nations, particularly in terms of economic inequities, nation branding and identity, world health, environment and sustainability, agriculture, technology, labor, and human trafficking.

Against this backdrop, the authors examine how and when public relations practices, whether sponsored by governments, corporations, not-for-profits, activist groups, or other organizations, are contributing to the discourses surrounding the policies and practices that address these issues. Public relations finds itself in a critical juncture as it looks for new models that take into account the complexities of globalization and the voices of those denied access to established power structures.

By concentrating on issues in postcolonial nations, the authors decenter western notions of public relations practice and embrace the cultures, economies, and political structures that have been profoundly influenced by the legacy of colonialism. Instead, the authors conceptualize public relations as a communicative and relationship-building practice that can bridge the political- and cultural-economic spheres of globalization, recasting practice as a central tenet of a global social justice agenda.

The purpose of this study is to examine critically how public relations is shaping globalization efforts and practices in countries that have historically experienced western control. The study aims to document those practices to solidify a commitment to participatory public relations that alleviates serious social issues and inequities.

This book seeks to answer these questions by critically examining public relations as a truly international practice that stretches beyond corporate-driven, management-by-objective approaches into a richer perspective encompassing cultural, economic, political, and historical considerations. While a significant body of public relations scholarship embraces the tenets of neoliberal economics, the authors use a case study approach focused on specific issues raised by globalization to suggest that public relations practice contributes to social justice only when it is recast as a participatory communicative practice.

As the debate over the benefits of globalization continues unabated, there is a need for public relations scholarship to engage in that debate by challenging existing paradigms and theories. Public relations scholarship that takes into account the perspectives of a broad global audience has become imperative. This book outlines not only a wide ranging set of issues raised by globalization in postcolonial nations, it ties those issues to public relations campaigns that are both alleviating and exacerbating those issues. This study’s orientation rests uneasily in the spaces among global disparities, discourses of colonization, and public relations practices. It highlights the need for continuing theoretical development that embraces both structural constraints and situational contexts, delineating the central role that public relations plays in defining social justice issues.