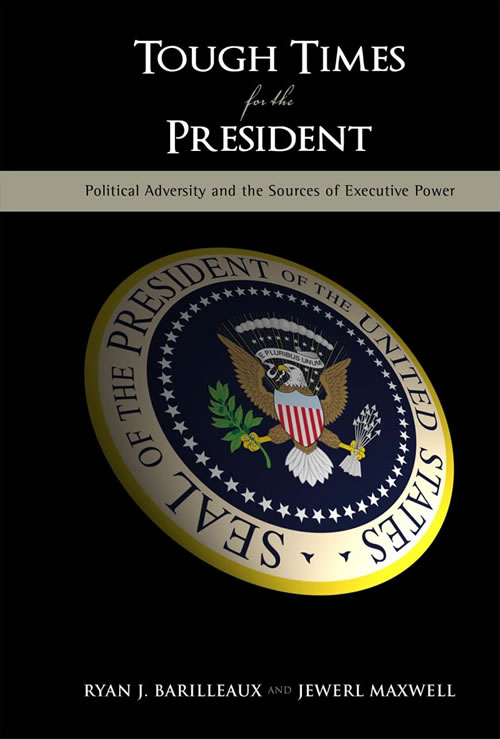 Tough Times for the President: Political Adversity and the Sources of Executive Power by Ryan J. Barilleaux and Jewerl Maxwell

“A fascinating, challenging, and important book. It looks at presidents in trouble, and the authors rightly claim that presidents are in trouble more often than they are in good times. … Barilleaux and Maxwell examine how presidents respond to tough times and what strategies they might employ to govern under such difficult and common circumstances. … Barilleaux and Maxwell have given presidency scholars much to chew on. … given the frequency of tough times, it behooves a president to explore the alternative approaches to governing outlined in this book.” – Presidential Studies Quarterly

As Barack Obama neared the end of his second year in office, his political future was in doubt. His job approval ratings had fallen below fifty percent. In the 2010 congressional midterm elections, voters gave Republicans a sizable majority in the House and narrowed the Democrats’ majority in the Senate. Independent voters, who had been so important to Obama’s 2008 victory, abandoned the president and Democratic candidates. Observers began to speculate on whether the president could win reelection in 2012. Unemployment remained high, the economy was still weak, and the president’s conduct of the wars in Iraq and Afghanistan seemed to satisfy neither his antiwar base nor his conservative critics. The euphoria of Election Night 2008 was gone; in the words of one scholar, 2010 was “the great repudiation” of Barack Obama.

Mr. Obama’s situation is not that unusual for American presidents. Even a cursory glance at the office in modern times reveals that presidents rarely enjoy the sort of strong support that Americans associate with “heroic” presidents. Popular presidents such as FDR and Reagan encountered difficulties. In fact, every president since World War II—except John F. Kennedy—experienced at least one period of political adversity. Nevertheless, the way the presidency is thought of tends to focus on great expectations of what they can accomplish, not the more workaday political challenges that most presidents face. Furthermore, even less attention is paid to those situations in which presidents encounter situations of political adversity that make all efforts at governing difficult, even if any incumbent is more likely to experience tough times rather than grand achievements.

What is known about the difficulties presidents face and what can be learnt by examining situations of presidential adversity? How do presidents respond to such situations, and how do adverse circumstances both limit incumbents and stimulate them to be innovative or creative in their actions? This book explores presidents in “tough times,” a situation that has been generally overlooked by students of the presidency fascinated with the heroic presidents of history. It covers ten presidents—from Truman through George W. Bush—in eleven situations of political adversity.

This study of presidential adversity illuminates the fundamental sources of executive power—executive actions, foreign policy initiatives, organizational changes, going public, and unconventional actions—that form a foundation for the persuasive influence that many see as the epitome of presidential leadership. It also shows how presidents cope with the kinds of tough circumstances in which chief executives find themselves all too often.

The case studies show American chief executives facing some of the toughest political situations of their presidencies, and illuminates important episodes in modern political history. The authors show Gerald Ford trying to govern without any of the traditional sources of political capital, Bill Clinton recovering from two near-death political experiences (the loss of Congress in 1994, then the Lewinsky scandal), and the unraveling of the George W. Bush presidency.

The authors also use these insights to help build an alternative understanding of presidential power. The authors’ cases of presidents in tough times leads to a new view of presidential power as situational leverage. They sketch an understanding of power as leverage that takes into account the resources that a president is able to apply in a particular situation, weighed against the risks and obstacles that threaten to undermine presidential goals and the opportunities that help to motivate the president. This approach presents a more accurate, realistic, and useful view of presidential power than Richard Neustadt’s catchy but misleading “power to persuade.” Moreover, viewing power as leverage helps to account for why recent presidents have devoted time and attention to employing and expanding their capacity for unilateral action.

Tough Times for the President is a unique book because it provides a different perspective on America’s most important office. Most books on the presidency focus on issues of presidential leadership, presidential greatness, or influence over policy, but none compares how presidents have responded to the political challenges confronting them.

This book is appropriate for upper-division undergraduate students, graduate students, faculty, and informed general readers who are interested in the American presidency. It presents a different view of presidential power from one with which all of these audiences are familiar (that presidential power, according to Richard Neustadt’s Presidential Power, is the “power to persuade”). It offers to all readers interested in the nation’s highest office a different way to think about power in the White House.

“A fascinating, challenging, and important book. It looks at presidents in trouble, and the authors rightly claim that presidents are in trouble more often than they are in good times. … Barilleaux and Maxwell examine how presidents respond to tough times and what strategies they might employ to govern under such difficult and common circumstances. … Barilleaux and Maxwell have given presidency scholars much to chew on. … given the frequency of tough times, it behooves a president to explore the alternative approaches to governing outlined in this book.” – Presidential Studies Quarterly

“This is the perfect book for our times. Enough hero worship and media pandering about mere mortals in the White House. The Framers of our Constitution understood how virtue, or character, was shaped by political adversity. Given that most presidents suffer more adversity than greatness, these richly detailed case studies of nine modern presidents since Truman argue forcefully that adversity can become an opportunity for leadership through ‘situational leverage’ if—but only if—unilateral presidential power is employed rather than the mythical power to persuade as devotees of Richard Neustadt maintain. Tough Times for the President is absolutely essential reading not only for presidency scholars but anyone intrigued by the exercise of presidential power.” – Raymond Tatalovich, Professor of Political Science, Loyola University Chicago

“For modern presidents, non-action is not an option. Barilleaux and Maxwell demonstrate how presidents experiencing tough times react and innovate in order to stay relevant in the making of public policy. The authors' concept of ‘situational leverage’ adds much to the literature on presidential power by helping us to stop treating all presidents as equal and all situations as amenable to the same tactics and strategies. Tough Times for the Presidentgoes far in correcting the record in our understanding of presidential power by showing how much is thought of as the ‘Modern Presidency’ has been built by presidents attempting to govern from a position of weakness. This book will be a valuable addition to our literature on executive leadership.” – Gary L. Gregg, Mitch McConnell Chair in Leadership, University of Louisville

“I found myself actually eager to turn the page, which doesn't happen often in academic books. The authors write exceedingly well. The military studies past mistakes in presidential decision making as guides for military action, but political scientists don't often focus on the mistakes that presidents make. Tough Times for the President thus fills a gap by providing very clear case studies of how past presidential actions should be used as guides in future cases. The authors also provide an excellent analysis of why Neustadt's application of presidential power is currently acceptable: prerogative power. A well-done study!" – Shirley Anne Warshaw, Harold G. Evans Chair of Eisenhower Leadership Studies, Gettysburg College

Ryan J. Barilleaux is Paul Rejai Professor of Political Science at Miami University, Oxford, Ohio. He holds an MA and PhD from the University of Texas at Austin and a BA (summa cum laude) from the University of Southwestern Louisiana. Dr. Barilleaux is the author or editor of nine previous books, including The Post-Modern Presidency, Power and Prudence: The Presidency of George H.W. Bush, and The Unitary Executive and the Modern Presidency, as well as over thirty articles and book chapters on the presidency and other aspects of politics. He was chair of the Department of Political Science at Miami University from 2001 to 2009 and was also an aide in the United States Senate.

Chapter 2. Governing After an Unmandate

Chapter 5. Adversity and Power in the Ford Presidency