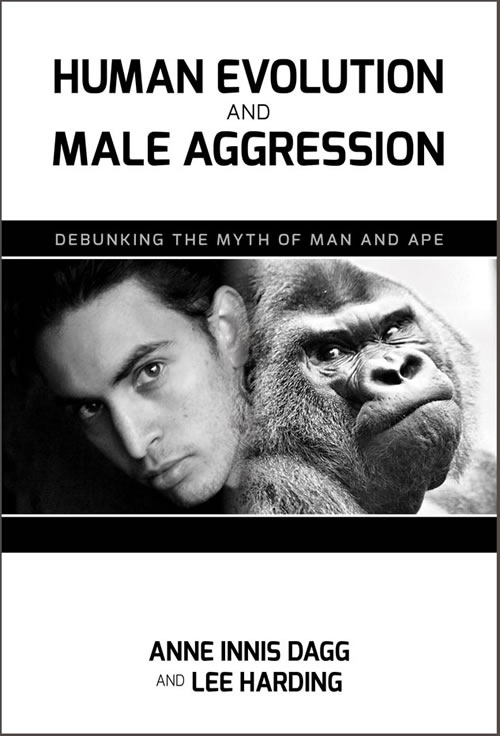 Human Evolution and Male Aggression: Debunking the Myth of Man and Ape by Anne Innis Dagg and Lee E. Harding

"Should be widely read and incorporated into both high school and university curricula because the myths they challenge are so deeply embedded in mainstream society and are perpetuated and legitimated ... an eye-opening book that will definitely change many people's thoughts about men and violence." - Literary Review of Canada

New research about human origins is so compelling that it has turned a widely accepted theory on its head. In the 1970s, the first quantifications of primate DNA showed that humans are genetically very close to chimpanzees, and primatologists were reporting infanticide and murder among chimpanzees. A plethora of popular books came out on the theme of man-the-aggressor and man-the-hunter as an explanation for aggression (some saw it as justification) in human societies. Other studies related killing and aggression in baboon society to human behavior.

A key factor in the aggressive male paradigm was observations of male infanticide by such disparate species as lions and langurs (a South Asian monkey). It led in 1974 to a new theory that males of many species, and especially male primates, habitually kill young that are not their own so that their mothers will enter estrus, giving the males more mating opportunities. In this view, there was evolutionary pressure making males more and more violent. It spread like wildfire through evolutionary biology and became a central tenet of the new field of sociobiology. Infanticide was frequently inferred when infants went missing, even for species in which it was never observed. It was invoked to explain many aspects of ecology from mating systems to resource partitioning—even for species whose biology precluded the theory’s validity. And it was captured in the popular press: males are natural-born killers.

It is now known that aggression and infanticide were overblown in other species and inapplicable to early Homo sapiens. The early humans were NOT aggressive killers. For at least four million years, they lived in small groups rearing their young and, in time, probably cooperating with other groups. As humans evolved from the very first forms of Homo sp. to modern humans, group size increased along with brain size. Living in larger communities, with knowledge of and relationships to other communities, required increasingly complex behaviors to facilitate cooperation and avoid aggression. Like earlier hominids in the human lineage, humans are capable of prospering in a wide variety of habitats, so some groups sought new homes away from their natal hearths. Thus, the human species spread from Africa throughout Asia and Europe, into the Americas and across the South Pacific Ocean in thin populations with little need to compete for resources. Over millions of years, human beings had evolved into the inventive, adventurous, and highly intelligent people that they are today.

It is only in the past 20,000 years that Homo sapiens numbers began to increase to such an extent that wandering groups came into competition with each other for food and space. Quarrels erupted and continue to this day. The archeological record of violent aggression—as exemplified, for example, by stone projectiles embedded in human bones—dates from only this period, and no earlier. This is more than 100,000 years after humans became morphologically modern and about 30,000 years after they became “behaviourally modern” with art, grammatical language, and complex societies.

Popular and scientific literature is still permeated with male aggression as a product of long evolution. The fact that violent aggression appears in the archeological records less than half as long ago as artistic expression should give pause to any student of human behavior. Humans are nothing like apes--chimpanzees, bonobos, gorillas, or orangutans which developed their mating systems independently from humans, and from each other. Chimpanzees have a promiscuous mating system, bonobos are completely hedonistic, gorillas have a harem system, and orangutans are essentially solitary. In those species, males may compete with each other, so aggression can occur. Gibbons would be a better model for human behavior because they live in nuclear families (several ages of dependant offspring living with adults for many years) and are never aggressive toward each other. Nuclear families are intimately tied to peaceful living because, once established, there is no need for aggression, except for defence of territory against outsiders. Although male aggression is a sad fact of modern society, factors other than genetic heritage should be examined to explain this.

This book reviews the recent advances in the knowledge of human evolution that have greatly changed our conceptions. It has been uncovered that humans are nothing like chimpanzees, and far less like baboons. Early humans never knuckle-walked, left the jungle for the savannah where they roamed widely in dispersed populations, and for more than four million years lived in small groups or relatively peaceable societies with fathers raising children and joining with other adult males for community projects.

Human Evolution and Male Aggression dispels misconceptions based on flawed interpretations of biology and behavior. It tells the compelling story of the human male’s peaceful past. It summarizes recent advances in understanding of bones, brains, hormones, and genetics that reveals humans for who they are. In reviewing the behavior of other primate males and their relationship to females and infants, it sets the stage for a new paradigm of male behaviour––one in which aggression, though possible, is suppressed most of the time in favor of affiliative behaviors that benefit females, infants, and society as a whole. Encompassing topics relevant to biological and social sciences, this book will be of interest to students of primatology, evolutionary biology, anthropology, and human behaviour.

"Should be widely read and incorporated into both high school and university curricula because the myths they challenge are so deeply embedded in mainstream society and are perpetuated and legitimated ... an eye-opening book that will definitely change many people's thoughts about men and violence. It is also an important bridge between academic disciplines ...and will assist social scientists in their quest to motivate political and economic elites to effectively address the ways in which the current political economic order contributes to brutal male aggression." - Walter S. DeKeseredy, Anna Deane Carlson Endowed Chair of Social Sciences, West Virginia University, for Literary Review of Canada

“A great deal of popular and scientific literature today is presenting a distorted view of humans, and especially human males, as being inherently aggressive and even murderous. In this book, Dagg and Harding provide ample evidence from biology and anthropology that this is a highly biased view of human nature. They show that the facts of evolutionary history and ethnology, starting with the vastly maligned monkeys and apes, contradict to a startling degree today's tendency to downgrade and reduce Homo sapiens and also ignore the fact that throughout their evolutionary history, humans, both males and females, have lived mainly in cooperative, peaceful societies.” –Robert Wald Sussman, Professor of Physical Anthropology Department of Anthropology, Washington University in St. Louis

“Dagg and Harding have assembled a large body of information addressing the issue of whether male aggressive behaviors were the norm during human evolution, as is commonly believed. They come down firmly and convincingly on the side of peacefulness and cooperation, and not violence, as the hallmarks of human evolution. Their conclusions are generated by presenting, in detail, topics that range from male researcher biases to extremely thorough analyses of primate social behaviors. They have written a book that is laden with refreshing earnestness and one that somewhat aggressively argues their viewpoint. All in all, this book is a provocative and an intellectually stimulating read.” – Jack J. Pasternak, Professor Emeritus, Department of Biology, University Of Waterloo

Anne Innis Dagg is a faculty member in the Independent Studies program at the University of Waterloo. She holds a PhD from that university, and a BA and MA from the University of Toronto. Dr. Dagg has published over 60 refereed papers related to animal behavior and bias in academia. Her recent books include Love of Shopping is Not a Gene: Problems with Darwinian Psychology, Pursuing Giraffe, The Social Behavior of Older Animals, and Animal Friendships.

Lee E. Harding is an environmental consultant with a PhD in Wildlife Toxicology from Gifu University (Japan) and a BSc in Wildlife Management from Humboldt State University (California). Dr. Harding is a Registered Professional Biologist (R.P.Bio.) in British Columbia, Canada. As an environmental consultant during 1972-1976, he studied wildlife ecology in forest and tundra ecosystems throughout northern and western Canada. In 1976 he joined Environment Canada to manage pollution assessment programs, first in Alberta and Northwest Territories and then in British Columbia. From 1994 to 1997 he managed the Wildlife Toxics group at the Canadian Wildlife Service in Delta, BC. In 1998 he returned to environmental consulting, studying wildlife in many parts of the world. In his spare time, he writes on toxicology and conservation biology of endangered species with a recent focus on primates in Southeast Asia.

Section I Primate Biology and Behavior

Chapter 1 Where We are Going

Chapter 2 Who Are We

Chapter 4 Our Closest Cousins –Not That Fierce

Chapter 8 Males and Females, Without the Sex

Chapter 10 The Fallacy of Male Infanticide

Chapter 11Infanticide by Females – Too Common