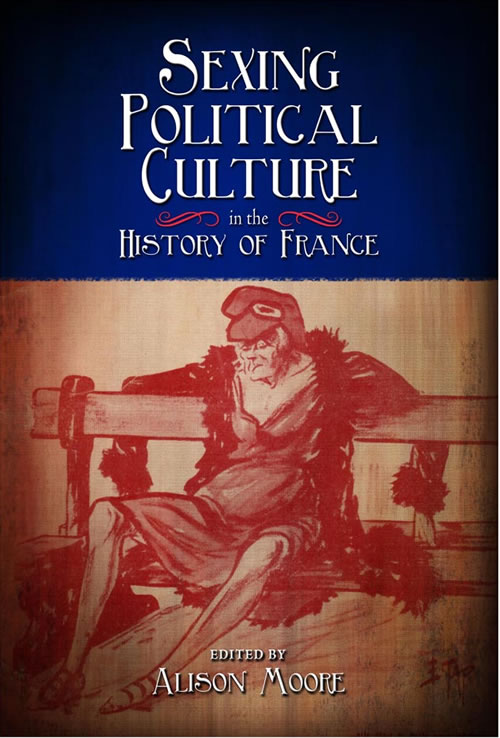 Sexing Political Culture in the History of France by Alison M. Moore

"Provides an insightful overview of the kind of scholarship of gender and sexuality that has emerged in the last decade, and stands as an invaluable resource for historians." – Canadian Journal of History

Gender and sexual imagery have played uniquely symbolic roles in the modern French history of politics, religious struggle, and nationalism. That role is particularly obvious at the beginning of the twenty-first century, with Islamic head-scarves occupying public debates, while the feminine head of the national icon Marianne still adorns the centre of the République Française logo, and female political representatives remain in sharp minority.

Not only in France but in numerous global cultures, modern nationalist ideologies have referenced gendered and sexual motifs in order to seduce, provoke and embed their political and social values in the population, or in order to inflame animosity toward competing nations and ideological enemies. Among them all France has most consistently placed gendered and sexual metaphors at the center of its political culture. France may have provided the prototype for the tendency toward gendered and sexualized imagery in European nationalisms of the nineteenth century, considering the politically influential nature of the first French republican experiment of 1789 and how widely its values were exported throughout Europe during the Napoleonic invasions. The mechanisms of transmission included both direct export and reactive competition, resulting in archetypes of the nation as a woman in Britain, Italy, Germany, Russia, and other countries whether Napoleon had planted a flag there or not. Indeed, the recurring Franco-Germanic conflict has often been the site of intense generation of gendered and sexualized images of the nation in both cultures, as several of the chapters in this volume demonstrate.

For gender and sexuality historians of France, it is obvious that complex layers of historical meaning are embedded in present-day anxieties about religion, women and the secular state. Indeed feminine icons, masculine ideals, sexual perversions and norms, women’s heads and gendered metaphors have been a feature of French political culture since the Middle Ages. Reflecting on the continuities and distinctions between these recurrent forms of preoccupation provides important clues to how and why such imagery continues to be inscribed within divisive contests over nationhood, ideology and identity.

This is not a book about the history of women, gender, or the history of sex per se, nor even about the history of sexuality in its narrower discursive sense, but is instead a study of the history of the particular uses to which gendered and sexual symbols have been put in the service of the nation, the republic, the revolution, religion, progress, race, colonialism, secularism, and the state. The genealogies traced here proliferated diffusely across state discourses, propaganda, and popular media, through historical precedence and cultural habit. The approaches employed to tease out their salience and examine their emergence and transmission are necessarily grounded in a diverse range of disciplinary approaches - political, cultural, social, and intellectual history, cinematic reading and contemporary feminist political analysis.

To invoke gender or sexual desire, perversion or difference, is to suggest something of our bodily experience, of our intimate relationships, of our parental imagos, and of our inner longings. Thus it gives the state, ideological communities or social elites the power to reach into popular imagination and activate symbols that will engage others in collective agendas––even those which may stand against their own particular social interests. That strategy became marked in times of nation-building and especially in times of war during the nineteenth and twentieth centuries, but it pre-dated the modern nation state, as the copious evidence of sexual and gender discourse in religions of the medieval and early modern era suggests.

This edited volume is essential reading for scholars and students of the history of political culture, nationalism, gender and sexuality, the history of France or feminist studies.

“Alison Moore's sparkling collection of essays offers a host of fascinating perspectives on gender in French politics from the European witch-craze through to the current head-scarf controversy.” – Colin Jones, Professor of History, Queen Mary University of London

"Sexing Political Culture in the History of France gathers together several compelling essays that nuance older studies about how gender and sexual symbols stand in for the nation in its various incarnations from the Early Modern period to the present. By combining a long historical trajectory with detailed analyses of how the state or its opponents have used symbolic meaning to mobilize political action, clarify or criticize hierarchy, or simply make sense of social norms, these essays demonstrate the distinctive power of such symbolism and thus of this area of focus, which traverses intellectual, social, cultural history as well as the history of gender and sexuality. This is a cutting-edge collection that moves coherently from the early modern witch hunt to race in postcolonial France." – Carolyn J. Dean, John Hay Professor of International Studies, Brown University

“Sexing Political Culture in the History of France marks a genuinely new departure in European history of sexuality studies. Alison Moore has gathered together contributions which demonstrate the manifold ways in which the language of gendered and sexualized stereotypes, behaviors, and practices has been deployed in the service of patriotic propaganda and the othering energies of nationalism in the French context. Further, she urges a nuanced focus on the fact that scholars too have embraced the tendency to metaphorize national, religious and political situations using sexual and gendered symbols. As such, the book also stands as a meditation on the political and libidinal character of historiography itself. The essays collected together in the volume cover a broad historical span and treat a wide-ranging array of fascinating topics from sixteenth- and seventeenth-century witch-hunts to historically recent debates about French secularism, Islamophobia, and the wearing of the veil. This book is a must-read for all students and scholars of French and European studies, gender and sexuality studies, and the history of ideas.” – Lisa Downing, Professor of French Discourses of Sexuality, University of Birmingham

Alison M. Moore is a senior lecturer in modern European history at the University of Western Sydney. She holds a PhD and a BA Honours Class 1 with medal from the University of Sydney. Her previous publications include (with Peter Cryle) Frigidity: An Intellectual History (Basingstoke: Palgrave, 2011), and articles in peer-reviewed journals such as the Journal of the History of Sexuality, Gender and History, Angelaki, Sexualities, Psychology and Sexuality, French Cultural Studies, and Australian Feminist Studies.

Christine Bard is a professor of contemporary history in the Centre for Historical Research of the West, and in the Sciences Po Centre for History at the University of Angers. She works on political, social and cultural history of women and gender. Among her works are Les Filles de Marianne (Fayard, 2005); Les Garçonnes (Fayard, 1999); Les Femmes dans la société française au vingtième siècle (Armand Colin, 2001); Ce que soulève la jupe (Autrement, 2010); Une Histoire politique du Pantalon (Editions du Seuil, 2010); and Le Féminisme, au-delà des idées recues (forthcoming). She is president of the association Archives du feminism and is director of the University of Rennes publishing house Sciences Humaines Confluences.

Katherine Crawford is a professor of history at Vanderbilt University. She is interested in the ways that gender informs sexual practice, ideology, and identity, both in normative and non-normative formations. She is currently exploring the relationship of gender to the polemics in the French Wars of Religion. Her most recent book is The Sexual Culture of the French Renaissance (Cambridge University Press, 2010).

Yasmine Debarge is a PhD student in social sciences at the Ecole Normale Supérieure of Cachan, affiliated to the Institut des Sciences Sociales du Politique. Her thesis compares state parental-child access services in France and in Hungary. From 2007 until 2009, she was a guest researcher at the Institute of Sociology of Budapest and a member of the Hungarian Academy of Sciences. She received a Master degree in Anthropology from the École des Hautes Études en Sciences Sociales.

Marie-Paule Ha is an associate professor the History Department at the University of Hong Kong. She is the author of Figuring the East: Segalen, Malraux, Duras, and Barthes (State University of New York Press, 1999). She has recently re-edited the works of two French colonial women writers, Christiane Fournier, Homme jaune et femme blanche (L'Harmattan, 2012); and Clotilde Chivas-Baron, La Femme française aux colonies suivi de contes et Légendes de l’Annam (L'Harmattan, 2009). She has published in journals such as Signs: Journal of Women in Culture and Society and French Colonial History. She is currently completing a book for Oxford University Press on the history of French women and the empire using Indochina as a case study.

Mark Meyers is an associate professor of history at the University of Saskatchewan and editor of the Canadian Journal of History/Annales canadiennes d’histoire. He holds a PhD from Brown University, an MA from the University of North Carolina at Chapel Hill, and a BA (hons) from Northwestern University. He also studied French literature and philosophy at the Université Sorbonne Nouvelle (Paris III). His work has appeared in journals such as French Historical Studies, Sartre Studies International, and the Journal of the Canadian Historical Association. He is currently writing a book on mass culture and the emergence of early French postmodernism

Paul Schue holds a doctorate in European History from the University of California, Irvine, and is an associate professor of history at Northland College. Articles of his have appeared in French Historical Studies, The Intellectual History Review, and National Identities, and he contributed a chapter to France and Its Spaces of War: Experience, Memory, Image, edited by Patricia M. E. Lorcin and Daniel Brewer (Palgrave, 2009).

Maryse Simon is an associate faculty member of the University of Strasbourg where she teaches early modern history. She holds a doctorate in history of religions, and was a researcher at the University of Oxford (2004–2008) as a fellow of the Marie Curie Actions from the European Commission. Dr Simon’s books include Sorcellerie savant et mentalités populaires (Presses Universitaires de Strasbourg, forthcoming) and Les affaires de sorcellerie dans le val de Lièpvre (Publications de la Société Savante, 2006). Her articles have appeared in journals such as French History, Food and History, the Revue des Sciences Sociales, and Histoire et Sociétés Rurales.

Guillaume de Syon teaches history at Albright College in Reading, Pennsylvania, and is a Visiting Scholar in history at Franklin & Marshall College, Lancaster, PA. He is the author of Zeppelin! Germany and the Airship, 1900–1939 (Johns Hopkins, 2002) and other publications examining the intersection of culture and technology, notably in the realm of popular arts (postcards) and comics. Earlier publications related to this volume’s theme include “Engines of Emancipation? Women’s Flying Clubs before World War II,” in B. Waibel and H. Vogel, eds., Die Schwestern des Ikarus: Frau und Flug (Jonas Verlag, 2004).

Fabrice Virgili is a senior research fellow at the CNRS (IRICE-Université de Paris-1-Panthéon-Sorbonne). His research is currently focused on the history of gender and war. He has published in English: Shorn Women: Gender and Punishment in Liberation France (Berg, 2002); “Enfants de Boches : The War Children of France”, in Kjersti Ericsson and Eva Simonsen (eds), Children of World War II: The Hidden Enemy Legacy (Berg, 2005). He has edited with Raphaëlle Branche, Rape in Wartime: A History to Be Written (Palgrave, 2012).

Bronwyn Winter works in the Department of French Studies at the University of Sydney, where she teaches in areas that range from postcolonial, transnational and European studies to French politics, literature and intellectual and social history. Her publications include Hijab and the Republic: Uncovering the French Headscarf Debate (Syracuse University Press, 2008), and the international anthology September 11, 2001: Feminist Perspectives (Hawthorne and Winter eds, Spinifex, 2002). She is also on the international editorial board of Encyclopedia of Gender and Sexuality Studies, ed. N. Naples et al, to be published by Wiley-Blackwell from 2013.