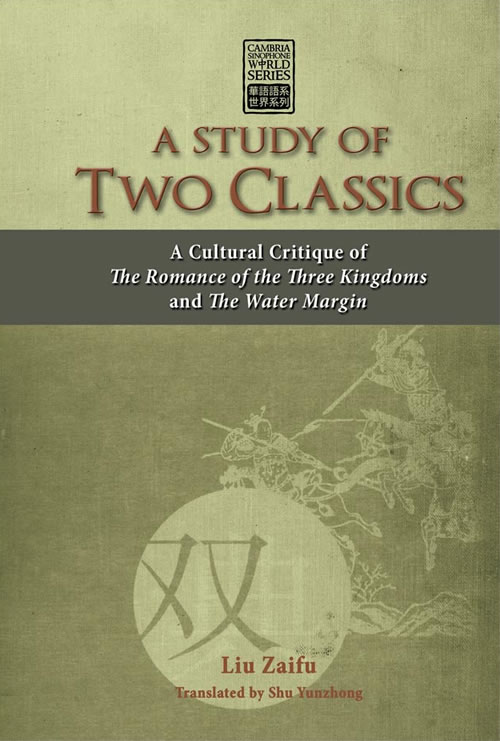 A Study of Two Classics: A Cultural Critique of The Romance of the Three Kingdoms and The Water Margin by Liu Zaifu

This is the first book that focuses exclusively on the cultural values of the two classics in Chinese literature. Liu Zaifu, the renowned Chinese critic, also examines how traditional commentators like Jin Shengtan and Li Zhi promoted the cultural values embedded in the two classics and how these harmful values are received and reinforced in contemporary China. He draws inspiration from May Fourth intellectuals, particularly Lu Xun, and from a wide range of works by Western scholars.

Ever since they were written in the fourteenth century, The Romance of the Three Kingdoms and The Water Margin have been considered masterpieces of traditional Chinese fiction. People from different social strata have read them and remembered their stories and characters.

Since the early twentieth century, Chinese critics have regarded them as part and parcel of their country’s literary heritage, offering largely positive artistic assessments even as they criticize their feudal elements. In contemporary China the popularity of the two novels has made them logical choices for adaptation, resulting, for example, in a large number of films and TV dramas based on episodes in the two novels. Given their importance in traditional Chinese literature, these two classics have garnered a tremendous amount of critical attention from scholars. However, nearly all critics have treated them as literary works, failing to explore, in a concentrated manner, their cultural values even as they acknowledge their widespread social influence.

This book is not a work of literary criticism in the conventional sense. Rather, it is a cultural/ideological critique. Liu Zaifu’s interest lies not in the artistry of the two novels but in the cultural values they reflect and spread. In summing up the worship of violence as the ideal in The Water Margin and the worship of trickery as the ideal in The Romance of the Three Kingdoms, Liu Zaifu uses the two novels as windows to look into certain unhealthy aspects of Chinese culture, linking the novels’ enduring popularity and social impact to the Chinese national character. Liu also contrasts the two novels with other classics, such as The Classic of Mountains and Seas and The Dream of the Red Chamber, to demonstrate the multiplicity of Chinese culture. As he calls the two classics into question, he continues to carry the May Fourth critical spirit in contemporary China and expands the scope of cultural criticism.

A Study of Two Classics is the first book that focuses exclusively on the cultural values of the two classics. In addition, Liu Zaifu examines how traditional commentators like Jin Shengtan and Li Zhi promoted the cultural values embedded in the two classics and how these harmful values are received and reinforced in contemporary China. He draws inspiration from May Fourth intellectuals, particularly Lu Xun, and from a wide range of works by Western scholars. For instance, he uses Oswald Spengler’s notion of “pseudomorphosis” to explain the degeneration and falsification of certain values in Chinese culture. As he engages in cultural comparison either implicitly or explicitly he also asks questions about modernity and modernization. Liu’s style is essayistic, which allows him to bring both erudition and personal observation into play. Originally written for a Chinese audience, this highly anticipated translated work will help English-speaking readers understand the issues a leading contemporary Chinese critic tries to address.

This is a critical book for scholars and students in Asian studies and literature.

Shu Yunzhong is Associate Professor of Chinese at Queens College, City University of New York. He holds a PhD in Chinese literature from Columbia University. His publications include articles on contemporary Chinese fiction, China's image in Victorian literature, and the Chinese influence on contemporary American poets, Kenneth Rexroth and Gary Snyder.

Foreword by Lin Gang: Reflections in Front of the Gates of Hell

Part One A Critique of The Water Margin

Chapter 1: A Critique of the Social Justification for Rebellion— Questions about Specific Stories in The Water Margin

Chapter 2: A Critique of the Political Justification for Rebellion— Questions about a Fundamental Theme in The Water Margin

Chapter 3: A Critique of the Implicit Condemnation of Desire

Chapter 4: Two Phenomena of the Joy of Killing

Chapter 5: Light in Hell in The Water Margin—A Reevaluation of Song Jiang

Chapter 9: Falsification of History—Sources of the Three Principles in Political Struggles

Chapter 10: Degeneration of Beauty—A Critique of the Objectification of Women in the Two Classics

One Hundred Notes on the Two Classics