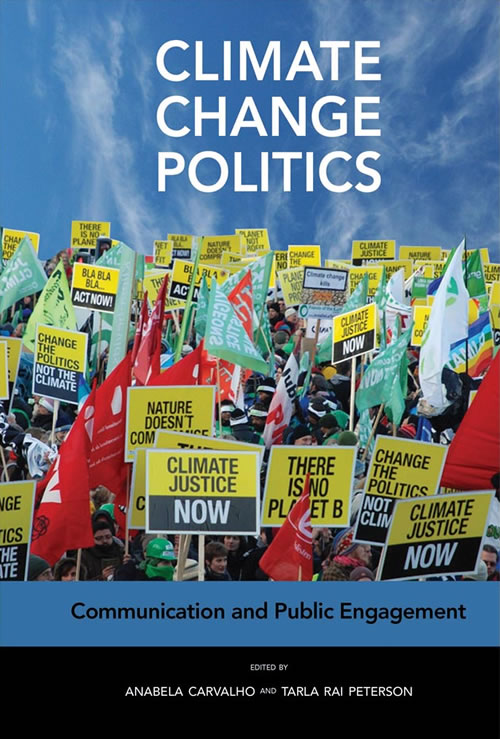 “This book is a major contribution to the field of climate communications ... Through their focus on both theoretical models and the demonstration of these approaches in a series of case studies, Carvalho and Peterson have initiated a new and extremely fruitful line of work that communications scholars need to build upon.” – Robert J. Brulle, Drexel University and Stanford University

The transformations that are needed to respond to climate change require widespread political engagement as decisions need to be made in democratic ways that are simultaneously inclusive and sustainable. Despite widespread political rhetoric in favor of public participation in environmental issues, spaces for citizen involvement have been limited and very narrow. As the world teeters on the edge of irreversible climate damage, there is a sense of disillusionment, disconnection, and powerlessness. Still, and despite politically influential actors attempting to downplay its significance, society has found climate change impossible to ignore and the last few years saw the emergence of a variety of social movements and non-governmental organizations focusing on this issue. In a rapidly changing communication environment, people have imagined and created new political possibilities through conventional and new media, as well as face-to-face communication.

Working from the premise that communicative practices provide the basis for broad public engagement, this book identifies and examines how the possibilities entailed in that engagement may yet contribute to a transformation of climate change politics that empowers both individual political subjects and their communities.

“This book is a major contribution to the field of climate communications. Through its use of the perspective of agnostic pluralism, it opens up a new approach to the now stale psychological reductionism that is predominant in climate communications. Through their focus on both theoretical models and the demonstration of these approaches in a series of case studies, Carvalho and Peterson have initiated a new and extremely fruitful line of work that communications scholars need to build upon.” – Robert J. Brulle, Drexel University

“Carvalho and Peterson’s edited book examines the cultural and political dynamics of how ‘climate actions’ are formed, mandated and enacted. This welcome collection of critical scholarship further unravels the naïve belief that political action follows knowledge, that more (consensual) climate change science leads to clearer and easier climate policy. Case studies drawn from around the world offer evidence of a counterargument: that by re-expressing the terms of political confrontation in society the idea of climate change can, and perhaps should, revitalise moribund democracies.” – Mike Hulme, University of Cambridge

“Intervening just at the right time, this volume successfully retrieves needed dynamism and character of ‘the political’ and ‘the cultural’ in ongoing climate science–policy interactions. In three strong acts along with an insightful introduction, contributions to Climate Change Politics: Communication and Public Engagement effectively take readers beyond well-worn laments of science-policy woes and into emancipatory spaces of possibility and innovation in order to confront twenty-first-century climate challenges. For those reasons, this book edited by Anabela Carvalho and Tarla Rai Peterson is one to be considered carefully and closely as we collectively hurtle down shared pathways to our common future.” – Max Boykoff, University of Colorado-Boulder

Anabela Carvalho (PhD, University College London) is Associate Professor in the Department of Communication Sciences at the University of Minho, Portugal. Her research focuses on various forms of environment, science and political communication with a particular emphasis on climate change. She is editor of Communicating Climate Change: Discourses, Mediations and Perceptions (2008), As Alterações Climáticas, os Media e os Cidadãos (2011), Citizen Voices: Performing Public Participation in Science and Environment Communication (with L. Phillips and J. Doyle, 2012) and of two journal special issues. Anabela Carvalho is associate editor of Environmental Communication: A Journal of Nature and Culture and is on the board of directors of the International Environmental Communication Association. She is also a cofounder, former Chair, and currently Vice-Chair of the Science and Environment Communication Section of ECREA.

Tarla Rai Peterson is the Boone and Crocket Professor of Wildlife and Conservation Policy at Texas A&M University, Guest Professor of Environmental Communication at Swedish University of Agricultural Sciences, and Adjunct Professor of Communication at University of Utah. She studies intersections between communication and democracy, with the goal of facilitating community-based conservation that contributes to sustainable public policy. Her current research centers on climate change communication, especially as it relates to energy policy. She maintains an active theory-to-practice program that includes design and evaluation of best practices for facilitating public participation in science and technology issues related to environmental and energy policy. She has published articles and book chapters in numerous academic and trade outlets. Her books include Sharing the Earth: The Rhetoric of Sustainable Development, Green talk in the White House: The Rhetorical Presidency Encounters Ecology, and Social Movement to Address Climate Change: Local Steps for Global Action.

Jim Crowther is a senior lecturer at the University of Edinburgh. He has undertaken research on the role of digital technologies in learning and action for environmental justice in Scotland. He is coordinator of the international popular education network (PEN), which is a global network of academics and researchers with an interest in promoting popular education research and pedagogy. He is the coauthor of Learning and Education for a Better World: The Role of Social Movements and the editor of the international journal Studies in the Education of Adults.

Andrea Feldpausch-Parker is an assistant professor in the Department of Environmental Studies at the State University of New York College of Environmental Science and Forestry. Her research focuses on environmental communication with interests in conservation of natural resources through communication and cooperative learning among scientists, policy-makers and the general public. Her current focus is on climate change mitigation and adaptation strategies, with additional interests in natural resources management and policy, energy policy, public participation in environmental decision-making and social movements.

Joyeeta Gupta is Professor of Climate Change Law and Policy at the Vrije Universiteit Amsterdam and of water law and policy at the UNESCO-IHE Institute for Water Education in Delft. Her expertise is in the area of environmental law and politics. She is editor-in-chief of International Environmental Agreements: Politics, Law and Economics and is on the editorial board of several journals. She was lead author in the Intergovernmental Panel on Climate Change and the Millennium Ecosystem Assessment. She is on the scientific steering committees of many different international programmes including the Global Water Systems Project. She has authored and edited several books on climate change including The Climate Change Convention and Developing Countries - From Conflict to Consensus? , Our Simmering Planet: What to do About Global Warming, Climate Change and the Kyoto Protocol: The Role of Institutions and Instruments to Control Global Change, Issues in International Climate Policy: Theory and Policy, and Climate Change and European Leadership: A Sustainable Role for Europe.

Shane Gunster is an associate professor in the School of Communication at Simon Fraser University, Canada. His research interests include critical theories of culture (especially Frankfurt School), advertising and consumer culture, political communication (especially neo-conservative political discourse) and news media analysis (especially talk radio and coverage of environmental issues). He is the author of Capitalizing on Culture: Critical Theory for Cultural Studies and numerous journal articles and book chapters.

Anna Maria Jönsson is an associate professor at the Department of Culture and Communication at Södertörn University, Sweden. Her research interests are in journalism and the public sphere, environmental governance and environmental communication. Several of her recent research projects and publications focus on public participation in environmental discourse.

Callum McGregor is a PhD candidate in Education at the University of Edinburgh, supervised by Jim Crowther. He holds an MSc in Community Education and an MSc in Educational Research. His current research focuses on the cultural politics of contemporary environmentalism in the United Kingdom, through studying the public discourse of various activist milieus. He continues to work part time as a community educator.

Robert Næss is an associate professor in the Department of Interdisciplinary Studies of Culture at the Norwegian University of Science and Technology (NTNU). His main interests are in Science and Technology Studies, and he has published articles in national (Norwegian) and international journals on climate adaptation, public understanding of climate change, and development of new renewable energy technologies.

Israel Parker is a postdoctoral researcher in the Department of Wildlife and Fisheries Sciences at Texas A&M University. His primary research is focused on wildlife ecology and management particularly with overabundant or nuisance populations, and endangered or “at-risk” species, with side ventures into public participation and social movements pertaining to wildlife conservation and climate change.

Andrea Polli is currently an Associate Professor of Art and Ecology with appointments in the College of Fine Arts and School of Engineering at the University of New Mexico. She holds the Mesa Del Sol Endowed Chair of Digital Media and directs the Social Media Workgroup, a lab at the University's Center for Advanced Research Computing. Polli's artwork with science, technology and media has been presented worldwide and has been recognized by numerous grants, residencies and awards including a NYFA Artist's Fellowship, a Fulbright Specialist Award and the UNESCO Digital Arts Award. Her most recent book is Far Field: Digital Culture, Climate Change, and the Poles.

Marianne Ryghaug is Professor of Science and Technology Studies in the Department of Interdisciplinary Studies of Culture, NTNU, and Deputy Director of the Centre for Renewable Energy Studies (CenSES). She holds a PhD in political science from the Norwegian University of Science and Technology (NTNU). She has conducted research in energy and climate since 1999 and has published widely on these topics in top international journals such as Public Understanding of Science and International Studies of Philosophy of Science. Her research interests are energy and climate-related science communication, policy and implementation and use of new sustainable energy technologies.

Eurig Scandrett is a lecturer in sociology at Queen Margaret University, Edinburgh. After an initial career as a research scientist in plant ecology, he spent 15 years in adult education including as Head of Community Action at Friends of the Earth Scotland. His research interests focus on knowledge generation and distribution in environmental justice movements and he has published on lifelong education, environmental justice and the political ecology of knowledge. He edited Bhopal Survivors Speak: Emergent Voices from a People’s Movement and coauthored Learning and Education for a Better World: The Role of Social Movements. He is an active campaigner for environmental and social justice.

Sarah Schweizer is a program associate at the International START Secretariat in Washington DC. She coordinates and manages the implementation of activities under START's risk management, vulnerability, and adaptation portfolio. Her research activities and practice focus broadly on capacity building and human-environment interactions and more specifically on climate change adaptation, participatory research, social learning, and communication. Her work has appeared, inter alia, Science Communication, and Human Dimensions of Wildlife: An International Journal. Sarah holds an MSc in human dimensions of natural resources and a BSc in environmental communication from Colorado State University.

Jessica L. Thompson (PhD, University of Utah) is an assistant professor in the Communication and Performance Studies Department at Northern Michigan University. She has published on climate change communication and public lands in numerous journals, including Science Communication, Society & Natural Resources, Environmental Modeling & Software, and Human Dimensions of Wildlife.