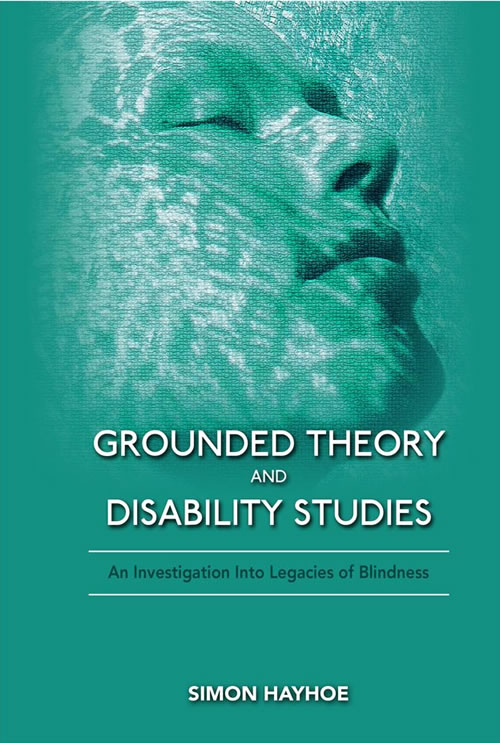 Grounded Theory and Disability Studies: An Investigation Into Legacies of Blindness by Simon Hayhoe

“Presents a very real picture of what it is like to conduct fieldwork, with the pressures of limited time and funding in a volatile political climate … the book is a strong representation of many of the real life issues faced by researchers conducting in-depth qualitative research. The book would provide fodder for very interesting classroom discussions in qualitative methods classes, both within and outside disability studies programs.” – Disability and Health Journal

Why a book on a research study using grounded theory, a methodology that is currently celebrating its 50th anniversary? Although the theory has now been in existence for many years, there has never been a book recounting its application through numerous interconnected studies, as it was originally intended to be used.

This book represents the first book-length cohesive narrative on how this method was rediscovered by a researcher over the course of a new series of studies, redeveloped in the context of a topic previously undisturbed, applied, poked around, and problems generated (with solutions to these found or not). There has never been a narrative on how a researcher sat down and worked through data over decades in order to evolve his or her own grounded theory and methodology about a specific phenomenon.

This study is also a response to the need for a book that mixes the three traditional genres of the literature on methodology—many of which are cited and are themselves subjects—and also adds to a debate on research about research methods, by developing a case study of what it is like to be the human subject that is called the researcher as well as a pursuant of empirical methodology.

The purpose of this book is to break a number of the conventions of research texts by writing an academic text on methodology as a case study of building case studies, one that cites classic works in the field and contains autobiographical considerations throughout its account, one that narrates the conscious process of designing a framework from the range of philosophies that were involved in chronicling this topic. Most importantly, however, this book has developed to be the story of being a human enquirer, one with a research and professional trajectory to work towards.

This study also offers a wholly different approach by describing the processes and evolutions that brought the author Simon Hayhoe to develop what he terms a grounded methodology.

" The sustained and innovative reflective practice evidenced throughout this book represents a vital contribution to the domain of research methodology, and it will be received gratefully by researchers with an interest in forms of educational or social segregation, personal insights into cultural development, the attitudinal responses of research subjects to being the focus of rigorous academic interest, and the ways in which institutions and their practices are researched." – The British Journal of Visual Impairment

“Presents a very real picture of what it is like to conduct fieldwork, with the pressures of limited time and funding in a volatile political climate … the book is a strong representation of many of the real life issues faced by researchers conducting in-depth qualitative research. The book would provide fodder for very interesting classroom discussions in qualitative methods classes, both within and outside disability studies programs.” – Disability and Health Journal

Simon is a senior lecturer in the School of Childhood and Education Sciences, and a centre research associate in the Centre for the Philosophy of Natural and Social Science, the London School of Economics. Previously he was a school teacher for twelve years, and a member of faculty at Sharjah Women's College, United Arab Emirates. He was also awarded a Fulbright All Disciplines Scholar's Award in 2011 to take an appointment as Fellow at the Metropolitan Museum of Art, New York. Simon has a PhD and MEd by research in the study of blindness and the arts - his PhD was co-supervised by Professor John Hull, author of 'Touching the Rock'.

During his school teaching career he was head of department in two schools, taught design, information technology and computing, key-worked students with special educational needs, and devised inclusive courses for school students. In intervening years, he was a research officer at the universities of London and Toronto, and undertaken guest lectures at the London School of Economics, Harvard, MIT, UC Berkeley and Brussels’ Vrije (Free) University. Simon is involved with social, psychological and philosophical research in the field of visual culture and blindness, the study of disability, methodology, computing, and inclusive technology. He has also been involved with the charities Art Beyond Sight (New York, US), The Beyond Sight Foundation (Mumbai, India) and SonoKids (Netherlands / Australia) in a consultative capacity.

Simon has written three research monographs, the first two on blindness and the third on research methodology. His single authored articles also appear in journals, such as special issues of the Harvard Educational Review, British Journal of Visual Impairment, and Disability Studies Quarterly. He has also published numerous book chapters in collected works, and is one of the series editors of the last two volumes of e-Learning in Action.