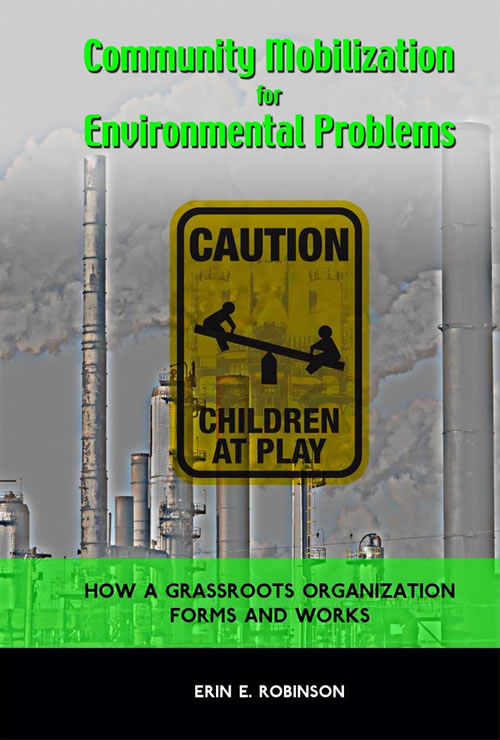 Community Mobilization for Environmental Problems: How a Grassroots Organization Forms and Works by Erin E. Robinson

"This book significantly contributes to our understanding of environmental conflicts, community resources, and movement mobilization ... it is valuable not only for those contributions, but also for bringing attention to the larger social significance of contaminated communities."" - Professor Sherry Cable, University of Tennessee

Given the advent of modern environmental problems, citizens are more than ever faced with decisions over how to act when faced with information concerning the health and safety of their environment. This study addresses community mobilization through the emergence of an environmental grassroots community organization. Social movement research provides a backdrop for understanding that, when faced with uncertainty about the risks of environmental contamination residents may organize as a group to work through these issues. However, the information on which they base their actions is often unclear and leads to multiple sources of information from which to draw. As citizens socialized to trust science, more often individuals find themselves engaging with other sources of knowledge for information. Media, government, science, and other forms of localized knowledge emerge as equally viable sources. Here, the question of whether to mobilize is likely influenced by the frames of information individuals have access to.

While social movement research has focused on mobilization efforts, the context of this book focuses on the complexities of the mobilization process. Framing in social movements has looked at how individuals make decisions and on what information they base those decisions. Environmental problems provide a unique opportunity to study mobilization efforts because of the lack of consensus science surrounding the risks from such problems. Despite this uncertainty, however, citizens are expected to be informed decision makers. Often times unsure of whether their decisions are in fact protecting the health and safety of their families and communities, individuals are moved to act based on conflicting information from informational frames.

Mobilization is often considered a unified, holistic process. Few studies have attempted to dissect the process into its individual components. Considering each aspect of mobilization––issue emergence, organization, leadership, strategy, and goals––allows for a more complete look at the intricate and nuanced relationships inherent in the mobilization process. This book brings together information from the mobilization and frame analysis research to better understand the influences that knowledge framing has on the mobilization process in a specific community fighting to realize the truth about the risks of environmental contamination.

Despite the wealth of information describing social movement activity, studies that focus attention on the intricacies of community relationships within the mobilization process are few. Attention is given in this context to the community struggle to determine parameters of health and safety in the face of environmental contamination. This focused effort draws on detailed analysis of community relationships with the media, science, government and community members themselves. Over the course of five years, the author, sociologist Erin Robinson, has uncovered the ways in which community members come to understand the environmental problems they face. This book offers an explanation for how communities faced with environmental contamination can begin to make sense of that reality. The story of this community serves as a case study for how complex efforts to understand a problem facing one’s community can be.

Through a detailed qualitative analysis of in depth interviews, document analysis, and field research, Robinson traces the beginning of a community social movement throughout the life of the movement effort. Whereas many studies of mobilization are historical, this study offers a close analysis of mobilization efforts as they were occurring. The story of how changes in mobilization occur is demonstrated by how individuals gain information from different sources and frame the issues leading to mobilization activities. Overall the book not only contributes to an understanding of why community mobilization occurs, but helps explain that as well.

This is an important read for students, researchers, and community groups alike. This book provides sociological context to environmental problems that would be useful in courses and library collections in sociology, social movements, community and environmental studies.

"This book significantly contributes to our understanding of environmental conflicts, community resources, and movement mobilization. It stands with works such as Phil Brown and Edwin Mikkelsen’s No Safe Place and Suzanne Marshall’s Lord, We’re Just Trying to Save Your Water, but it has the bonus of a focus on movement processes. The book is valuable not only for those contributions, but also for bringing attention to the larger social significance of contaminated communities." - Sherry Cable, Professor and Director of Graduate Studies, University of Tennessee

Erin E. Robinson is an associate professor of sociology and director of environmental studies at Canisius College in Buffalo, NY. She holds a PhD from the University at Buffalo, an MA from the University of Tennessee, Knoxville, and a BA from the State University of New York College at Geneseo. Her previous research focuses on environmental contamination in Love Canal, NY and has been published in journals such as Sociological Spectrum and Qualitative Sociology Review. She has served as the Chair of the Environment and Technology Division for the Society for the Study of Social Problems for 2000–2002 and 2010–2012.